On the eve of 27 January – International Holocaust Remembrance Day – Centre for Civic Education (CCE) uses the opportunity to pay a tribute to millions of victims perished in Holocaust during World War II, and to highlight the importance of education and culture of remembrance for everyone who gave their contribution to the fight for equality, tolerance, solidarity and responsibility.

Nowadays, xenophobes extend and create divisions where they could not even be foreseen. Instead of mutual appreciation, members of another nation, religion, race, gender and sexual orientation are often under the attempt to being humiliated by hate speech or direct physical violence. In the midst of migration of peoples from war-torn countries, it is not a small number of those who instead of welcome and shelter are receiving exclusion accompanied with crude violation of their elementary rights. 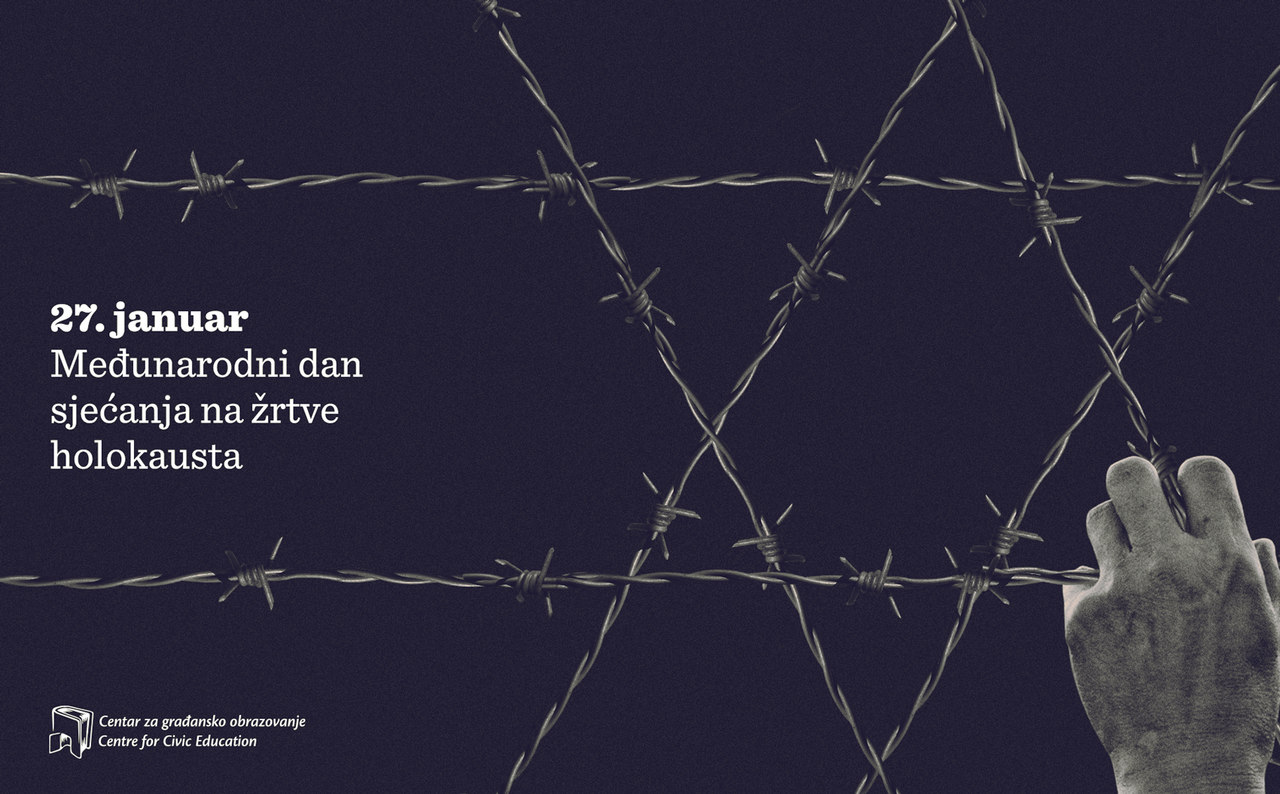 However,it is encouraging that official policies in majority still do contain non-tolerance towards hate speech, towards promotion of fascist ideals and acts of Fascist and Nazi leaders, as well as their national collaborators, and negation of Holocaust and other crimes. This indicates that Europe is still firmly on the position of zero tolerance towards fascism. However, everyone is personally responsible for their reaction to violence as well and chooses whether s/he will ignore it or be solidary with victims. It is especially important to repel the increasing history-revisionism that has gained its momentum.

Due to more and more noticeable use of anti-Fascism as a term in official political vocabulary of certain European countries, Montenegro as well, the CCE has pondered this phenomenon via analysis ‘Anti-Fascism in Montenegro – between political trend and educational policy’. Key findings indicate thateducational policies are not created in direction of boosting critical thinking and encouraging dialogue as concept that can prevent occurrence and development of dangerous ideologies and single-mindedness, and this approach needs to be changed.

The fact that the World War II has wiped out more than six million of Jews, obligates us also at the human level to remember the Holocaust, so that such monstrosity shall never happen again. Therefore, the CCE reminds every year about importance of day of remembrance of Holocaust victims, but also about strengthening the national educational policy based on facts. Facts are defence against oblivion and xenophobia, and it is a responsibility of decision-makers and especially educational authorities to encourage critical opinion and development of culture of remembrance of Holocaust, via educational system.

The 27 January is being marked as International Holocaust Remembrance Day, since on that day the concentration camp Auschwitz-Birkenau, the largest and most notorious camp of Nazi Germany was freed in 1945. More than 1,300 000 persons from the entire Europe, among which Jews were in majority, were deported to this camp, of which 1,000 000 were murdered. UN General Assembly has passed an official resolution about marking the International Holocaust Remembrance Day in 2005. The Resolution appeals to all UN members to respect the memory on victims of Holocaust and encourages development of educational programmes on history of Holocaust, thus wishing to demonstrate determination to aid in preventing genocides in the future.