Centre for Civic Education (CCE) has researched data on number and manner of examinations of irregular pupils in Montenegro, the amount of incomes that schools have as per this basis and the manner of allocation of these incomes, and the data are summarised in the analysis Irregular Pupils in Montenegrin Educational System.

The focus of research were 48 state educational institutions which provide secondary education. The data have been requested for period from 2012 to 2017 about number of pupilswho took exam for irregular grade for each year individually; number of those who passed the year and the number of those who did not pass; amount of funds received by school as per irregular examination of pupils in this period; as well as how much has been allocated for fees for examiners. Furthermore, lists of all members of commissions for irregular examinations as per deadlines and years were also sought.

Out of 48 institutions, 45 has responded to the request of CCE, whereby 42 institutions submitted fully or partially the requested information. More precisely, 41 institutions have submitted data on received funds, and 36 of them about the amount of funds allocated for examiners. Mixed-High School ‘Danilo Kis’ Budva has submitted formal response on procedures in relation to this issue in this school, but not the requested information about number of these pupils and received funds. Educational Centre Pluzine and Educational Centre Savnik have not published the call for enrolment of irregular pupils since their establishment, nor have they organised irregular examination, of which they have orderly submitted the information. Unfortunately, three secondary schools have not submitted any information despite numerous urgencies: Vocational High School Berane, Electro-Economic High School Bijelo Polje and VocationalHigh School Pljevlja.

On the basis of irregular examinations in Montenegro, in last five school years, 41 schools received 3, 026 586. 00 EUR. This does not include five schools that have not submitted data to CCE, among which are also those with significant number of irregular pupils and incomes as per this basis.

The allocation of fees is structured as follows – 35% for examiners, 13% for head of commission, 12% for permanent member of commission, 10% for administration costs and the rest for improvement of conditions for educational work.

There are considerable discrepancies in the number of pupils in relation to the income received in certain schools. For example, in the last five years, the Maritime High School from Kotor has had 705 irregular pupils, from whom it has generated 41,586 EUR of income. On the other hand, the Engineering and Geodetic High School ‘Engr. Marko Radevic’ from Podgorica had four times less pupils in the same period, i.e. 162 irregular pupils, and three times larger income, i.e. 134,552 EUR. 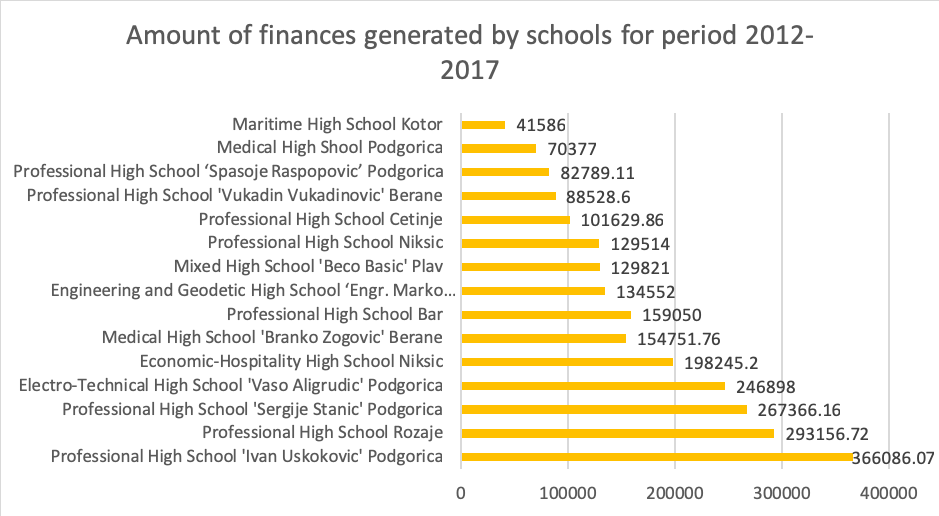 The required information on members of the commissions for examination indicated slight changes in the composition of the commissions in the last five years for the part of the high schools. In that respect, the following are leading: Electro-Technical High School ‘Vaso Aligrudic’ Podgorica, Mixed High School ‘17th September’ Zabljak, Mixed High School ‘Beco Basic’ Plav and Gymnasium ‘30th September’ Rozaje. On the other hand, a positive example is the Vocational High School ‘Spasoje Raspopovic’ from Podgorica, which, according to the CCE’s available data, which has been determining the composition of commission members in the most proper manner and gave the opportunity to various professors to participate in the work of these commissions and to generate income on this basis as well.

Decline in the total number of regular pupils in secondary schools from 2012 to 2017 was recorded (over 4,000 pupils less), but also smaller enrolment of irregular pupils as well as examinations (over 800 pupils less), whereby the number of irregular pupils is not final. In the conversations with the authorised persons in the schools, the CCE research team noted that they see the reasons for the decline of the number of pupils in enrolling into secondary schools across the region and broader. However, the CCE indicates also the evident year-by-year decline of birth-rate, and there is no data on the number of those who do not enrol or drop out the high school. Hence, it is necessary to make an analysis which will determine the number of pupils who have not continued their education in secondary schools, which is otherwise not mandatory, although it undoubtedly renders them more competitive in the labour market.

A large number of schools do not make changes in the composition of the members of commissions for irregular examinations, which puts certain number of professors into privileged and others in discriminatory position. It is necessary to prescribe rotations in these commissions to be made as per rulebook, including also administrative staff and presidents.

The number of irregular pupils in secondary schools in Montenegro does not exist in the Monstat reports, and the CCE’s experience is that this data is difficult to obtain, as well as that there are non-transparent educational institutions that refuse to provide this information. Therefore, the CCE recommends establishment of an obligation for all institutions to, in addition to information on regular pupils, provide information on irregular ones as well, and for this to be made available in Monstat reports.

The Ministry of Education does not keep records i.e. there is no database for the number of approved irregular examinations, but the schools are the ones in charge of it, due to which the introduction of an application for monitoring of irregular examinations and supervision of allocations of income received on that basis should be accelerated.