All media and journalists in Montenegro have unique code of ethics, but there is no unique self-regulatory body at the level of the entire media community that takes care of respect of journalistic ethics, nor the indication that it could be established soon. Furthermore, the trend of violation of professional standards and ethics has marked recent years, as it was assessed at the presentation of a study of the Centre for Civic Education (CCE) regarding self-regulation of the media Conscience of the Fourth Estate, produced within the project Facts Do Matter. 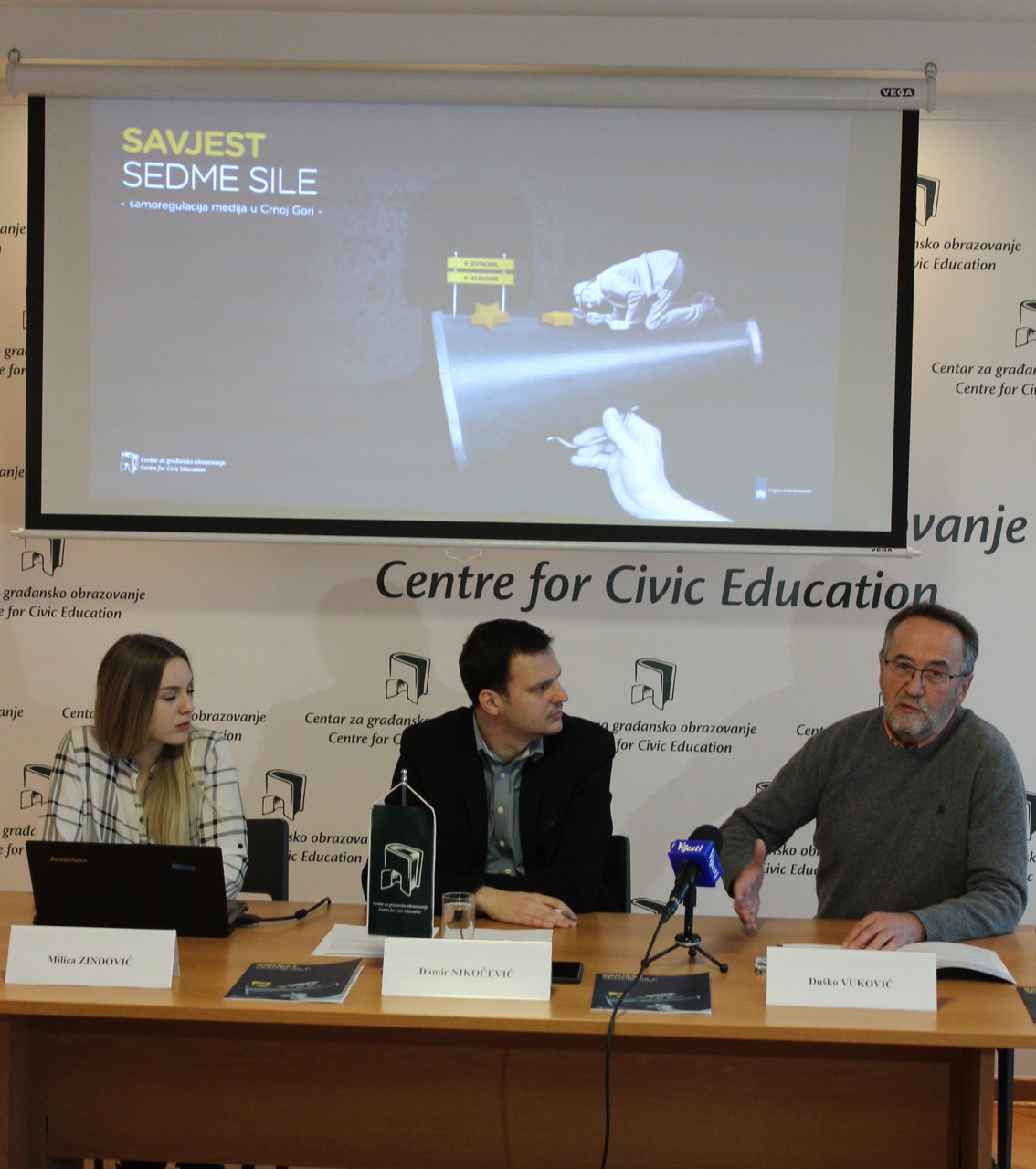 Dusko Vukovic, the main author of the publication, reflected upon the most important findings, stating that the issue of self-regulation is not of a newer date, although it is becoming more and more actualized. ’Self-regulation existed in the previous system as well. At that time, the journalistic community was organized into a unique Association of Journalists of Montenegro that was member of the Alliance of Journalists of Yugoslavia, which represented one larger association at the level of the former SFRY. In both of these associations, and the main Alliance, there were ethical commissions that dealt with the Code of Journalists, which was unique at the level of Yugoslavia. Then the break-up of this state occurred, and much was forgotten both in the journalistic profession and in other professions as well.’ He also recalled the further development of journalistic associations in Montenegro, especially the positive role of the Montenegrin Media Institute in initiating the work and the adoption of a joint Code of Journalists of Montenegro. ’Since then, no one has ever questioned this unique Code, which is good. However, what has been questioned is – how to find an appropriate model that will ensure the implementation of ethical principles and provisions of that Code. The first attempt was to monitor the media scene and to point to challenging issues when it comes to violation of the Code. Subsequently, the formation of unique self-regulatory body followed, which, unfortunately, did not function well and has fallen apart precisely due to the question of the interpretation of the Code in one particular case.’

Vukovic also pointed out the fact that the OSCE Office tried to restore that state of affairs to the starting point in order to form a single self-regulatory body again, but also to possibly improve the Code itself. ‘A clear differentiation of the two groups of media then occurs – those who uncritically support the government and the others who are critically oriented towards what is political and social reality in Montenegro. And such constellation we still have. One media group has its own external self-regulatory body – Media Council for Self-Regulation, and on the other hand, we have a model of ombudsman in the media. There were attempts to reach unique self-regulatory body, such as the initiative of the former president of the country, Filip Vujanovic, since the authorities needed this in order to tick-off yet another box for Brussels.’

Vukovic concluded that there is no need for unique self-regulatory body, nor that anyone forces the media to that option. ’It would certainly be preferable, because in this manner we would send a message to the public that we have unity, unique position within the journalistic and media community towards something that is journalistic ethics. But, the community has expressed it via the Code, and how will it be interpreted in a daily professional practice remains on every media to decide individually. A model in which every media has its ombudsman is by far closer to me, because I think the issue of journalistic professional conscience and ethics is much easier to be brought closer to the editorial team than to have some external authority that will be taking care of it. This is exclusively the issue which people in the editorial team should deal with daily – from the editorial board to the direct work of the editors with the journalists on individual stories.’

CCE Development Coordinator, Damir Nikocevic, stated that ’the recommendations of the study towards the establishment of self-regulation of media in Montenegro are based on the balance between what should be the ideal state i.e. the establishment of ethical standards that will improve both the overall quality of reporting and constraints and opportunities that we identified in the Montenegrin context’. Accordingly, he said that one of the CCE’s recommendations states  ’one should not insist upon a single self-regulatory body, nor regard its absence as an insurmountable disadvantage. It is more important to strengthen the functionality, transparency and expertise of the existing self-regulatory bodies, rather than try to artificially scale down to one formal one whose decisions some media would not accept’.

Nikocevic pointed out that ‘in addition to equal opportunities for the existing self-regulators, their cooperation on the smallest common denominators should be encouraged‘. In addition, he also stated that ‘all media, and not only those which have ombudsmen, must provide permanent sources of income for the effective functioning of self-regulatory bodies in the manner envisaged by the acts of their establishment, while thereupon safeguarding the independence of those bodies. It is not acceptable that the state prescribes the obligation of media self-regulation, nor to favours some of the self-regulatory models and practices through financial support or otherwise. Precisely the preferential financing, in the Montenegrin socio-political reality, would be a dangerous entry of the authorities into a banned zone and the collapse of the concept of self-regulation of the media.’

’Regulation and self-regulation must be clearly separated. Therefore, new legal solutions should exempt the Agency for Electronic Media from the obligation to, by deciding upon complaints, get involved in issues that need to be in the explicit jurisdiction of self-regulatory bodies’, concluded Nikocevic.

Project Fact Do Matter is supported by the Embassy of the Kingdom of Netherlands, with the objectiveto contribute to establishment of favourable ambient for free, professional and ethical reporting of media relieved of exterior pressures. More specifically, project aims to influence the improvement of media legislature and to support journalists who report on complex process of democratisation and Europeanisation of Montenegro in a quality manner, as well as to strengthen cooperation between media, relevant institutions, political parties and non-governmental organisations in this area.