Two-thirds of citizens in Montenegro consider that the use of violence to realize political, social and religious aims is not justified. However, one-third states that there are situations when violence can be justified in order to achieve these objectives, which represents potential for radicalization and requires multisectoral preventive response, as indicated by data from the public opinion survey about attitudes towards violent extremism and radicalism which the Centre for Civic Education (CCE) presented today. 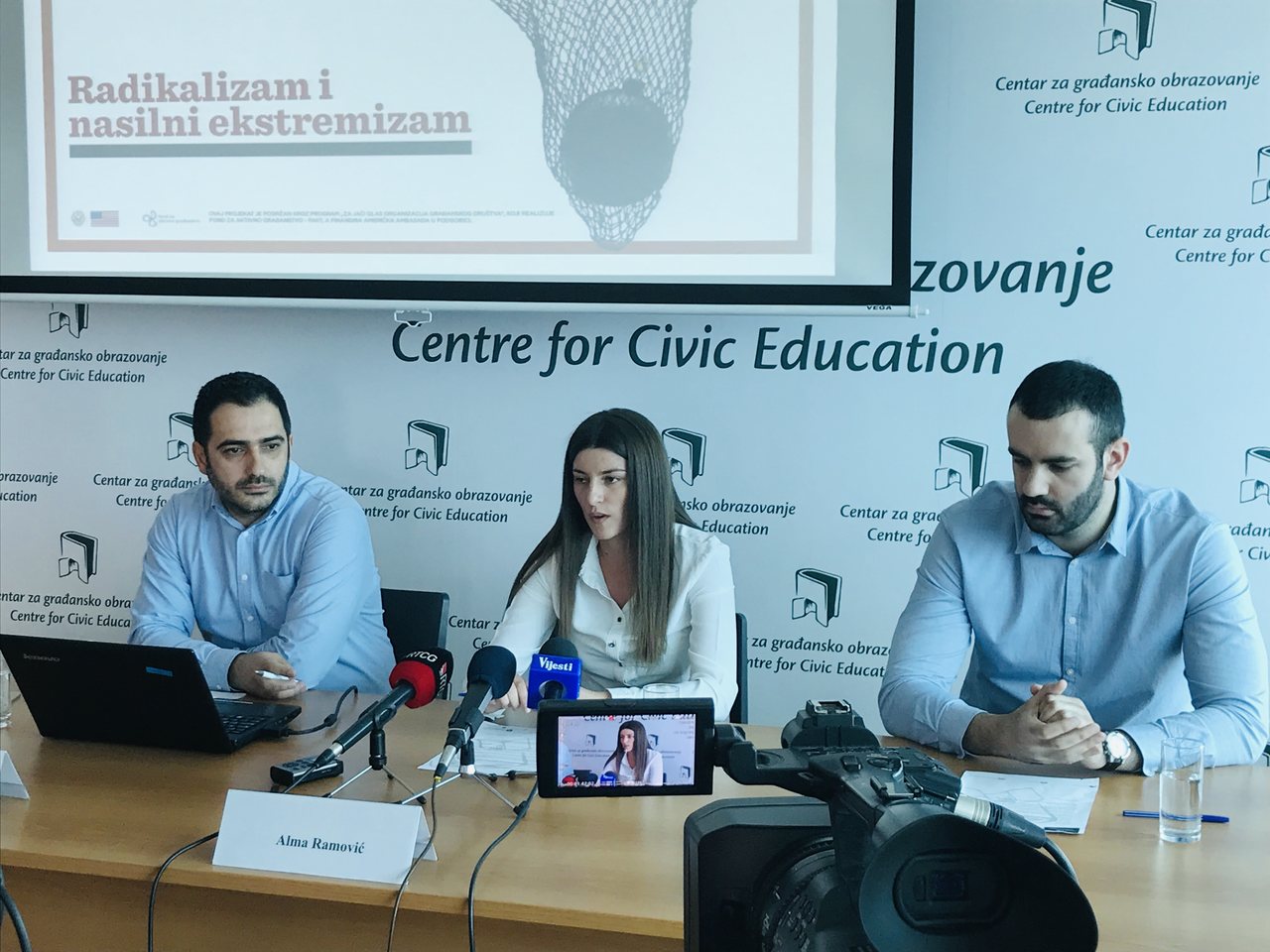 ‘Although divided in attitudes, optimism about the current situation in Montenegrin society is present to the greater extent. Hence, 48% of citizens deem that Montenegro is moving in the right direction, while 45% believe that we are going the wrong way. Amongst the biggest problems that Montenegro faces today is they state unemployment, followed by organized crime, bad economic situation, low level of living standard, corruption and poverty‘, said Petar Djukanovic, Human Rights Programme Coordinator, presenting key findings of the research.

Somewhat less than three-quarters, e.i. 7 of 10 citizens of Montenegro assess that the position of young people is bad, and almost half of them considers it as very bad.

Djukanovic further emphasized that ‘when it comes to expected changes in the quality of life in the next year, there is noticeable general perception of stagnation, as half of citizens do not expect any changes, while quarter expects deterioration, and only fifth improvement.’

When it comes to identity issues, citizens connect their identity with the state of Montenegro (89%) and birthplace or region which they come from (88%), then with their ethnic identity (73%). They consider themselves the least as citizens of Europe (64%) and cosmopolites (56%).

The attitudes towards the presence of democracy in Montenegro are divided. Although the vast majority of citizens believes that the principles of democracy are present only on paper, the majority believe that there is freedom of thought. Attitudes are also divided when it comes to the respect of human rights and freedoms, citizens’ influence on decision-making processes in the country, as well as how much institutions work in the public interest. A little more than third consider that there are situations where an undemocratic system of governance can be justified.’

‘Three quarters of citizens of Montenegro state that they feel safe in their surroundings. Personal sense of security is balanced amongst various socio-demographic groups to which they belong, with the exception of slight regional differences. Amongst the greatest security threats are organized crime (65%), economic crisis (46%), corruption (42%), as well as dysfunctional political system (29%). External threats are rarely stated as security risk‘, said Djukanovic.

The main source of trust for the citizens of Montenegro are members of their family (97%) and friends (89%), and least trusted are people with different political beliefs (64%) and co-workers (56%). In overall, distrust is more present within pessimistic citizens, or those who believe that Montenegro is moving in the wrong direction.

Djukanovic pointed out that in this period a certain decline of trust in institutions is registered, growing confidence in civil society (NGOs and media), but also visible crisis of representative democracy. Church traditionally generates the highest level of trust. Citizens least believe in NATO, political parties and prosecutors.

Speaking about social and ethnic distances, Djukanovic notes that ‘the most disturbing to the respondents would be if political opponent was a person holding function to which they would directly be responsable. On the other hand, when it comes to religion, much higher level of distance is expressed towards family members – on average, one-fifth would be bothered if member of their or parners’ family were different in religion. The situation is similar with ethnicity, which is alarming from the standpoint of fostering multiculturalism in Montenegro.’

Citizens of Montenegro believe that discrimination is the most present on the basis of political opinion (65%) and material status (59), and over two-fifths of the citizens consider that discrimination based on ethnic or religious affiliation is rather or very common, which also confirm the data from the previously presented CCE’s research on discrimination.

Most citizens of Montenegro declare themselves as Orthodox. At the same time, there is great share of those who state that religion is generally important in life and who practise religious services several times per year. ‘Significant majority of citizens believe that it is a duty of true believer to defend the postulate of their faith. At the same time, there is similar percentage of those who believe that religious rules are more just than state rules. Therefore, potential for radicalization is especially noticeable when considering religious framework’, warned Djukanovic.

Djukanovic also stated that ‘four of ten citizens do not consider themselves as being informed about the topic of radicalization and violent extremism. Among others, the attitude towards (non)existence of threats of these phenomena in Montenegrin society is divided. Among those who believe that threat of extremism and radicalism exists, the largest number of them deem that treath with political background is the most present. Media reporting on these issues is negatively evaluated. Also, efforts by competent institutions to improve awareness of the threats of violent extremism are not assessed well’.

Among the most reponsable institutions that should work on prevention of violent extremism are Ministry of Interior and Police, followed by educational institutions, media, political parties, Prosecutor’s office, non-governmental and internationals organizations, and judiciary.

More than half of citizens of Montenegro emphasize that they would try to persuade someone close to give up the idea of going to foreign battlefield. Also, the same number states that they would feel insecure if a returnee moved in their neighborhood. Devided attitudes towards the question whether returnees are threat to Montenegrin society at all are also registered.

‘Somewhat less than half of citizens who believe that returnees are security threat would support their rehabilitation and reintegration. The prevailing attitude is that the competent state institutions, but also families of returnees, are those who should take care of that the most’, Djukanovic concluded.

Djukanovic announced that on the basis of this research and analysis of the legislative and institutional framework, CCE will develop recommendations for improving the role of the education system in the prevention of radicalization and violent extremism, as well as access to transitional justice as closely related area.

Vasilije Radulovic, CCE Programme assistant, explained that field research was conducted from 2 to 11 March 2019, including 1022 respondents. A three-step random representative sample was applied, within the adult population of 17 Montenegrin cities, and taking care about indicators of gender, age and regional representation. 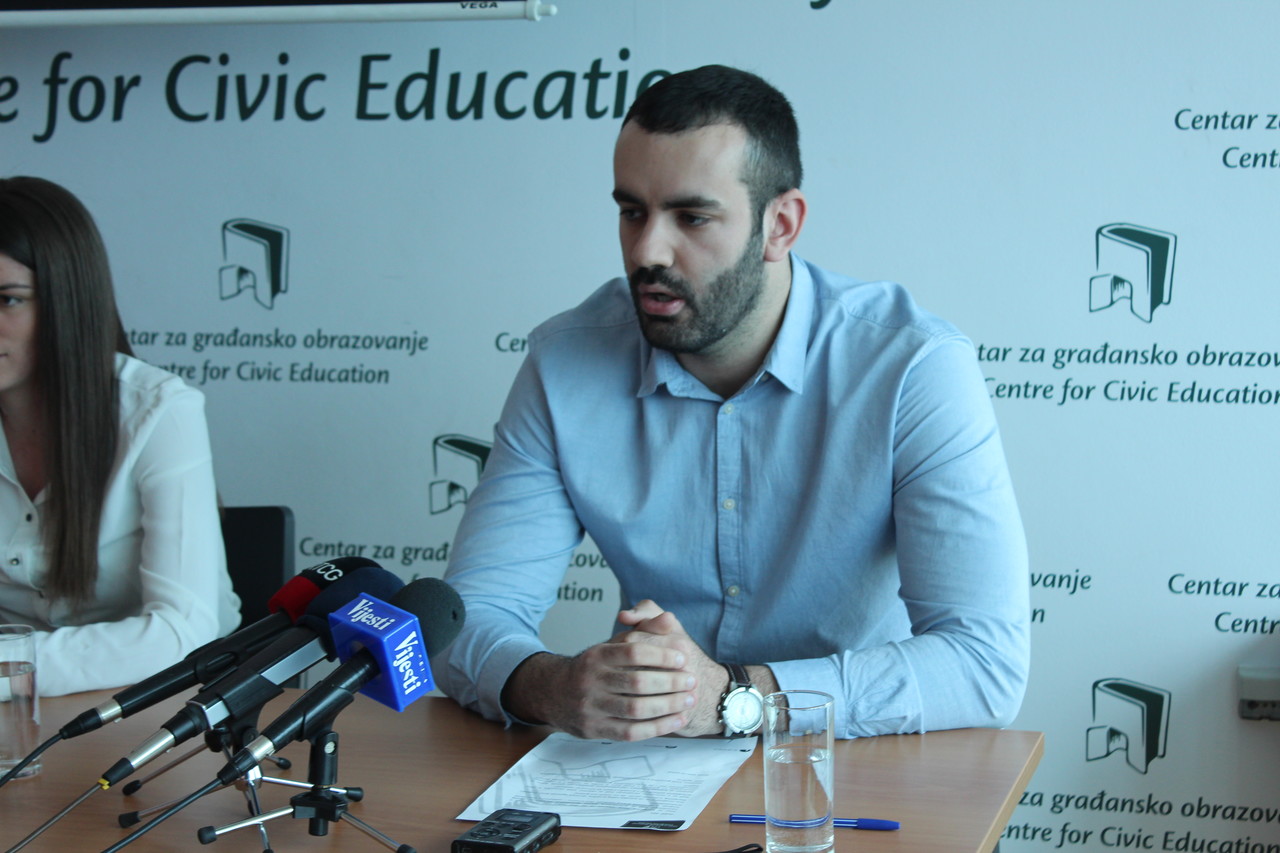 The research is part of the Safe Net project, which aims to contribute to reduction and prevention of radicalization trend in Montenegro by strengthening culture of social dialogue on controversial and extremist issues, as well as strengthening democratic processes as key prevention of escalation of terrorism and violent extremism in their various forms. Additionally, the project places the role of education in the prevention of violent extremism, but also the importance of promoting culture of social dialogue and cooperation, democratic values and human rights principles as preventive mechanisms against terrorism and violent extremism. This project is supported through the programme For strenger voice and influence of civil society, implemented by the Fund for Active Citizenship – fAKT, and financed by the US Embassy in Podgorica. The expert part of research was performed by agency Ipsos Strategic Marketing.