Human rights in Montenegro are not a priority for the decision – makers, human rights culture has not come to life, which has a reflection on effective respect of these rights, assessed Executive Director of the Centre for Civic Education (CCE), Daliborka Uljarevic.

At the presentation of key findings of the report on human rights affairs in Montenegro – Human Rights Barometer, she explained that the report gives an overview of the human rights situation for the period 2017 and 2018, and part of 2019, and identifies key challenges in achieving the standards in this area. 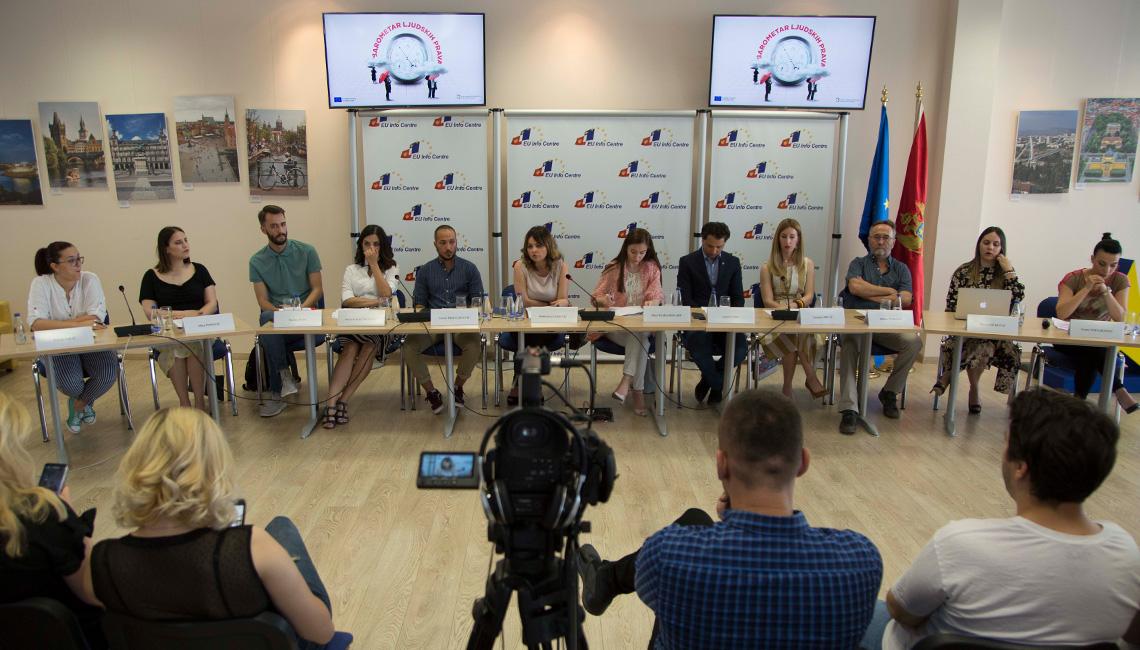 Legal adviser in the Union of Free Trade Unions of Montenegro (USSCG), Ivana Mihajlovic, assessed that the right to an adequate standard of living is most often violated in Montenegro.

‘The data from the previous year which shows that over 23% of citizens of Montenegro are at risk of poverty is devastating, and more than ten percent of citizens are at risk of social exclusion. Every fourth citizen lives at poverty threshold, which is estimated at 174 euros, while the minimum salary that earn more than 50 thousand people, is 193 euros,’ stated Mihajlovic.

She noted that in recent years there has been no records of major job creation, and that the main characteristic of the labour market in Montenegro remains high unemployment rate.

Representative of Paraplegics Association, Marina Djurovic, stated that the state, although it has ratified the key international documents relating to persons with disabilities, does not fully understand the obligations linked to the specific rights as prescribed by these acts.

‘The most obvious example is the existence of a legal concept of deprivation of their legal capacity only on the basis of disability, which is contrary to the guarantees of the UN Convention. The legal capacity is most often deprived by persons with disabilities to ensure some other rights, mostly in the field of health and social protection. When the case comes to court, judges deprive his/her legal capacity even without the presence of that person,’ explained Djurovic.

She said that the application of legal solutions, as well as the measures defined by the Strategy and Action Plans are slow and ineffective, which is why they are in a very serious socio-economic situation.

Executive Director of NGO Young Roma, Samir Jaha, reminded that civil sector researches indicate that being part of Roma national minority to a large extent, 50.8 percent, results in negative treatment in the society.

‘Also, despite the efforts of the Government and the civil sector, large number of children are leaving school early, and measures adopted to prevent early school leaving, are not implemented efficiently enough,’ said Jaha.

He assessed that, the insufficient representation of Roma in the cultural life of Montenegro, the lack of media content dedicated to the promotion of Roma culture, language and community additionally aggravate the process of inclusion.

Executive Director of the Association SPEKTRA, Jovan Dzoli Ulicevic, said that there are no legal restrictions on LGBTQ persons in the field of the right to participate in social, economic and political life, but he also assessed that the self-initiative for inclusion of this population is missing.

‘This is one of the indicators of our position in society, as this does not indicate the lack of initiative towards LGBTQ, but the environment in which we live,’ Ulicevic said.

He said that cases of discrimination and violence against LGBTIQ persons continue to occur, despite the existence of Law on Prohibition of Discrimination, which prevents discrimination on the basis of sexual orientation or gender identity, ‘which indicates lack of capacity and political will to firmly sanction such cases.’

Representative of the NGO Womens Rights Center, Marko Jusic, reflecting upon children’s rights said that it is necessary that the state define budgetary allocations for children in unfavourable or endangered living conditions, including Roma, Egyptian and children with disabilities.

According to him, only one child was adopted at the Children’s Home ‘Mladost’ in Bijela last year, and at the end of the year there were 66 kids.

‘Montenegro has made efforts to reform the social and child care system and promote alternative care, which has resulted in decrease in the number of children living in institutions. The number of foster families is increasing, however, the problem that remains is officially smaller number of non-kinship care than foster care, and also the fact that very few children with disabilities are in foster care,’ told Jusic.

The social worker at NGO Juventas, Marija Milic, said that certain healthcare institutions are in a poor condition, which, as she pointed out, hinder their everyday functioning.

‘The civil sector has been submitting for years initiatives for the construction of new Infectious Disease Clinic and Psychiatric Clinic in Podgorica, as well as to improve conditions at the Psychiatric Hospital in Dobrota and to urgently build Prison Hospital. Despite the fact that some of these investments have been foreseen in the capital budget, there are no specific developments for years,’ Milic stated.

Public Policy Researcher at the Institute Alternative, Dina Bajramspahic, stated that in the field of human rights, within the security sector is present monopoly on the legitimate use of force and the secrecy of the work of bodies in the sector.

‘Although there is a very complex control system on paper over the Police Administration, even ten different bodies have the authorisations to exercise control over the work of this state authority. However, in practice, all these bodies are either dysfunctional or with very limited impact on improving the work of this body, especially when it comes to human rights,’ said Bajramspahic.

She assessed that police officers are not sanctioned for criminal offenses in an adequate manner, moreover, they are often progressing in the system, and noted that the competent institutions do not work enough to build a culture of responsibility and respect for human rights by the authorities. 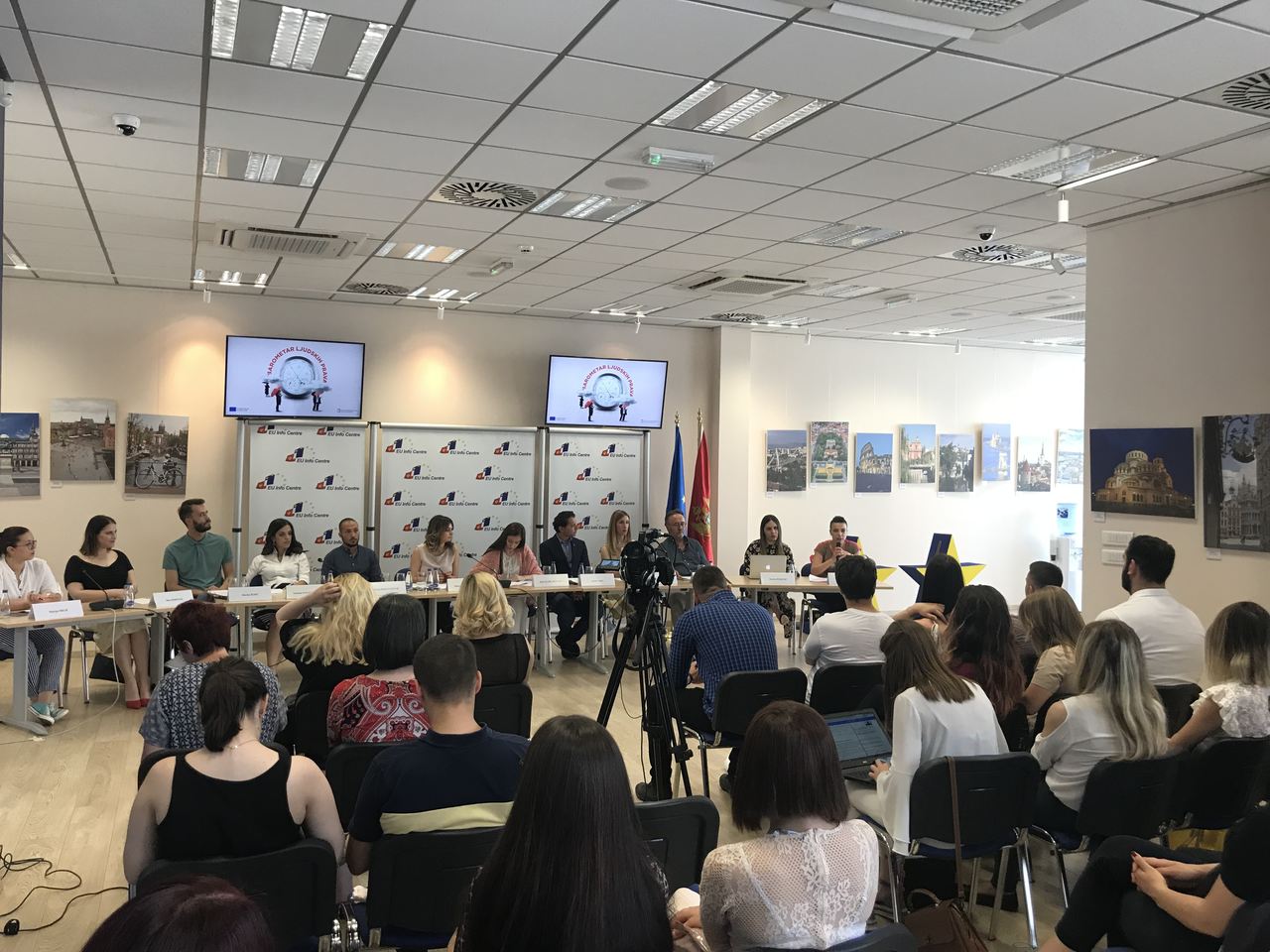 Legal Adviser in the CCE, Snezana Kaludjerovic, speaking about the judiciary, said that the report recorded inconsistency of constitutional and legal provisions, and emphasized the issue of disciplinary liability.

‘Within the observed period, the rate of conducted disciplinary proceedings is extremely low and ranges from one or none disciplinary proceedings, both before the Judicial and the Prosecutorial Council, at the annual level. The shortcomings can be found both in the normative framework and in its implementation,’ stated Kaludjerovic.

Programme associate in the CCE, Mira Popovic, said that a significant number of amended laws were noted in education, but that many of the problems still remain.

‘One of the most highlighted problems in Montenegrin educational system, in terms of human rights violations, is the manner of appointing school directors. Despite the fact that this has been consciously, normatively poorly resolved by the Government as everything is centralized in the hands of the minister who appoints and dismisses directors, in practice has never been recorded so numerous discretionary appointments,’ emphasized Popovic.

Programme associate in the CCE, Tamara Milas, said that in all, so far prosecuted cases of war crimes, four convictions have been handed down, but that they were not even proportionate to the crimes committed.

She pointed out that there are no adequate mechanisms for the protection and support of witnesses who have been involved in lengthy judicial proceedings in the practice so far.

‘Furthermore, in Montenegro, there is no comprehensive programme of reparation for the families of missing persons, not only through material compensation, but also through criminal justice, culture of remembrance through memorials, building memorials. The continuation of polarization in the commemoration of key historical events from the 20th century is noticeable. State institutions only pay attention to a culture of remembrance that can be supportive for daily political points of the ruling structure,’ elaborated Milas.

President of the Assembly of the Media Center, Dusko Vukovic, said that there is no substantial media pluralism in Montenegro.

‘In Montenegro, there are all forms of media, radio, television, portal, and this is a reflection of quantitative pluralism. However, there is no essential media pluralism. The first indication that the state intends to change something in this area is the Draft Media Law,’ Vukovic claimed.

He assessed that this Law would not contribute to the improvement of the position of the media in Montenegro, because it envisages financing of a self-regulatory body which, as he considers, does not encompass all media, ‘but a part that is known as pro-regime’.

Presentation of key findings of the report on human rights affairs in Montenegro – Human Rights Barometer is the final event of the ‘360° – Full Circle for Human Rights’ project that the CCE implements in partnership with Human Rights House from Zagreb and NGO ATAK from Podgorica, funded by the European Union, whereas the Report was co-financed by the Australian Embassy.