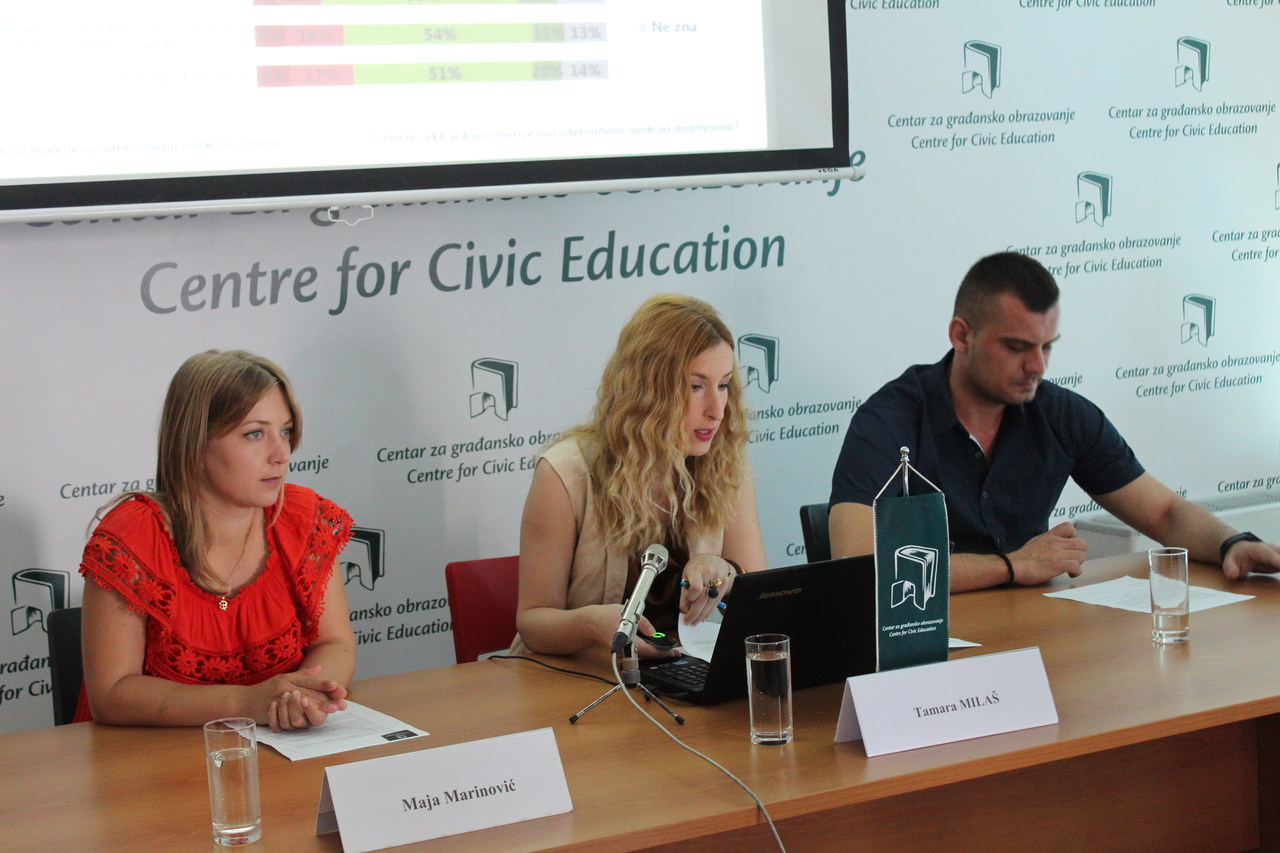 ‘When it comes to the opinion of citizens about the effectiveness of these measures, those who have heard about them, most frequently as effective state ankle bracelets, followed by fine and community service. It is interesting that one-quarter of the respondents do not recognize effectiveness of formal notice. The formal notice, as per Criminal Code, indirectly refers to the obligation of ‘risk assessment’. However, it is left to the jurisdiction of the court without the possibility of expert assistance that should be provided by the probation service, which means that it is necessary to introduce the probation service in this decision-making phase, in order to increase its effectiveness, and therefore the perception of citizens would be improved,‘ Milas elaborated.

One-quarter of citizens say that they know someone who has been convicted, and half of them know that an alternative sanction or probation measure was imposed on that person, and most frequently it was a fine.

When it comes to the contribution of alternative sanctions and probation measures, those citizens who are familiar with this part of the penalty system state that alternative sanctions and probation measures mostly contribute to the reduction of the prison population, and hence the costs that are allocated from the budget for these purposes, but to the prevention of the negative effects of the prison term (separation from the family, school-leaving, job loss, negative influence of other prisoners) and the stigmatization of convicted persons.

‘Unfortunately, significant number of respondents believe that there is no contribution of alternative sanctions and probation measures in crime prevention. It should also be noted that the biggest role in the rehabilitation and resocialization of offenders is the criminal sanction imposed on him/her and accompanying rehabilitation programmes, during the enforcement of the criminal sanction and after the sanction. Still, this is not yet recognized within our community,’ Milas commented.

According to citizens’ assessment, judges and prosecutors mostly contribute to the level of sentence imposed.

‘In the part of ​​familiarity with the system of enforcement of alternative sanctions and probation measures, most citizens (69%) state that they do not know which state authority is charged to implement alternative sanctions and probation measures. Amongst those who state that they know which one is charged, more than 70% of them think that it is a court, which points to their lack of knowledge of this system. Namely, the Court only impose sanctions, and the Criminal Sanctions Enforcement Department of the Ministry of Justice, in charge of Directorate for probation and Enforcement of the prison term in residential premises is actually competent and they implement the Law on the Enforcement of Criminal Sanctions regulating the enforcement of criminal sanctions (punishment, security measures, correctional measures and warning measures), including alternative sanctions,’ Milas further explained.

Almost 7 of 10 citizens of Montenegro claim that a prison term has a greater impact on the offenders than an alternative sanction or probation measure, while only one-fifth of the respondents consider the opposite. Similarly, most Montenegrin citizens believe that alternative sanctions and probation measures are milder than a short prison term up to six months, and two-thirds of them state that the community work is a sufficient and justified punishment for misdemeanour, while a quarter of citizens have a contrary opinion. 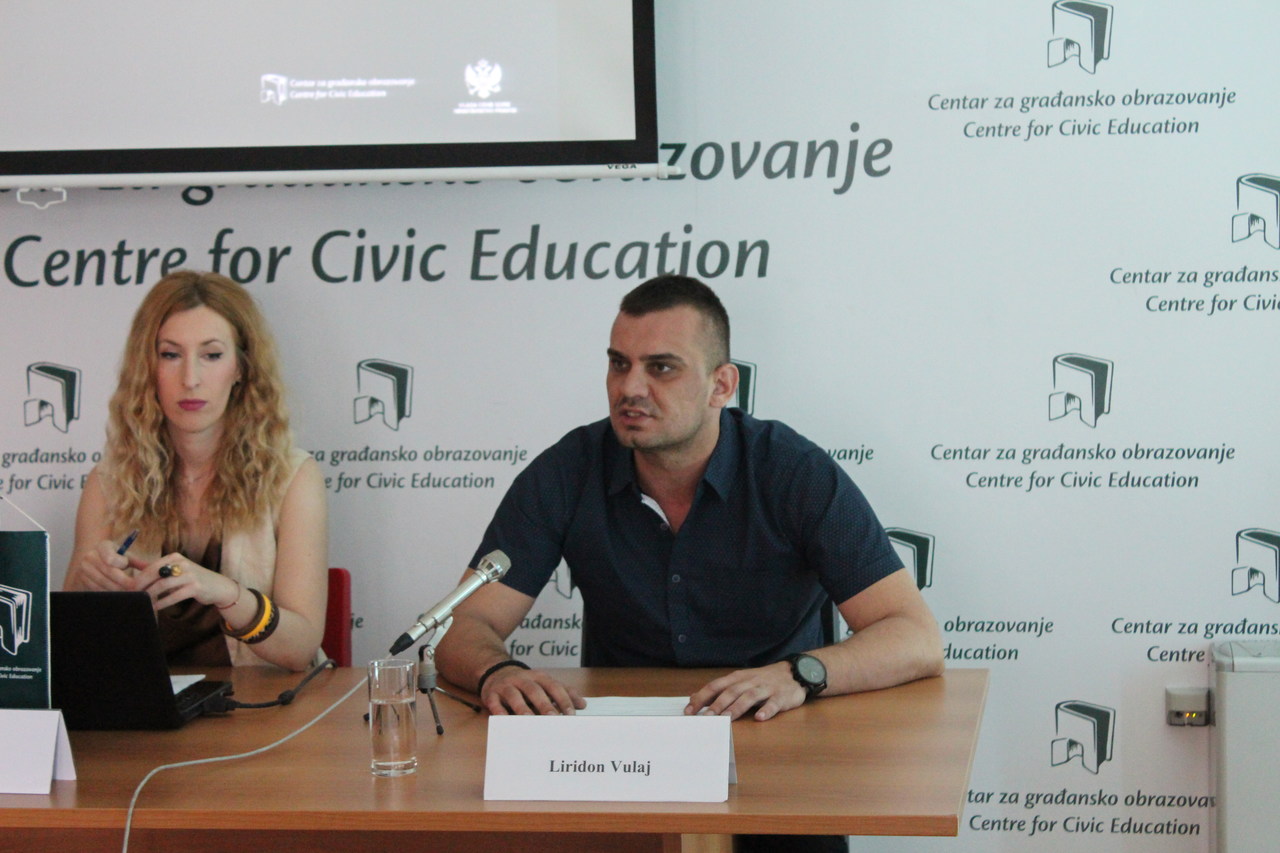 ’Regarding returnees in the commission of criminal offenses, 60% of the respondents consider that they should exclusively be sentenced to prison term, while slightly less than a quarter of citizens are exclusively for the option of imposing alternative sanctions or probation measures. In addition, majority of citizens (60%) think that prison term is preventing recidivism, contrary to one-fifth (19%) who believe that this measure contributes to recidivism,’ Milas stated.

Concerning the criminal act of domestic violence, one-third of the respondents think that alternative sanctions should be imposed for this criminal offense. We see that there is still a considerable percentage of citizens who do not understand the seriousness of domestic violence. And the Criminal Code clearly prescribes that a person accused of criminal offense against marriage and family, who lives with the victim in the same family household or family community cannot be sentenced to house arrest. Thus, our legislative framework goes ahead of the existing awareness of the magnitude of the problem and the need to prevent it through the most severe sanctions,’ added Milas.

Three-quarters of the respondents stated that the house arrest does not have the same effect on the sentenced person, as well as the enforcement of prison term in institutional conditions. Also, almost two-thirds of citizens consider that some of the offenders should be accepted, a one-quarter claimed that they should be accepted regardless of the type of criminal offence, and 13% that they should not be accepted under no circumstances.

’In the part of the actors involved in the prevention of criminal offenses, almost 30% of citizens, as the first answer that comes to their mind, outline the family. When all the responses are taken into account, the perception of contribution of the police in the prevention of criminal offenses is growing, and it is perceived by almost half of the citizens,’ told Milas.

Milas stated that the data indicate ’the need for more proactive work on creating adequate normative and other conditions for the application of alternative sanctions and probation measures. These measures need to be applied as much as possible, of course, on the basis of the conducted risk assessment. Public awareness raising campaigns, as well as continuous education of all subjects involved in the probation process are necessary, in order to contribute to the full functionality of this system.’ 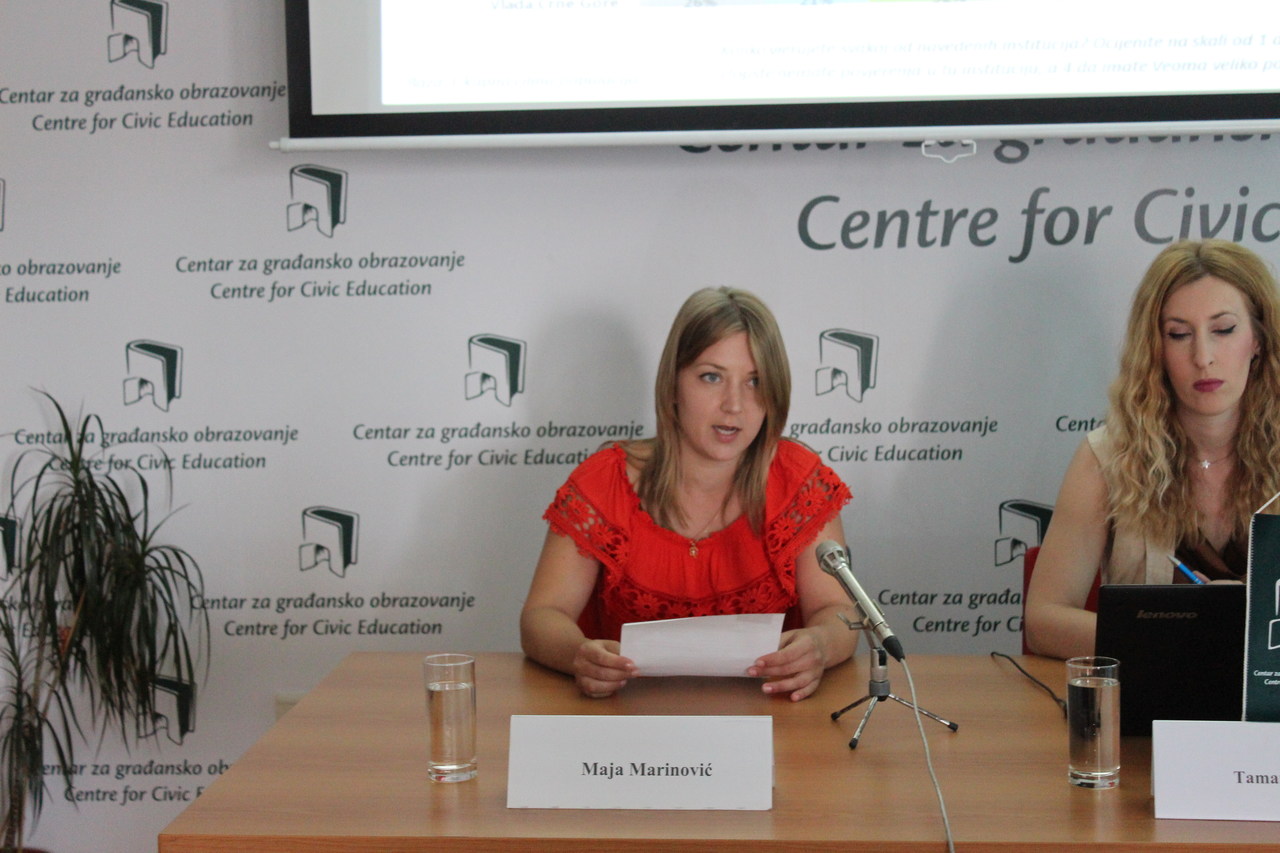 CCE was measuring also trust into the institutions and the data indicate that it is within the framework of already established trend. Maja Marinovic, project assistant, said that citizens of Montenegro have the highest level of trust in the education and healthcare system, as well as the military and the police. ’It is interesting, especially from the aspect of the unfavourable environment in which non-governmental organizations still operate, that the trust in them is huge – as much as 56%. We believe that this is the trust in those NGOs that are critically oriented, because they are the most recognizable in the public, they open up essential problems of citizens’ interest, although they are therefore often target of the authorities and their supporters in different spheres. That is why it is precious that citizens understand it more clearly,’ concluded Marinovic.

She also stated that ’on the other hand, we have a trend of a crisis of representative democracy, and in the line with our previous researches we note that almost three-fifths of citizens express distrust into political parties, and amongst key institutions the least trusted is Parliament of Montenegro. Also, the citizens of Montenegro express a little bit more trust in the Government than in the President of the state.’

Field research was conducted from 6 to 16 June 2019, on sample of 1,028 respondents in 17 cities in Montenegro. The expert part of the research for the needs of the project was performed by the agency Ipsos Strategic Marketing.

The research is part of the project ’Alternative sanctions – from punishment to reintegration’ implemented by the CCE in cooperation with the Institute for Legal Studies (IPLS), with the support of the Ministry of Justice of the Government of Montenegro. Its objective is to contribute to the improvement and protection of human and minority rights in Montenegro through the active participation of civil society organizations. More specifically, the project is aimed at strengthening the capacities of the competent authorities in order to improve the quality of respecting the fundamental rights of persons deprived of liberty in Montenegro and the cooperation of civil society organizations and competent authorities in valorising mechanisms of alternative sanction as an active contribution to respecting the fundamental rights of persons deprived of their liberty in Montenegro.