Everyone should appreciate his/her own particularity but should also appreciate the diversity of people with whom s/he shares the living space. The responsibility of the community is that the right of all is respected, because in such communities extremism cannot be born or exist if it emerges, as it was concluded at the fifth public debate ‘Dialogue in the community – prevention of radicalization and violent extremism’,  organized by the Centre for Civic Education (CCE) in Bijelo Polje. 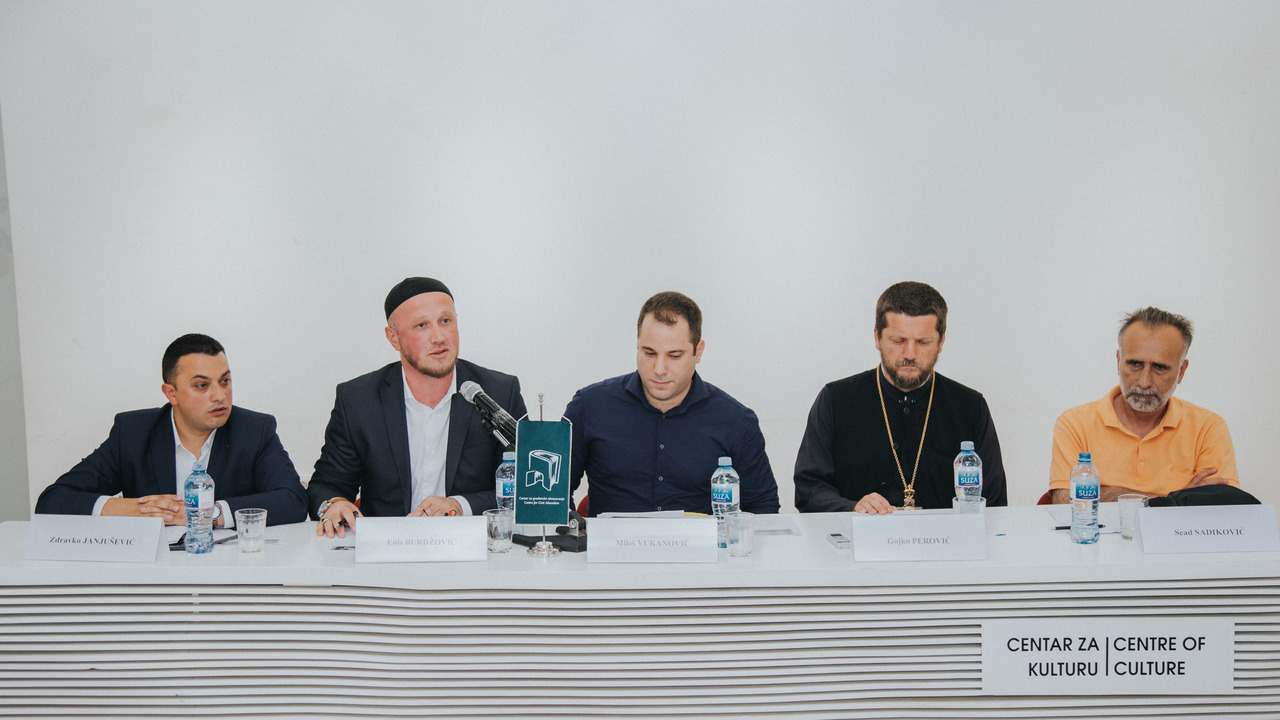 Miloš Vukanović, historian and CCE Programme Associate, explained that radicalization and violent extremism are global problem that has its expression at both the national and local level. According to him, this expression is also reflected in undermining of democratic trends of society, dialogue and human rights. ‘Education is a real barrier to the elements of extremism, as ignorance creates fears, and consequently fears lead to hatred’, Vukanović stressed. He pointed to the current problem of misunderstanding of important social subjects, such as Civic Education, Sociology, History, by the Ministry of Education. ‘Critical thinking, analysis, self-conclusion and creativity are competences that matter from an economic perspective in today’s labor market but are also important to allow us to conduct constructive discussion on such topics. We cannot agree with others in all, but when we have this knowledge, we can easily sit together and solve all problems through the dialogue’.

Enis Burdžović, Depputy Reis of the Islamic Community of Montenegro for media, emphasized the importance of preventive activities at the local or national level in relation to all that comes as a reflection of global events. He also stressed that religion grows in confidence, that only those who have trust can have faith, and that extremism and radicalism are created when distrust reaches its zenith. ‘Extremism can be attributed to any religion, but in any case, religion must not be accused of motivating extremism. If someone has taken the sacred text for the motive, then we must not blame the sacred text, but the wrong interpretation and understanding of the sacred text. Radicalism and extremism are signs of weakness, because the strong ones are convinced of the power of what they believe in, in noble advice that does not want anything bad to invite’, said Burdžović categorically. He cited an example of superficiality in condemning and prejudging guilt and motives of the recent attack in New Zealand. ‘Everyone has the right to live in his four walls in manner s/he wants, but not to impose his radicalism and approach on others’, Burdžović emphasized. He compared those who spread radical ideas with people who would burn the space they live in, thus getting the sensation, but also losing the place where they can sit, lean on. ‘The one who wants to radicalize religion, loses the comfort that faith offers to man’, he concluded.

Gojko Perović, Rector of Cetinje seminary, reminded that the three monotheistic religions (Christianity, Islam and Judeism) represent the religions of one book, that the testimony of the one religion can refer to the same personalities, and that Ibrahim, Abraham and Avram are the same man who was the first and scholarly example of extremism. He emphasized that it is impossible to imagine any religion without extremism. ‘I have never had a problem with a single believer – was he a Muslim, a Jew, or a Catholic, a man who is a believer. It may be even good, perhaps, that everything is from one book, from one man, was he Avram or Ibrahim, Suleiman or Solomon, either to say, ‘Amen’ or ‘Amin’. The differences that exist are the result of civilization, linguistic and other heritage and lead to the question of why then the religions, which go so closely to each other, emphasize differences and create conflicts’. He explained that, in one domain, it is good thing that there is a mosque and a church. ‘If I take the icon of Jesus Christ and go with it into the mosque, it would be disrespect of the mosque because there is no icon there, as it would be rude for a Muslim to seek the removal of the icon from the church. Hence, our dedication to God must have boundaries. That is why there is also a mosque and a church. We will not pray together because that is forbidden by the canons, but we must protect all people from all attacks regardless of religion’, concluded Perović. 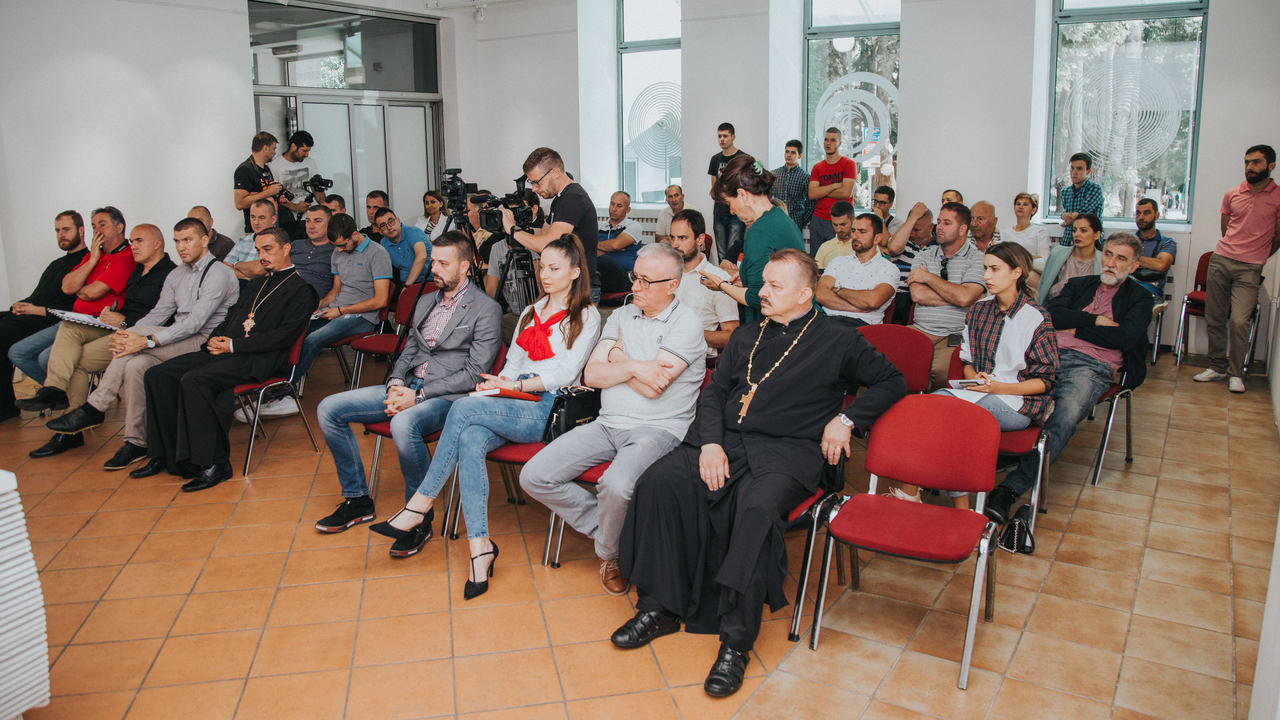 Journalist Sead Sadiković thinks that extremism is direct consequence of extremists, but also that all are guilty for extremism besides extremists. ‘They are victims with the idea of ​​dividing Muslims with Muslims, Orthodox with Orthodox. When we are their victims, this is also consequence of our actions in a society we call democracy. It is a bad system of governance, but certainly the best of these worse systems ‘. He considers that a democracy that represents the will of the people, and also the average, cannot make the decision better than the smart people. ‘The role of religion is missionary, to gather as much people as possible. But the role of the authorities is also missionary, to gather as many voters as possible. There comes the key line – the authorities manipulate with religious communities’. Sadiković pointed out that there is political, national, religious extremism and that they are very often intertwined. ‘Extremism will remain as much the government wants it because the intellectual elites and spiritual leaders are not able to take the lead in leading society, to impose to the authorities to make the right decisions. Then the authorities manipulate them and put in their ranks the extremists they control’, Sadiković concluded.

Zdravko Janjušević, Executive Director of the NGO ‘Democratic Centre of Bijelo Polje’, emphasized that civil society can not oppose extremism and radicalization all alone, but this requires the involvement of various segments of society, especially institutions. ‘Civil society in Montenegro at the local level has not been sufficiently developed, and just a small number of organizations is ready to act preventively when they identify hate speech, discrimination on various grounds, denial of civil rights and freedom to anyone, because those are the factors that can lead certain categories to extremism and the use of violence’, he said. Janjušević also emphasized the importance of media literacy, civic education, the development of solidarity and dialogue as a manner of recognizing and preventing radical organizations and ideologies calling for violence. ‘Systemic prevention of this issue actually starts from home and in the local community, continues through the education system, through a culture of living within safe environment, under appropriate economic conditions, in a system of functional health and social protection system’,  Janjušević said.

The public debate in Bijelo Polje gathered around 50 professors of history and sociology, councilors of Parliament of Bijelo Polje, representatives of non-governmental sector, political parties, employees in the municipality and others. It was organized within the framework of two projects Safe Net and Education for Multiculturalism and Interculturalism, supported by the US Embassy through the Fund for Active Citizenship (fAKT) and the Ministry of Human and Minority Rights of the Government of Montenegro.