On the occasion of 24 years since the Srebrenica Genocide, the Centre for Civic Education (CCE) and the Human Rights Action (HRA) are reminding of this terrible crime and point out that facing with that crime and support that the Federal Government of Yugoslavia (Serbia and Montenegro) gave to the Bosnian Serb army that has committed it must become part of Montenegro’s national policy and compulsory culture of remembrance, in order to ensure justice for victims and to prevent recurrence of crimes. 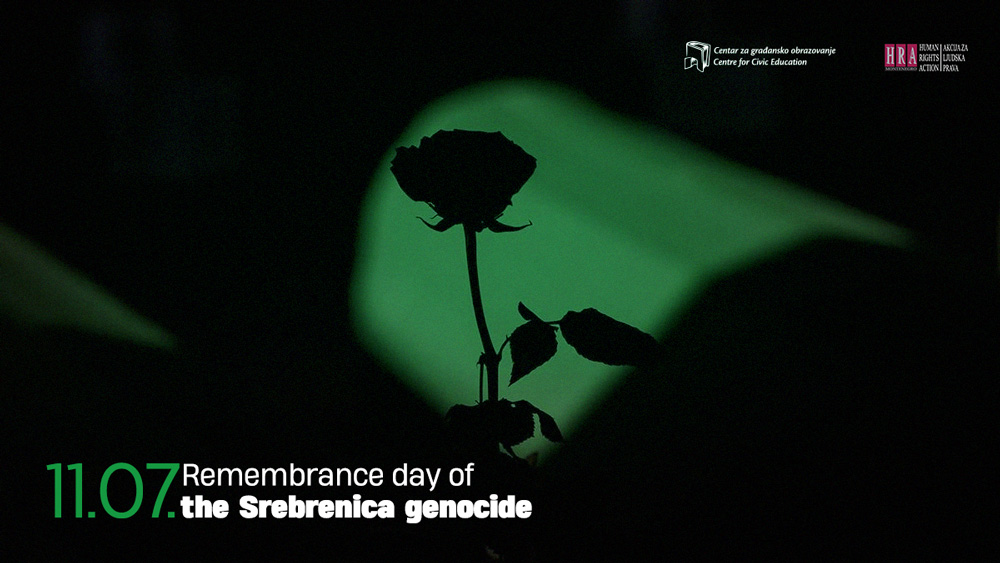 The Srebrenica Genocide represents the most massive crime committed on the soil of Europe after the Second World War. Between 11 and 19 July 1995, members of the Bosnian Serb army systematically killed at least 7,800 unarmed Bosniaks aged 14 to 70 years. These crimes were the subject of nine trials before the International Criminal Tribunal for the former Yugoslavia (ICTY). It was determined that members of the Bosniak Serb army under the command of Ratko Mladić and Radovan Karadžić committed genocide in Srebrenica, and that the Federal Republic of Yugoslavia supported the Bosniak Serb army. In 2007, the International Court of Justice found that Serbia was responsible for the fact that the Federal Republic of Yugoslavia – Serbia and Montenegro – did not prevent this genocide. Although Bosnia and Herzegovina filed a lawsuit against Montenegro also before the International Court of Justice for violating the Convention on the Prevention and Punishment of the Crime of Genocide, Serbia remained the only one in the dispute for formal and legal reasons, assuming the state continuity of the former FRY. The Dutch Court Appellate Council established in 2017 that the Netherlands was also responsible for the death of 300 Bosniaks who were killed in Srebrenica within the UN protected zone at the UN base in Potocari because its soldiers within the UN did not prevent these people from being killed.

It is particularly concerning the fact that after two and a half decades of the crime in Srebrenica there is a heroization of convicted war criminals by representatives of institutions and parts of society within certain countries in the region. At the same time, initiatives that come from civil society, which are focused on justice and genuine reconciliation, are being minimized. The consequence of such an approach is the inadequate confrontation with the war past, which makes it possible for the same leaders to still have the leading roles in the states as in the war time. Precisely because of the dominance of particular interests of powerful individuals at the expense of justice and dealing with the past, the events of the nineties are still heavily burdening the region. The last EC Strategy for the Western Balkans emphasizes the importance of reconciliation and regional cooperation, while the leaders of the Western Balkans are reluctant to approach this topic.

We remind that the Parliament of Montenegro in 2009 adopted the Declaration on the Adoption of the Resolution of the European Parliament (EP) on Srebrenica, condemning this crime, and committed itself to affirmation of truth and contribution to justice, as well as to development of culture of remembrance as mechanism for dealing with war past. However,in practice, the effects of these goals are still not visiblesince the competent state prosecution did not produce track record in investigating possible criminal responsibility of Montenegrin citizens in relation to the Srebrenica crime, and in cooperation with the prosecutor’s office of Bosnia and Herzegovina, for what they committed to. In addition, the Ministry of Education has not yet created curricula to ensure that pupils and students are informed about this crime and its consequences. This is confirmed by the analysis of history textbooks and curricula conducted by the CCE “Montenegrin textbooks – what do they conceal about the contemporary history of Montenegro?“, from which one can be se that there is not a single sentence in Montenegrin textbooks about the genocide in Srebrenica. Also, the Government does not commemorate the Srebrenica Memorial Day as a separate memorial, but rather uses the opportunity to mark the remembrance of all crimes committed on the territory of Montenegro and the regions committed on behalf of Montenegro on 11 july, and thus relativizes all the crimes.

The CCE and the HRA appeal for the sincere steps to deal with the past are taken instead of formally proclaiming support for transitional justice. This is necessary in order to promote democratic values ​​in Montenegro and to ensure lasting peaceful relations with neighbours.