‘People with disabilities can be creators of great and important stories if given the opportunity, they should be accepted individually, according to their personal qualities and willingness to face workplace challenges,’ as it was assessed at the conference ‘Perspectives of employment of persons with disabilities in Montenegro and Examples of Good Practice’ which was final activity of the project ‘Developing skills for better employability of persons with disabilities’, organized by the Centre for Civic Education (CCE) and supported by the Employment Agency of Montenegro.

Daliborka Uljarevic, CCE Executive Director, emphasized that persons with disabilities remain at the top of the discrimination scale in the Montenegrin society, which is why much work is necessary to make our society tolerant and inclusive. ‘Unemployment is both the cause and the consequence of any further discrimination and marginalization of persons with disabilities, which consequently harms both this group and society as a whole, due to the fact that huge potentials remain unused as a lever for social and economic development,’ assessed Uljarevic. In her reflection to the project goals, she especially thanked to the organizations, institutions and companies that demonstrated openness to cooperate and in which the project beneficiaries had their working practice – NGO CAZAS, NGO Green Home, Paraplegic Association from Niksic, Centre for Investigative Journalism of Montenegro, Arhimed LLC, ‘Moja knjiga’ LCC, New Page LCC, Agency for Personal Data Protection and Free Access to Information and Institution of Protector of Human Rights and Freedoms of Montenegro. ‘We thank them for providing an example of good employment practice of persons with disabilities, hoping that many other employers will follow this example and thus contribute to the inclusion of persons with disabilities in Montenegrin society,’ Uljarevic concluded. 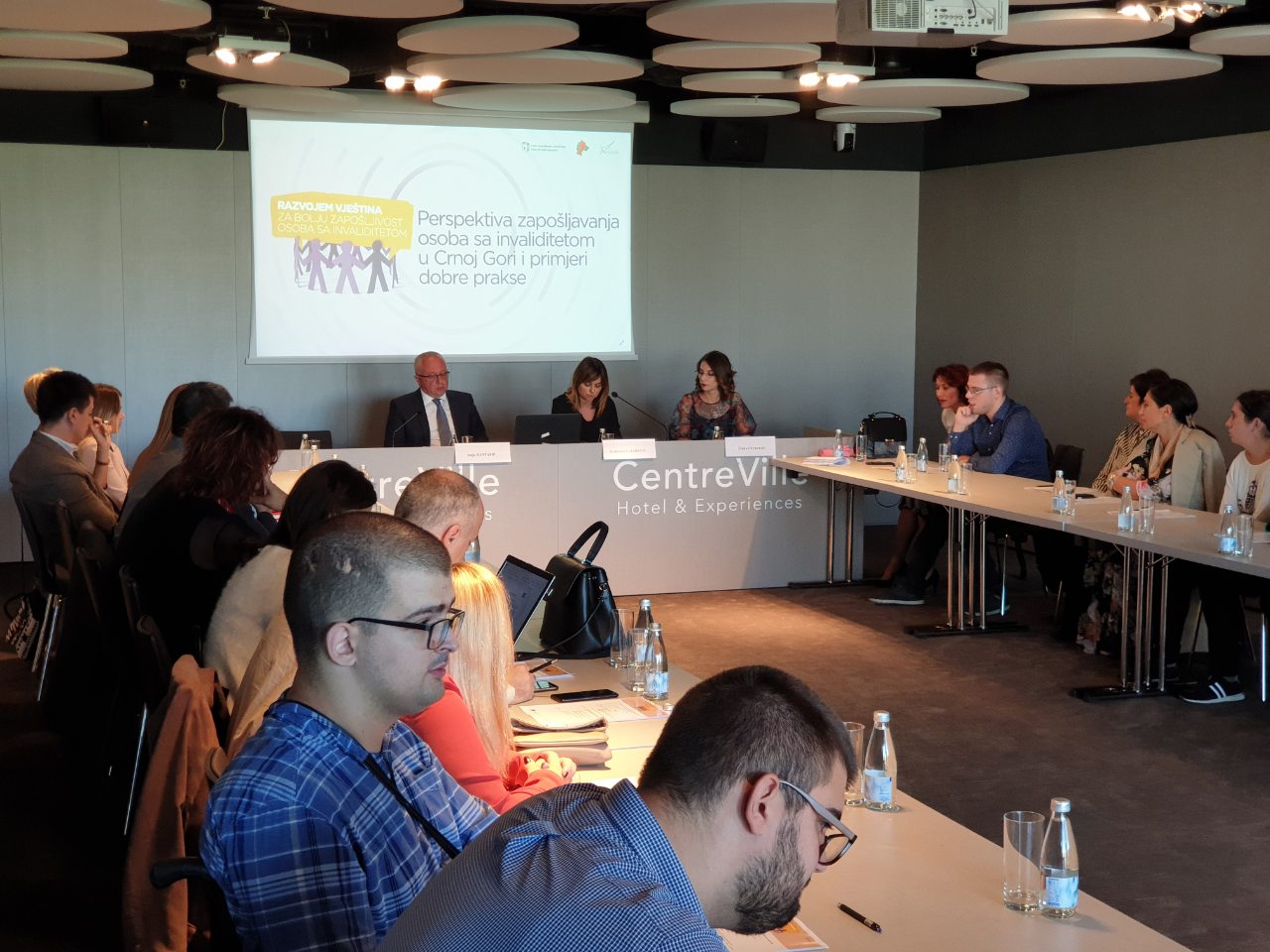 Dejana Ponos, Director of Arhimed LLC, spoke about examples of good employment practices and shared Arhimed’s experience in hiring people with disabilities. ‘We had good will when applying and we were open for learning, which has proven to be crucial to achieve success in this kind of cooperation, both in our company and with persons with disabilities themselves.’ She explained that it was process, which was conducted through gradual inclusion of persons with disabilities – from several hours to full-time work. In parallel, they learned IT skills, company culture and habits of employees with disabilities, on one hand, while the time spent together and jokes were additional motivation for good cooperation, on the other. ‘Everyone benefited from this project – both employees with disabilities who developed social and work skills as well as other employees because they learned patience, accepting diversity in every way, empathy, adapting, which was also shown by a survey among Arhimed employees,’ she stated. She further explained that the goal of every company is to find loyal and hard-working people, and that inclusion of persons with disabilities into society and work tasks, not only in the projects, must become a goal. ‘Duty of all employers is to find the adequate job for the right person whom we will not qualify as disabled person but as an equal member of the team,’ she concluded. 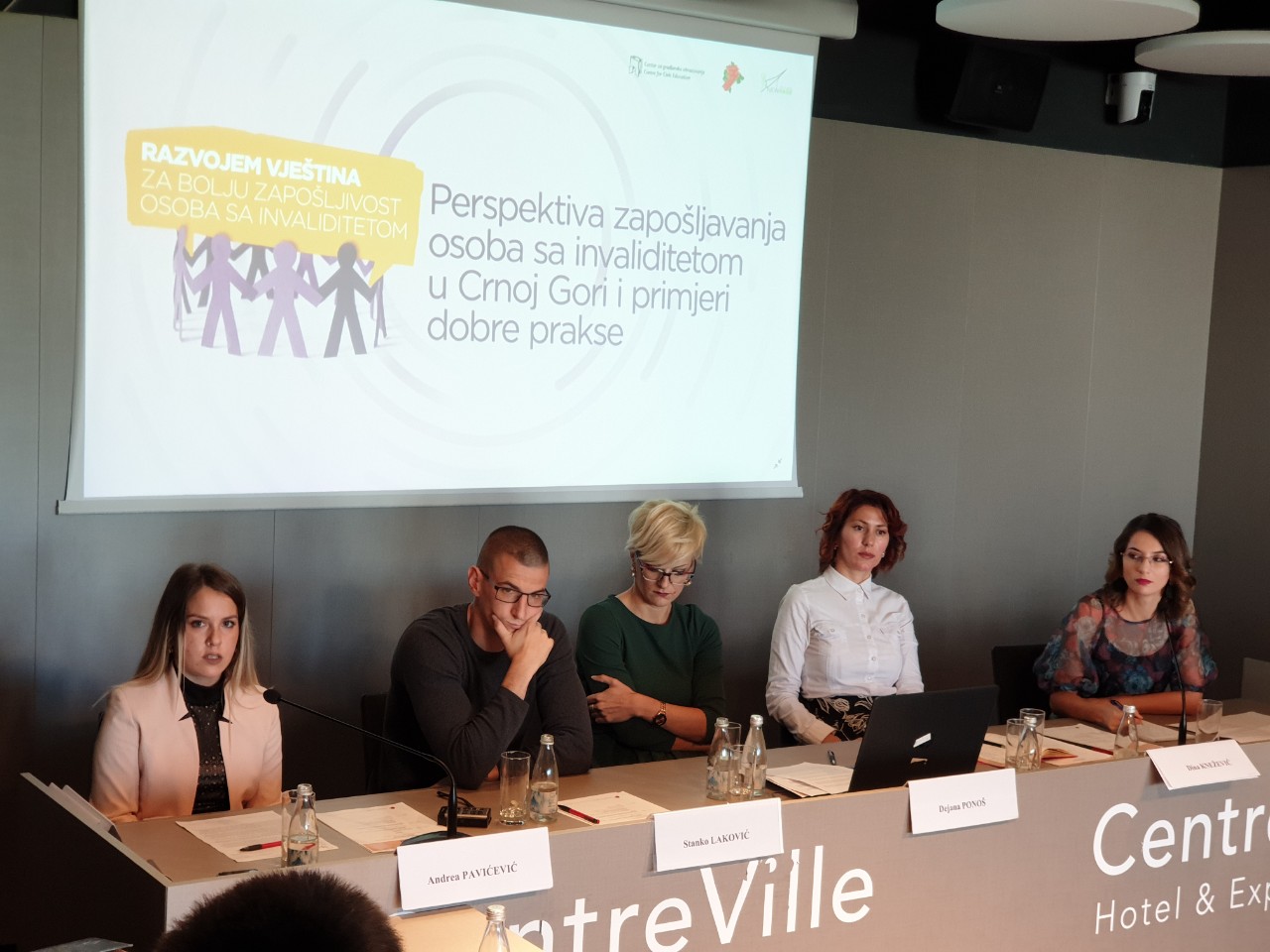 Andrea Pavicevic, the project beneficiary, talked about her experience through the CCE project and capacity building within organized intensive two-month training. ‘Acquired knowledge was very useful and I apply it in my new workplace. I think this project was challenging for both employers and project beneficiaries. In Montenegro, awareness of the rights of persons with disabilities is still undeveloped, despite the fact that they can be, in accordance with their capabilities, i.e. the type of disability, useful workforce and that they can leave their mark on different processes,’ Rogosic said. She emphasized that much depends on the attitude towards persons with disabilities, bearing in mind that they constantly face misunderstanding, discrimination and disrespect, which also stimulates employers’ scepticism about the abilities of persons with disabilities to carry out work tasks. ‘In order to reach a common goal, it is essential that persons with disabilities enjoy their fundamental rights and freedoms, and for employers to be open to cooperation. People with disabilities can be creators of great and important stories if given the opportunity, they should be accepted individually, according to their personal qualities and willingness to face workplace challenges’, she concluded.

The conference gathered together around 45 participants – persons with disabilities, representatives of employers’ associations, unions, non-governmental organizations and Government, who after the opening remarks had an interesting discussion.