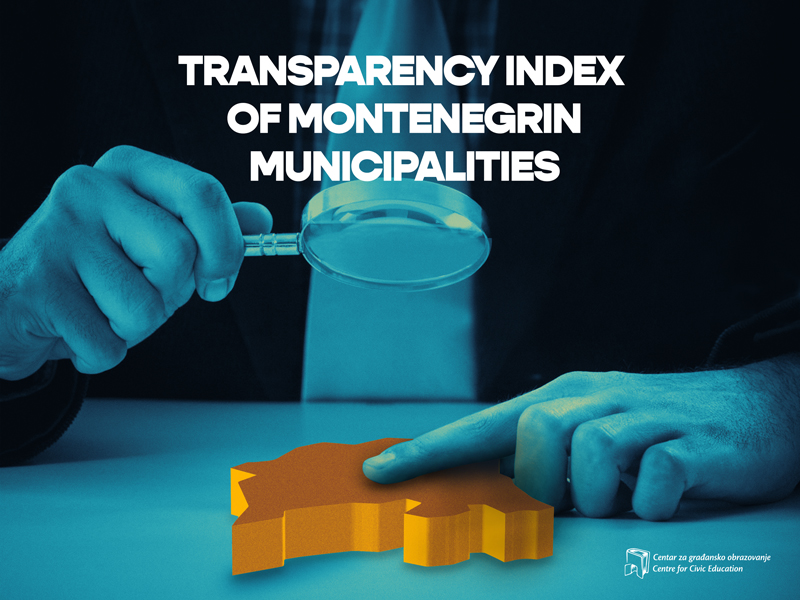 For the purposes of the research, the CCE team conducted an extensive insight into official Internet presentations of all municipalities, in accordance with developed methodological framework based on the availability of information and documents of public importance. This insight was performed during January and February 2020, with note that several items were additionally checked during March 2020. Therefore, the Transparency Index of Montenegrin Municipalities for 2019 includes data that were on the websites of municipalities up to this specified period in which the researchers checked the availability of documents/information, which means that deviations are possible if the information/documents were posted later or the sites of municipalities were changing.

However, this situation is also a step forward for some municipalities compared to the previous municipal transparency surveys conducted by the CCE, although these were not as detailed and systematic as Transparency index of Montenegrin municipalities. In addition, the sites are visually more interesting and clear than before, which makes the more user friendly. Also, on most sites, certain issues of public interest are highlighted. These categories in the form of separate banners are located in the middle or on the side and include budget, public procurement, documents, free access to information, public institutions, etc. However, key deficiencies are identified in the content, i.e. lack of numerous information and documents, which caused difficulties for citizens to get information about the situation in the municipality and its long-term plans.

The relation of regional cross-section and transparency indicates that the south leads with a cumulative average score of 43.40, followed by the central part with 41.16 and the north with 38.42 points.

Size and population of the municipalities do not have specific impact on the transparency level.

The issue of transparency of municipalities is, although underestimated, very important for the effective suppression of corruption, but also for monitoring of public policies at the local level and improvement of the services that municipalities provide to citizens. There is a number of information/documents that none of municipalities have on its websites. For example, there is no data or reports for any municipality on how councilors voted by name during 2019, what are the hours for reception of the citizens to mayor’s office, how much money they allocated to media in 2019 or how integrity and local anti-corruption plans are implemented during 2019.

Such practices must change so that citizens, as well as other stakeholders, could have easily accessible and full information about the work of municipalities. Also, this prevents any misinterpretation or misunderstanding as a vacuum, in which there is no official information, can create problems for all parties, but also result in distrust in the system of local self-government.

This report was created as part of the Let’s Put Corruption into Museum project, implemented by the Centre for Civic Education (CCE) in partnership with non-governmental organizations CeMI from Podgorica, Bonum from Pljevlja, UL-Info from Ulcinj and Za Druga from Petrovac, in cooperation with the Ministry of Public Administration and the Agency for Prevention of Corruption, with financial support of the EU Delegation to Montenegro and co-financing from the Ministry of Public Administration.