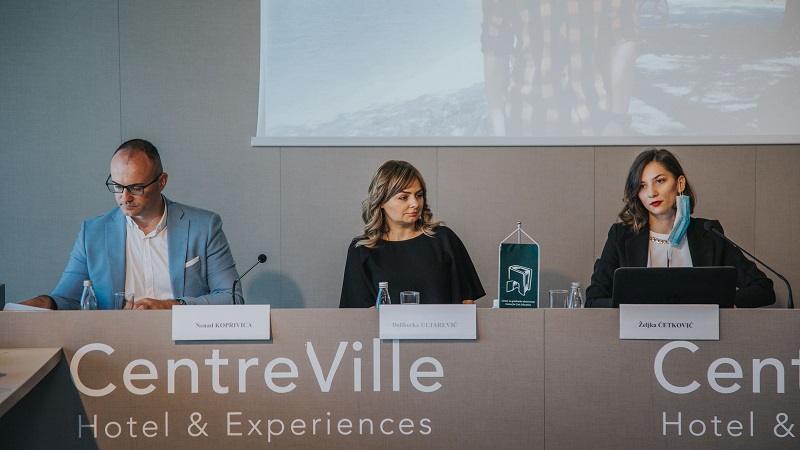 Nenad Koprivica, Director General of the Directorate for Youth in the Ministry of Sports and Youth, pointed out that the issue of youth is multi-sectoral in the Government of Montenegro. “However, a special responsibility also lies with young people who should be subjects and not objects of youth policy, that is to actively participate in policies that are created for young people. For example, 25 high school students who passed the Youth Activism School of the CCE are quality young people who believe in activism, as well as that their work and engagement can contribute to social change” said Koprivica. He pointed out that the Ministry maintains a continuous dialogue with young people through its numerous activities or in partnership with young people and partners from youth organizations. He pointed out that a modern institutional and normative framework that responds to the needs of young people contributes to good communication and improving the position of young people. Koprivica pointed out that today young people have many more opportunities than previous generations and that it is up to them to use that and to participate in all processes. He particularly referred to the new Law on Youth. „That law brought a lot of innovations and linked different levels. For example, we have strengthened the responsibility of local self-governments, we introduced the obligation of adoption of local action plans for young people, and now we have adopted local action plans in 2/3 of municipalities“, said Koprivica. He also pointed out the progress in institutionalizing youth services available to young people for non-formal education and other activities. „In the period since the adoption of the Law, the reconstruction of six youth services in the north of Montenegro has been completed and that refers to the municipalities where we never had the youth services (Plav, Petnjica, Mojkovac, Nikšić, Šavnik, Danilovgrad) as well as a reconstruction of the Youth Centre in Podgorica that successfully works for already two years“, stated Koprivica.

Daliborka Uljarevic, Executive director of the CCE, stated that young people, as well as other social categories, are not unambiguous but that they are characterized by stratification. „Our research from 2016 indicated that participation in civic initiatives is at the bottom of the list of important things for young people, as at that time almost a quarter of respondents thought that it was not important to be involved in civic initiatives, i.e. actions, while a convincing majority felt it was not important to be active in politics. Frankly, it is not that young people had a lot of incentives for different attitudes. However, my impression is that this has changed in the last four years and that we are witnessing some new interests when it comes to the attitude of young people towards activism“, assessed Uljarević. She emphasized the importance of the educational process in promoting the value framework and shaping young people, as well as other actors. „A special problem we have is related to the so-called brain drain. In that part, the Government should finally start creatinga a database of young people who are currently in the process of studying outside Montenegro, as well as those who have completed their studies at prestigious universities and assess this problem. Also, we have proposed to the Government that already the Budget for 2021 allocates funds for scholarships for young people who manage to enroll in prestigious universities (undergraduate, master’s and doctoral studies) with specifying their obligation to have their professional engagement in Montenegro for some time after graduation as we should not lose such resources“, she said. 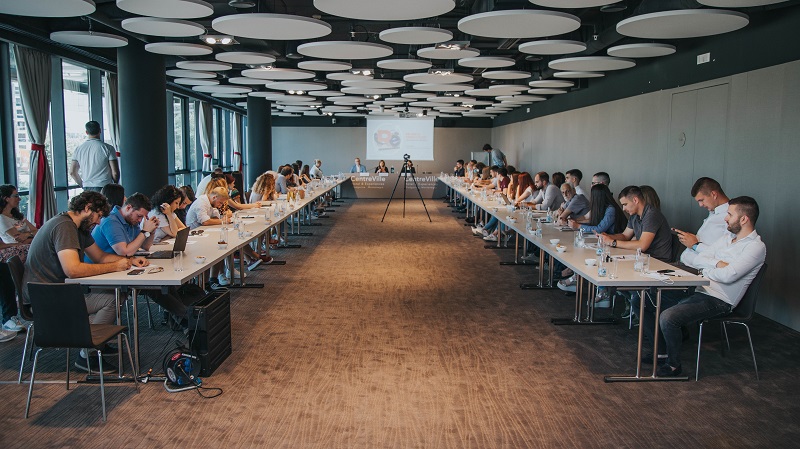 Prof. Biljana Maslovarić, PhD, Executive director of the Pedagogical Center, emphasized the sensitivity of the youth category due to the so-called double transitions – psychological, which refers to the transition from childhood to adulthood and social, which represents life in a democratic society. She elaborated that the process of identity formation in adolescence is the strongest and that „the growth of cognitive abilities in adolescence and the need to integrate it into a coherent whole, produce an identity crisis that arises due to society’s demands that young people finish school, get into the labour market, find a partner, choose a political philosophy, religious practice, etc. This identity crisis period is happening almost in parallel with the social transition through youth participation, social engagement, activism, solving their important issues, and making decisions on a local and the national level“. Maslovarić also explained that not every participation is equally valuable, pointing out that “we have manipulations, decorations and the illusion of participation, i.e. quasi-participation”, and that “the level of information is very important, the level of consultation, division of power and redistribution of power in society to measure meaningful participation”, emphasizing diverse positions of young people in shaping decisions within the community, policy-making and implementation. “The education system has the real power inthe  systemic introduction of participation and until the critical discourse in the education system becomes a regular practice, we will not have adequate activism and participation of young people nor will they be the ones we truly listen to,” said Maslovarić. Maslovarić sees the key culprit of the lack of youth activism in adults who have failed to position themselves as good value models.

Neđeljko Đurović, a professor at the High School of Economics and Hospitality in Bar, believes that youth activism should be encouraged through the formal education system and especially during the final grades of primary schools, high school extracurricular and leisure activities and through measures to encourage student activism, but also through planning non-formal education in cooperation civil society with the institutions of the education system. “Bodies of state administration and local self-government, cultural institutions, and sports associations should have planned ways and designed methods, i.e contents intended to encourage activism amongst young people and their inclusion in decision-making processes and participation in community life and public events,” Đurović added. He recommended that volunteerism and getting business skills to be popularized among young people, and that work and life experience should be taken into account by employers when choosing candidates for a job. Đurović expressed concern over the demotivation of young people to get involved in community work, growth of peer violence, but also brain drain. “The state should deal more with young people and prove to them that they have a serious perspective here. Also, the existing institutional framework should be more open and flexible when it comes to youth activism, with local governments playing a key role in including young people and pointing out that their voice is valued and their knowledge is recognized” Đurović suggested. 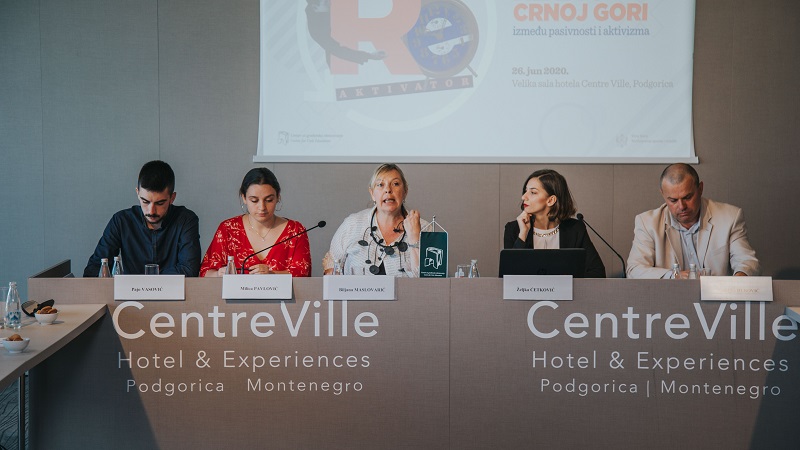 Pajo Vasović, a high school student from the First Vocational School in Nikšić, believes that the concept of youth activism has not been presented to young people in the right manner, which is why the lack of understanding or lack of interest of young people in this type of engagement cannot be condemned. “We are rarely presented with opportunities that we can achieve through youth activism. Montenegro needs academic and active citizens, ready to accept the burden of what awaits us and who will not stand in the past, but will have the breadth to accept differences and mobilize others to change the world around them” said Pajo Vasović. He pointed out that, in the past few years, the position of young people has significantly improved and that it is finally given importance to young people, especially since the adoption of the Youth Law from 2018. „However, I resent the fact that those who make decisions still do not hear enough the voice of young people“, he assessed.

Milica Pavlovic, a high school student from the High School of Economics and Catering in Bar, proved by her example that it is possible to be an excellent student and an active young person. „The support I receive for activism is mixed. It is strong in the family and amongst friends and that means a lot to me, but it lacks in school and from those who educate us and from whom it would be expected that they would encourage us more than anyone else to be active“, stated Milica Pavlović. She cites xenophobia and laziness as the most common reasons for the passivity and apathy of young people, but also the fear of getting out of the comfort zone. “The majority simply do not want anyone to look at them with ‘other eyes’, which is why they choose to do what everyone else does – and that is to keep quiet and not expand their horizons. I would like to see more young people get involved in various activities and build themselves as individuals and thus their community,” she concluded. 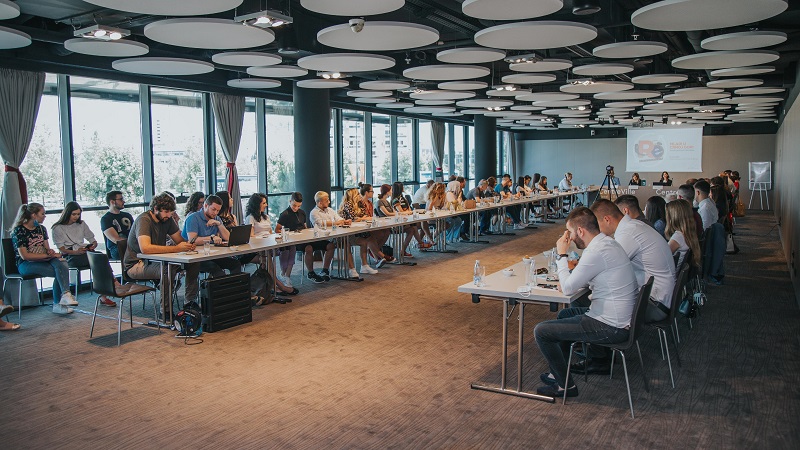 The conference, which brought together nearly 60 participants from youth NGOs, informal youth groups, educational institutions and political parties youth, was moderated by Željka Ćetković, Programme Coordinator of the Active Citizenship at the CCE. Two video vignettes were also presented at the conference with messages from young activists. The conference was organized within the project (Re)activator!, implemented by the CCE with the support of the Ministry of Sports and Youth of Montenegro.