The Centre for Civic Education (CCE) and the Friedrich Ebert Stiftung (FES) have presented today the findings of public opinion research on the attitudes of Montenegrin citizens towards several socio-political issues that shape their needs and choices, as well as the attitude towards the election offer.

Miloš Vukanović, an advisor in the CCE, said that, according to the research, 42% of citizens consider that Montenegro is going in the wrong direction, while slightly more than a third estimate that the country is going in the right direction. „When this is reduced to the personal level, i.e. the degree of life satisfaction, measured on a scale from 1 to 10, the average is 5.66, i.e. we are on the border between satisfaction and dissatisfaction with life in Montenegro“, concluded he.

“When it comes to trust into institutions, the greatest trust is towards health and education system, followed by church and army. On the other hand, the least trust is given to political parties, the Parliament and trade-unions. Non-governmental organisations are ranked very high, and they are far above some key institutions, which indicates the crisis of representative democracy and the legitimacy of the institutions themselves”, Vukanović assessed.

A vast majority of citizens assess the current atmosphere in Montenegrin society as politically tense, while nearly half of citizens believe that fatigue and lethargy currently prevail. Only a little more than a one-third estimate that there is plenty of optimism, i.e. enthusiasm.

“Political parties have their topics that they insist on, while we were interested in what citizens estimate as important topics for parliamentary elections and they essentially refer to a set of socio-economic issues, i.e. unemployment, improvement of life standard and fight against corruption and organized crime”, said Vukanović, explaining that “health-care is expectedly prioritized, while many stakeholders will probably be surprised by the relatively low positioning of the Law on Freedom of Religion and the identity issues, given that these issues have been dominant in public discourse in the first half of the year”. He assessed as positive that issues of the position and prospects of youth, education and European integration are crystallized as important. “It is unequivocal that citizens’ life issues and concern for the quality of life are imperative, thus it is to be expected from political parties to formulate election campaigns according to these parameters”, recommended he.

Daliborka Uljarević, Executive Director of the CCE, stated that research findings indicate that one-fifth of citizens consider that Montenegro is entirely a democratic country and slightly more than a third estimate that it is partially democratic, while there is one-third of those who state that Montenegro is not a democratic country, and collectively, everyone evaluates the so far work of the Government with an average mark of 2.54 on a scale from 1 to 5. 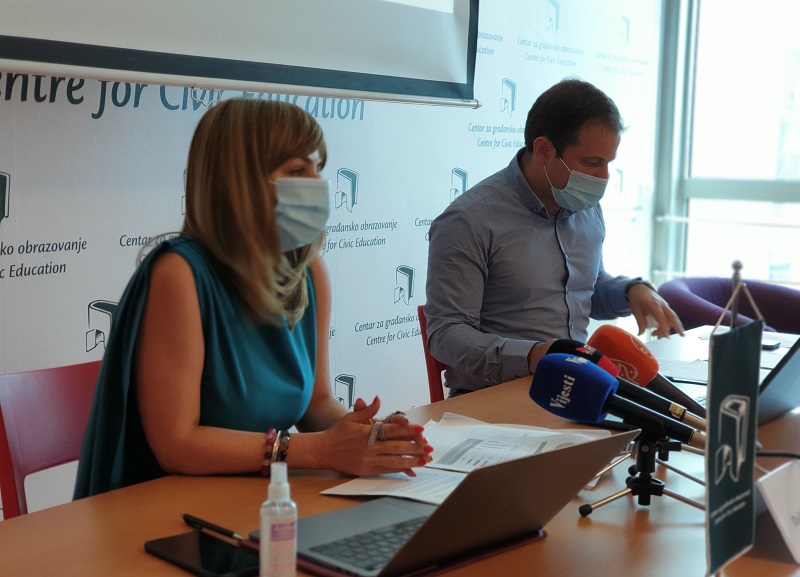 „It is interesting that the perception of preferable leaders is changing. For years, we have had underlined idolatry reflected in the widespread attitude that the head of state should be a firm and unwavering leader whom the people will follow. Nowadays, it is more appreciated the profile of leaders who are ready for dialogue and compromise, as well as of those who will strengthen institutions. Only every fourth respondent estimates that Montenegro needs a leader with a strong hand, whereas this is most pronounced amongst the supporters of the DPS, but even their electoral body is divided therein, i.e, in total, there is more than half percentage of those whose first choice is no longer the leader of a strong hand“, Uljarević said.

When it comes to the assessment of the conditions for democratic organisation of elections and the legitimacy of elections, odds are in favour of those who think that certain conditions exist and that the elections are to some extent fair and just, but a large percentage remains decisive that Montenegro does not have fair and just elections (41.7%). Those who think that the elections are not fair and just, state the following main obstacles: abuse of state resources by the authorities, unregulated polling lists, poor election legislation, followed by distrust in key institutions tasked with conduct of elections (State Electoral Commission, Agency for Prevention of Corruption, Prosecution) and inadequate control over political campaigns funding.

More than half of the citizens estimate that voting in the elections in Montenegro is secret. The opposite view has 28%, while almost every fifth respondent cannot assess this.

“Also, there is a large number (62.8%) of those who believe that votes are to some extent being bought at the elections. They perceive all actors of the election process (political parties, institutions and citizens themselves) as the most responsible for this phenomenon, and in the individual assessment they see as responsible political parties and those ready to sell their vote”, Uljarević pointed out.

“Every tenth citizen fully trusts political parties, while around 40% partially trust them, or do not trust them at all. The degree of keeping promises by the political parties, measured on a scale of 1 to 5, amounts to 2.99. This means that the political parties, which the respondents voted for, have, in their opinion, only partially fulfilled their pre-election promises. However, this does not always change their views on these parties because they significantly state that they would vote for the same party again. This also becomes clearer when one considers the determining reasons for voting for a party. Namely, in addition to the expected one-third of those who vote because of the programme and ideological compatibility, it is not a small number of those who are determined by the party leader and the lack of a better alternative. For now, based on these empirical data, it is not possible to see the problem in turnout, but this is difficult to predict it until the elections themselves also due to the complexity of the epidemiological situation”, Uljarević assessed.

Citizens of Montenegro predominantly see themselves as leftists (nearly half of them), while almost every fourth respondent positions their political orientation at the centre. A quarter could not determine themselves concerning this issue, and only 6.6% of citizens opted for the right.

“In assessing the ideological orientations of political parties, with the note that we did not include national minorities parties therein, citizens most often cite the DF as the right. It is interesting that, according to the citizens’ perception, DPS and SD are next on the list as right-wing parties. URA, Democrats and SDP are identified as the most recognizable political subjects of the left spectrum of political activity. It is clear that some of these perceptions do not correspond to what those parties are publicly advocating for, and it is up to the parties to assess what they are doing so that citizens are seeing them differently than they present themselves”, Vukanović stated.

The findings indicate that the current values of our society are shaped by liberal-leftist views and support for civic society with the presence of certain conservative elements, such as respect for authority and traditionalism. Certain discriminatory conservative perceptions of the LGBT population and women are lowly, but still, present.

“Citizens in majority want to live in a society where respect for the law and not an emphasis on political and national symbols is an expression of patriotism. Besides, it seems that, despite everything, the civic concept has been consolidated in the Montenegrin society, but also that Montenegrin authorities still need to work on securing it. Half of the respondents think that for the sake of the state interest, national and religious affiliation should be put aside”, Vukanović pointed out.

“It is encouraging that almost half of the respondents fully believe that citizens can influence the changes in society, while a third believe that this is partially possible, and only 5.3% think that citizens do not have the power to influence changes in society. However, this is still not reflected in social and political activism, because both are below average, with the indication that citizens are more willing to express their activism outside of political parties”, elaborated Daliborka Uljarević. 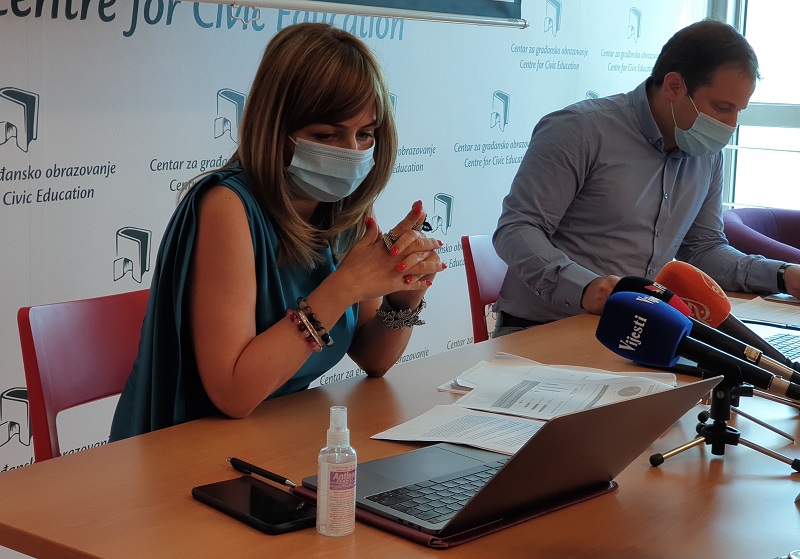 The research indicated that almost one in four respondents stated that they were a member of a political party, and more than third (37.2%) that they were members of NGO or informal group.

One part of the research also referred to the foreign policy, and in that respect, one-third of the citizens believe that Montenegro’s membership in NATO has not brought benefits to our country. More than two-thirds support EU membership. “This indicates that the relevant institutions have not adequately communicated the benefits of NATO membership, while the emphasized activity of the EU is reflected in greater support”, Miloš Vukanović explained.

The EU is seen as Montenegro’s most important foreign policy partner, followed by Russia and the USA. “Positioning of the USA behind Russia is obviously a consequence of the lower level of US engagement in Montenegro since Montenegro became a member of NATO alliance”, Vukanović stated.

The citizens of Montenegro estimate (in more than 50%) that Montenegro’s relations with all its neighbours, except Serbia, are very good and good, while the relation towards Serbia is an expected consequence of recent tense political events.

The research also included the attitude of citizens towards their future in Montenegro and showed that one-fifth of the respondents want, and also plan, to leave Montenegro, and amongst them young and educated people are in the lead. The main reason for leaving Montenegro is the improvement of living conditions. The most desirable country for resettlement is Germany, followed by the USA, other EU member states, the Nordic countries, etc.

“Imputing topics that are not crucial for the overall development and stability of the system and the country for the purpose of electoral engineering is not good, although this is a practice within the Montenegrin electoral conundrum. We hope that these findings will be useful to the election stakeholders in formulating election offers, because it seems that citizens are maturing and emancipating themselves faster than those who should lead them. Of course, this does not necessarily have to be directly reflected in these parliamentary elections, but responsible politicians should keep this in mind and think outside the scope of their projected result. This is additionally important because of the challenges that Montenegro is facing, to which only the Government that has the political legitimacy, credibility and professional capacity to present them can adequately respond”, Uljarević concluded.

Expert support in conducting the field research was provided by the Damar agency from 30 June to 5 July 2020, with application of the three-stage stratified sample, which included 10 municipalities in Montenegro. The total sample consisted of 707 adult respondents, with post-stratification by a number of indicators.

The research is part of the Democratic Forum project, which is implemented annually by the CCE and the FES on various topics and in various forms.