On the occasion of the 25th years from the Operation „Storm“, which lasted from 4 to 7 August 1995, the Centre for Civic Education (CCE) pays a tribute to the innocent victims of this crime and calls for stronger social engagement in the processes of dealing with the past and building remembrance cultures. 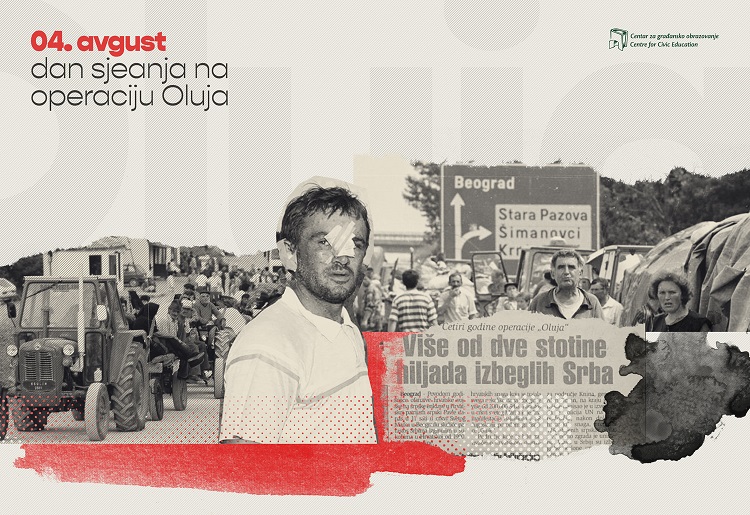 We remind that 25 years ago, with the attack on Knin, at dawn on 4 August 1995, the long-prepared exodus of Serbs from Krajina began. In the military-police operation “Storm”, conducted by the Croatian units, systematic crimes were committed against Serb civilians and their property. For a few days about 250,000 people were expelled, mainly to Bosnia and Herzegovina, Serbia and other countries of the former Yugoslavia, and thousands of houses and other buildings were burned, while even today, a large number of refugees are waiting to return to the areas from which they were expelled. According to data of the Croatian Helsinki Committee for Human Rights, by the end of 1995, about 400 Serbs who chose to stay in their homes were killed.

Operation „Storm“ is the largest and one of the most brutal ethnic cleansings in the territory of the former Yugoslavia in the conflicts of the 1990s, and at the same time, it is a crime for which none has been held accountable to date. The International Criminal Tribunal for the former Yugoslavia (ICTY) convicted in 2011 General Ante Gotovina (Commander of the Croatian Armed Forces Split and Chief Operational Commander of Operation Storm in the southern part of Krajina) to 24 years and General Mladen Markač (Commander of the Special Police of the Ministry of the Interior of the Republic of Croatia) to 18 years in prison. The verdict states that they, along with several Croatian officials, including then-President Franjo Tuđman, participated in a joint criminal action whose objective was permanent removal of the Serbian population from Krajina area by force, the spread of fear or threats of violence, persecution, forced relocation and deportation, confiscation and destruction of property or otherwise. Following an appeal, the ICTY acquitted Generals Gotovina and Markač in 2012. This verdict has caused a great deal of controversy as the ICTY Trial and Appeals Chamber – based on the same facts and the same right – have reached opposed conclusions on key issues disputed by the prosecution and the defense at trial. However, it is important to emphasize that these conclusions do not call into question the facts about what happened during and after Operation „Storm“.

It is particularly concerning that even after a quarter of a century, no victim of „Storm“ in Serbia today has the status of a civilian victim of the war. The reason for that is the fact that the competent state bodies do not recognize as victims of the war persons who died outside the territory of Serbia, although the legislative framework in Serbia did not explicitly prescribe that. The selective approach of the competent judicial institutions is also worrying, as they interpret legal solutions in almost the same situations in a different manner and thus practically further victimize victims.

The commemoration of the Day of Remembrance for the victims of Operation “Storm” is not only a commemoration of a large number of victims but also an opportunity to emphasize the obligation of everyone in society to strengthen those ideas that are directed against the hatred that led to this crime. Hence, we mark this day to defend the memory of the crime from the passage of time, oblivion and the accompanying processes of relativization and denial, but also to note that without punishment of crimes and facing the past there is no progress.