On the occasion of 23 August – European Day of Remembrance for Victims of All Totalitarian and Authoritarian Regimes of the 20th century, the Centre for Civic Education (CCE) uses the opportunity to express its support for victims and families of victims of totalitarian regimes, but also to urge competent institutions not to let them fall into oblivion, which implies a profound confrontation with the controversial aspects of our past. 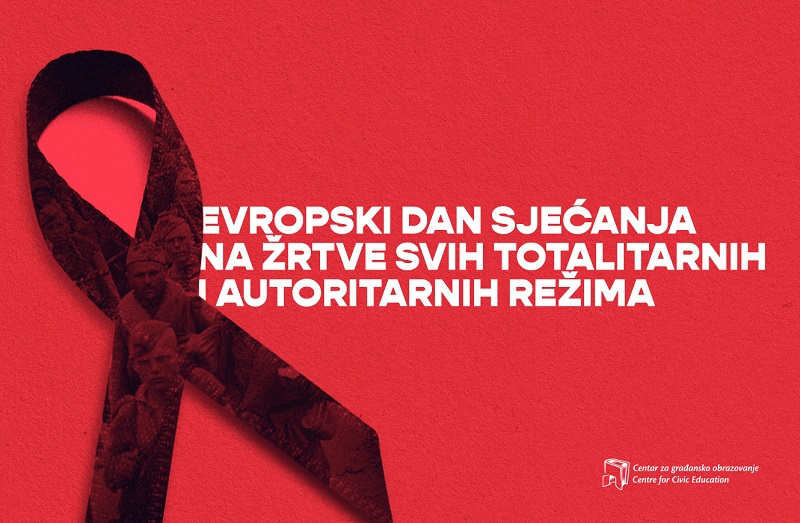 The response to unpleasant issues from the past cannot be repression, because it limits the development and sustainability of society on a sound ground. Such issues require the opening of a wider social dialogue, but also improvements within the legislative and institutional framework.  In this regard, the CCE has previously indicated the need for a law to be enacted to rehabilitate and indemnify the people from Goli Otok or their immediate family members, which the Government promised but never included in its agenda. It is necessary to form an intersectoral commission to evaluate the work of the Commission for the establishment of war crimes committed during the Second World War (1945-1947) and to give a final scientific assessment of trials and reprisals at the end and after the end of the Second World War. Also, it is necessary to create adequate educational material and modern manners of teaching totalitarianism and related issues to prevent their misuse of ideological and daily political purposes.

We also recall that the Parliament of Montenegro has adopted the Council of Europe Parliamentary Assembly Resolution from 2006 concerning the international condemnation of the crime of totalitarian communist regimes and the Resolution on removing the legacy of former communist totalitarian systems. Also, the European Parliament issued recommendations emphasizing that each country should set time and manner to commemorate the remembrance of the victims of totalitarian regimes and adapt it to its history and tradition. In Montenegro, no progress has been noted in this area and it seems that these documents are not relevant enough for the competent institutions to include them in their policies and practices.

An adequate attitude towards the legacy of totalitarian regimes can only be accomplished by an objective and unbiased consideration of all aspects of that time and achieving a consensual social assessment of that period based on dialogue and scientific facts. This is the only way to provide historical justice to the victims and their families, but also to prevent further manipulations that we are still witnessing. Finally, it is the only way to reach one’s own and unique culture of remembrance in Montenegro.