Centre for Civic Education (CCE) points out the importance of celebrating 9 May both as the Day of Victory over Fascism and the Europe Day. 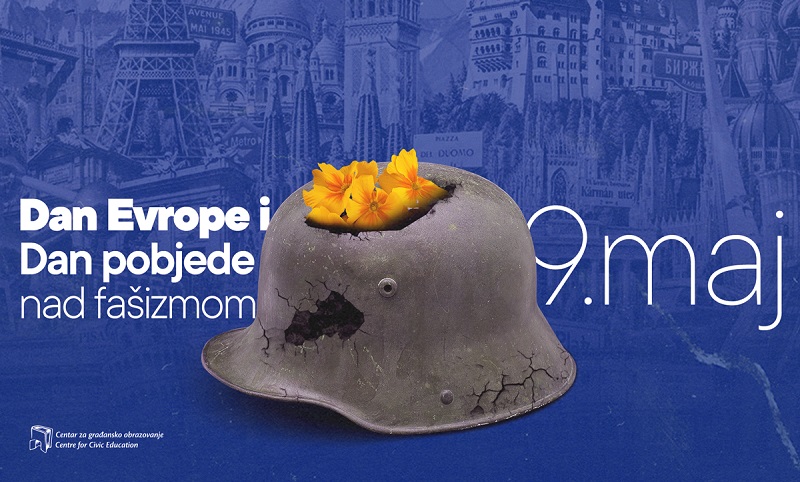 In most western countries, Victory Day is celebrated on 8 May – the day when all the Axle forces surrendered in Europe. As the surrender happened at 23:00 at local time in Berlin, which means that midnight had passed in Moscow, the countries that ideologically joined the Soviet Union after World War II celebrated 9 May as Victory Day. After the fall of communism and with the purpose of distancing from Soviet ideological heritage, some countries of the former Eastern Bloc, stopped celebrating 9May as the Victory Day. However, in some countries, amongst which is Montenegro, marking 9 May as Victory Day over Fascism is retained. The reasons for that are a disproportionally huge contribution of Montenegrin soldiers in The People’s Liberation Struggle (NOB) and the role of Yugoslav partisans in ruining the Axle forces. That is why that day is also an opportunity to highlight principles of antifascism as victorious forces against the most tragic period of European history into which it was brought by fascism, Nazism and local nationalistic structures.

Europe Day, marked on 9 May, on the anniversary of the Schuman Declaration, celebrates peace and unity in Europe. At a speech in Paris in 1950, Robert Schuman, former French Foreign Minister, set out his idea about the new form of political cooperation in Europe, which would make war between European nations inconceivable. His vision was to create a European institution which would connect and manage the production of coal and steel, and the treaty about establishing such an institution was signed in less than a year. Schumann’s proposal is considered to be the beginning of what we know as the European Union today.

The old continent in its history never had such a long period of peace and prosperity as we have after 1945. Foundations of that prosperity are ideals on which the victory in World War II was won, and on which the European Union was created.

In the shadow of economic and social crisis, pandemic and global movements which are shaking the European value system, relativization attempts to challenge all the fundamental values on which both anti-fascist Montenegro and a united Europe are based, without offering any alternative but essentially tribal fragmentation and aggression. In such circumstances, societies much more stable than ours would be shaken.

CCE assesses that Montenegrin society is still introspecting, torn between systems of different values incurred as a consequence of continuous fight for mere survival and will to be part of the progressive and prosperous European family. Even three decades after the transition, it seems like we are just entering the phase of a bitter awareness that there is no shortcut to progress and that the path which is strenuous and thorny depends solely on us.

CCE points out that our best allies on that path are those who are already in our society. These are long ago formed ideals of unity of diversity, coexistence and antifascism, but also awareness of the need to resist an external factor that wants to change it. Those ideals ensure the sustainability of the only possible concept of Montenegrin society – civic society.

Therefore, we should celebrate and mark 9 May – both as the Day of Victory over Fascism and the Europe Day, because these events are bound by the same thread – hope for unity and prosperity of Europe and faith in a better future.