“Findings indicating that the attitudes of Montenegrin citizens are developing in a positive direction when it comes to dealing with the past are encouraging, although it is a process that requires a lot of time and effort. The fact that citizens perceive non-governmental organizations as the most dedicated is an incentive for us in the NGO sector to continue developing initiatives in this area,” as it was assessed today, at the Centre for Civic Education (CCE), during the presentation of the findings of the public opinion research on transitional justice. 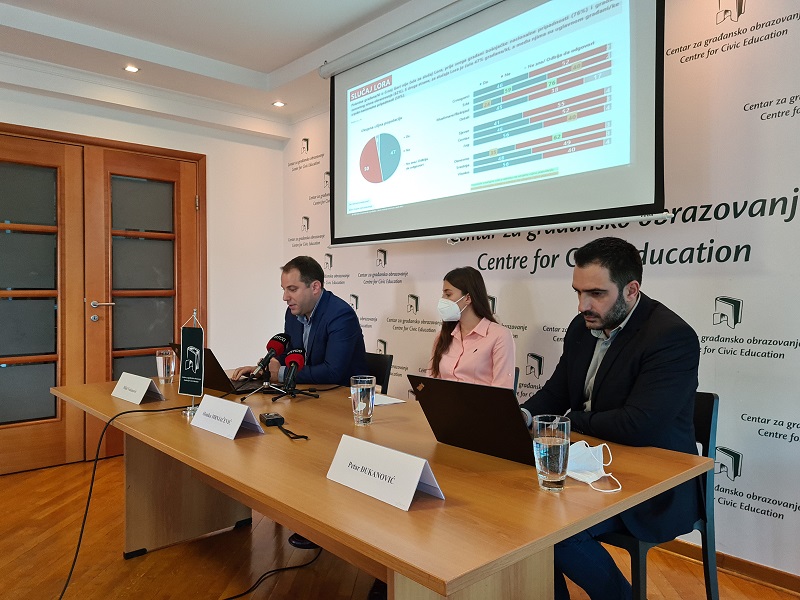 Miloš Vukanović, advisor at the CCE, reflecting upon the research findings, stated that “two-thirds of citizens (67%) consider that Montenegro participated in the wars of the 1990s, while one-quarter (24%) claim the opposite, which represents a significant increase in comparison to last year’s research, according to which 13% of respondents had a negative response to this question.”

Half of the citizens of Montenegro deem that there were war crimes committed in Montenegro, which is also more than last year, while Bukovica and Pljevlja, Štrpci, NATO bombing, and Kaludjerski Laz are spontaneously most often cited as crimes they have heard about.

“The dominant majority of Montenegrin citizens state that they know what happened in Srebrenica in 1995 (86%), and two-thirds of them define it as genocide, while others believe that it is a horrific war crime but not genocide, or that there was a war in which people were killed on all sides, but there are also those who consider that it was the set-up of foreign forces and a hoax to the Serbian people. The position towards Srebrenica has recently been in the public spotlight due to the statement of the Minister of Justice, Human and Minority Rights, Vladimir Leposavić, who claimed that he is “ready to recognize that the crime of genocide was committed in Srebrenica when it is unequivocally established.” More than half of the citizens do not agree with that statement of Minister Leposavić, which should be instructive for both political decision-makers and Leposavić himself,” said Vukanović. He also reminded that in nine cases before the Hague Tribunal, 15 people were convicted of genocide in Srebrenica, which is why many demanded his resignation, including the CCE.

“The vast majority of our citizens have also heard about operation “Oluja” [“Storm”] (86%), and three-quarters of them agree with the verdict of the Hague Tribunal that it is a “joint criminal enterprise“. It is indicative that half of the respondents have not heard of the Lora case, but it should be noted that this share is growing in comparison to the previous research. Of those who are familiar with the ’Lora’ camp, 30% believe that the victims were Serbs, one-fifth cited soldiers and reservists of the Yugoslav People’s Army (YPA), and only 14% claimed that the victims were Montenegrins,” said Vukanović.

Vukanović states that “almost all citizens (94%) know about the NATO’s intervention in the Former Republic of Yugoslavia (FRY) in 1999, but still do not know the exact number of victims, more precisely, just over one-fifth of respondents state that there were up to nine victims, while other assessments are higher.”

Petar Đukanović, Programme director at the CCE, pointed out that “more than half of the citizens (55%) believe that Montenegro has not dealt the war past of the 90s, while a third have the opposite position. The process of dealing with the past is supported by three-fifths of citizens (61%), while just over a quarter represent the opponents of that process.”

“It is a worrying that only one-third of citizens believe that the Montenegrin judiciary has the capacity to prosecute war crimes, which indicates a significant increase in that distrust in the judiciary. Also, half of the respondents do not know whether any of the Montenegrin citizens have been charged with war crimes in Montenegro, while over half of respondents do not know that the Montenegrin prosecution is investigating war crimes, nor that there have been war crimes trials. Amongst the one-third of those who know that there were trials for war crimes, the most famous are the cases of abduction of passengers from the train in Strpci and the camp “Morinj”,” Djukanovic specified.

Đukanović emphasizes the positive attitude of citizens towards regional cooperation in the investigation and prosecution of war crimes committed during the 1990s, which is supported by the vast majority (81%), but also the strong support for the establishment of RECOM (84%).

There are various and fragmented factors that influence the shaping opinions about the 90s events, whereby the predominant influence is non-formal education, followed by family, media, etc.

Miloš Vukanović pointed out that it is important that “the majority of citizens (85%) believe that individuals are responsible for crimes – not nations”, noting that “the majority (79%) disagree with the statement that members of their nation committed the most severe crimes during the wars of the 1990s and that almost three-fifths consider that all sides (58%) are equally responsible for the wars in the territory of the former Yugoslavia.”

More than half of the citizens have not heard of the Anti-War Movement of the 90s, as opposed to 43% of those who are familiar with this movement, while few know of some erected monuments dedicated to the victims of the 1990s wars.

“The attitude towards the Hague Tribunal is critical – half of the respondents consider that the Hague Tribunal was selective in its work, but also that everyone must respect the final judgments of that court. Only one-third assess the contribution of the Hague Tribunal to regional reconciliation as significant, while only one-quarter deem that this court has met its primary goal,” Vukanovic explained.

The findings of the research indicate that three-quarters of citizens believe that NATO actions in the FRY were not justified and that NATO committed crimes during the bombing of Montenegro. On the other hand, almost half of respondents consider that NATO membership is good for Montenegro.

Vukanović emphasized that the majority of respondents (84%) deem that every Montenegrin citizen who has committed a war crime must be sanctioned. “Furthermore, almost two-thirds (63%) of respondents think that ideologies and policies that ignited war conflicts and crimes during the 1990s still exist in Montenegro. Therefore, the fact that over three-quarters consider that young people should learn about the war events of the 1990s through formal education is significant. Interestingly, as many as 80% of our citizens state that they did not learn about the events of the 90s during their formal education, which confirms the need for these issues to get their adequate place within the education system,” he stated.

“When it comes to the efforts of political parties and coalitions for transitional justice and dealing with the past, citizens cite the Bosniak Party, followed by Social Democratic Party (SDP), Civic Movement United Reform Action (GP URA) and Democratic Montenegro (Democrats). Evaluating by categories of social actors, citizens assess that the greatest contribution is given by non-governmental organizations,” Vukanović concluded. 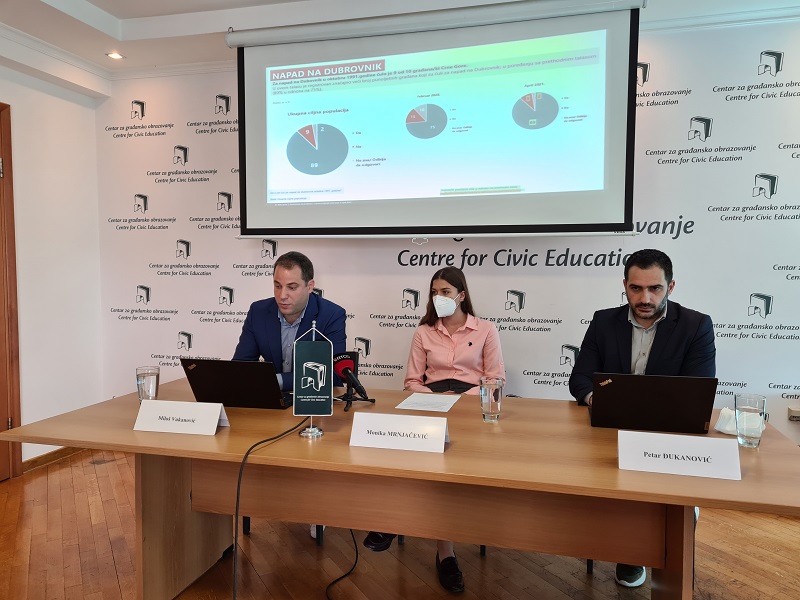 Expert support in conducting the field research from 15 to 20 April was provided by the Ipsos Strategic Marketing agency, with the application of a random representative stratified sample encompassing 828 adult respondents.

The research was conducted as part of the project “Dealing with the Past for the Future” which the Centre for Civic Education (CCE) is implementing with the financial support of the US Government, through the State Department Bureau for Combating International Drug Trafficking and Law Enforcement (INL).