On the occasion of the International Day for Universal Access to Information, which is marked on 28 September, the Centre for Civic Education (CCE) assesses that the authorities in Montenegro are still far from meeting the standards in proactive disclosure and enabling access to information. The work of the Agency for Personal Data Protection and Free Access to Information (APDP), which is responsible for the control and second-instance proceedings in the field of free access to information, does not contribute to that either. 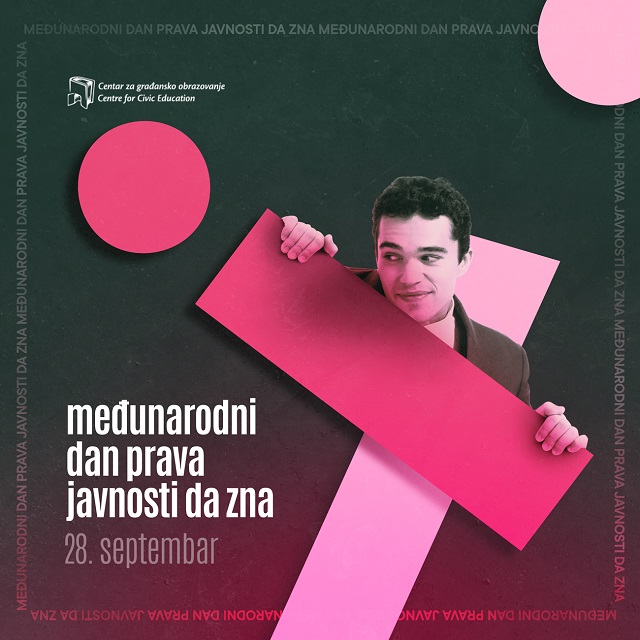 Although we are approaching the first year of the mandate of the new Montenegrin Government, the Parliament has not yet been sent draft amendments to the Free Access to Information Law, or a draft of a new law, which would remove obstacles to access to information, and consequently enable more transparent public sector work. Access to information is considerably complicated by the current legal decisions, which often leads to lengthy and often uncertain procedures. All this indicates a clear need for new legal decisions which would establish an adequate system of responsibility in the bodies for non-disclosure of data, as well as stricter penalties for untimely and illegal action on submitted requests for free access to information.

In its Annual Report on the Status of Personal Data Protection and Access to Information for 2020, which the Parliament refused to adopt, the APDP states that 4,805 requests for free access to information were sent to the authorities in that year. As many as a quarter of these requests received a negative response, meaning that access to information for 1206 requests was denied. The number of complaints submitted to the APDP remains high, thus in 2020, that body received as many as 3,000 complaints, which, compared to the number of submitted requests, indicates problems in the actions of first instance bodies.

The APDP continues to maintain the trend of not acting on complaints within the legal deadlines, and the reports do not provide details on the average time for dealing with complaints. The reports do not even contain information on the extent to which the Agency initiated supervision procedures before the body responsible for state administration affairs due to non-compliance with the Law on Free Access to Information, nor information on whether and how many requests to initiate misdemeanour proceedings have been filed by the APDP.

Although the Law makes it possible, the fact that data on this do not exist raises the question: how did the APDP, despite numerous and evident illegalities, not demonstrate its intention to act in the direction of reviewing the responsibility and punishing unscrupulous bodies and the responsible persons in them?

The CCE considers that a serious shift of all institutions is necessary in the part of proactive disclosure of information and handling of requests for free access to information. Therefore, the amendment of the existing legal solutions must be one of the priorities of the Government, in order to enable the use of this mechanism in its full capacity. In this context, the CCE does not consider the Government’s actions so far to be encouraging, given that its departments have not expressed readiness to comply with the applicable legal provisions, which results in the impossibility of accessing numerous relevant documents and information.

It is particularly worrying that the new Government, which promised a huge improvement in transparency compared to the previous one, in practice continues on the beaten path of non-transparency, but also the abuse of certain legal institutes to conceal information. Thus, contracts with experts hired by the Government of Zdravko Krivokapić in certain departments, rent of premises for temporary or long-term work, contracts with directors of certain public companies are declared a business secret and numerous transactions from the state account or documentation on controversial jobs remain an unknown as well.

The International Day for Universal Access to Information was established in 2002 at a joint meeting of representatives of mostly non-governmental organizations in Sofia, Bulgaria. It is marked around the world to promote the right to free access to information, as one of the basic human rights, but also to encourage citizens to exercise their right, whereas the authorities to be more transparent in their work.