Centre for Civic Education (CCE), on the occassion of 23 January – the Day of Journalists of Montenegro, uses the opportunity to recall the chronically bad status of journalists in Montenegro. An unenviable financial position, insecure labour relations, endangered security, censorship and self-censorship remain worrying indicators of the media scene. From 2004 until today, no case has received an appropriate epilogue, and we do not stop recording new cases of attacks on journalists and journalist teams – 21[1] attacks in 2021, which is significantly more than in 2020.

The role of the media that respect the Code of Journalists gained importance precisely in the highly polarized and toxic socio-political atmosphere we live in. Only by informing the public based on professional standards and reviewing the quality of decisions of those in power, journalists can contribute to building a society where the public interest will be above personal and party. 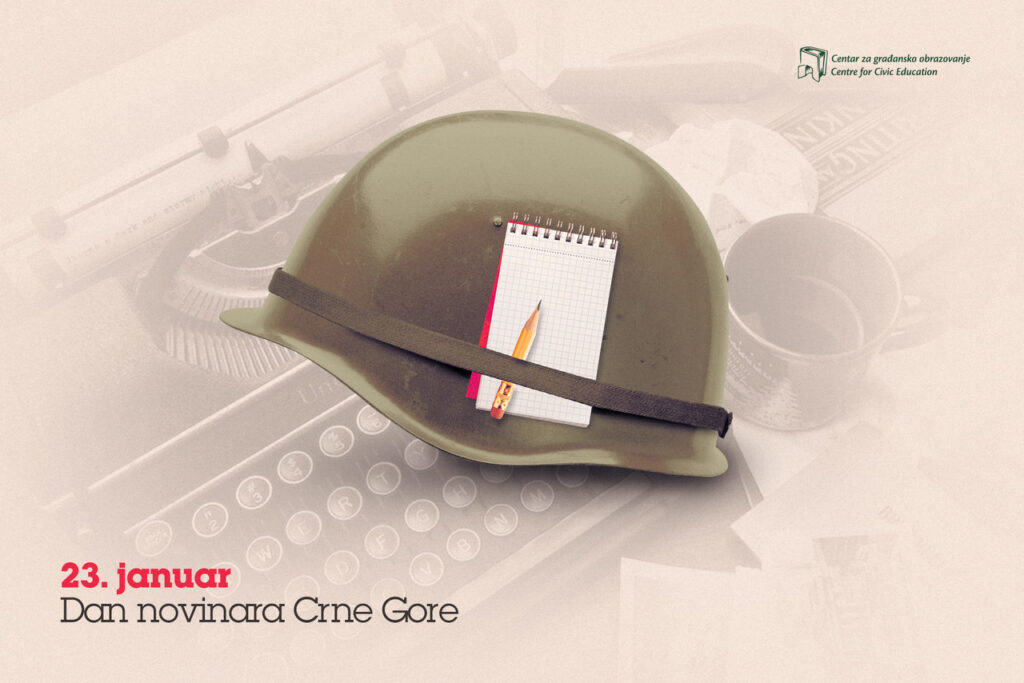 At the same time, the CCE recalls on the unregulated media market, the growing number of unregistered media that violates all ethical principles, with a flood of misinformation and false news, as well as the spread of hate speech on social networks, especially in comments on portals, which is explicitly prohibited by the Media Law. The Montenegrin media scene is changing intensively in the area of media ownership, which is not enough addressed.

In the analysis “Media in Montenegro in the eyes of citizens and journalists“, published by the CCE in June 2021, among other things, 10 deep, qualitative interviews were conducted with journalists, editors and media owners. Most of the interviewed media representatives agreed with the statement that the previous government and state authorities restricted investigative journalism, half of the interviewees believe that the owners have a full influence on the editorial policy of the media in which they are engaged. In the same analysis, all interviewees agreed that the safety of journalists should be one of the key priorities, emphasizing that they do not have sufficient conditions to engage in investigative journalism in these circumstances.

CCE points out as a positive fact the unanimously adopted amendments to the Criminal Code in the Parliament of Montenegro that prescribe stronger criminal protection of journalists, which is also the result of the struggle of the non-governmental sector for a better status of journalists.

CCE expects all three branches of the government to work hard, in their domains, on improving the working environment for journalists, but also strengthening professional standards. It is also crucial to protect the working status of journalists while improving their economic conditions.

CCE continues to contribute to the improvement of the media scene in Montenegro through initiatives aimed at protecting journalists, as well as the media space from internal and external manipulations, all to achieve democratic standards so that a new 23 January is a day for celebration and not an occasion to review the numerous problems that burden journalists.