Centre for Civic Education (CCE) today presented the handbook for reporting on persons with disabilities ‘Unpacking Prejudice’. On that occasion, it was pointed out that starting from the approach, and terminology itself, the focus should be on the person. It is important to show individual qualities, and whether someone is a “wheelchair user” or a “white cane” is less important and does not have to stand out in the text, as it was concluded at the press conference about the publication that provides guidelines for media reporting on PWD, and who should be supporters of the development of a culture of human rights. 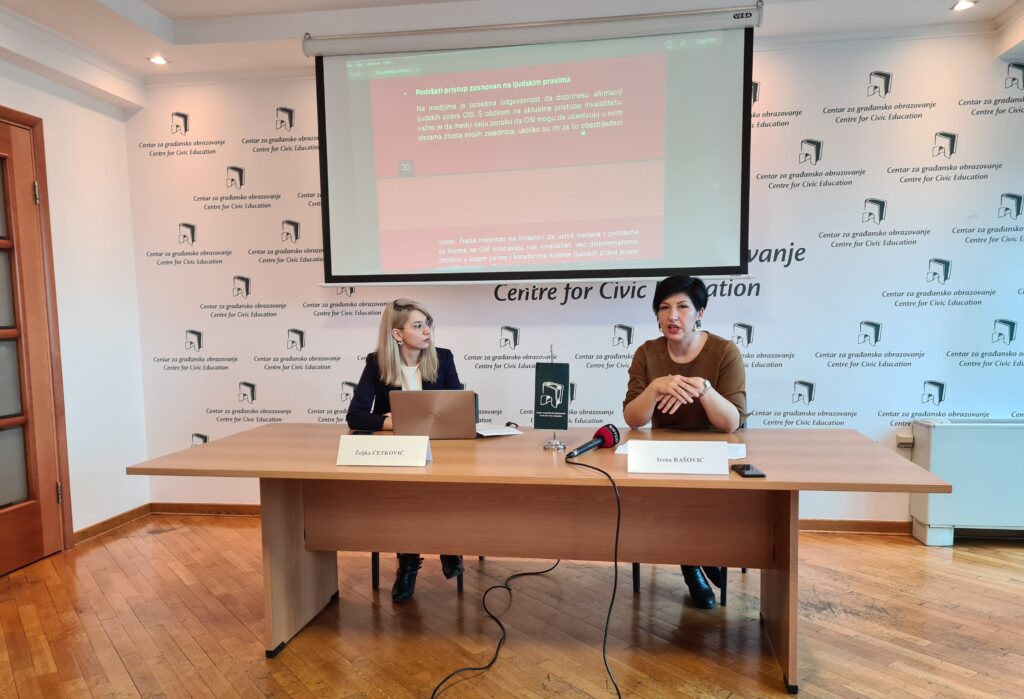 “The handbook aims to raise the level of awareness and understanding of the media about disability and the application of professional standards in work, in order to contribute to the promotion of access to disability based on human rights and the prevention of discrimination. ‘The handbook is intended for media professionals as a support to research and reporting on PWD in a dignified and objective manner, which would contribute to the overall affirmation of the rights of persons with disabilities’, said Željka Ćetković, Active Citizenship programme coordinator.

‘It is highly important to support a human rights-based approach and for the media to send the message that PWDs can participate in all spheres of life, if they are provided with the necessary conditions. We should insist on the fact that the cause of barriers and problems that PWDs face is not a disability, but a discriminatory society in which we live and the constant violation of human rights to which PWDs are exposed. With such an approach, the media help to strengthen PWDs and their active participation in social, economic, political and cultural life’, said Irena Rašović, journalist of RTCG and author of the handbook.

She highlighted that PWDs continuously point out the need to change the approach and the manner of reporting on issues that are important to them, which has given certain results, but much work remains to be done.

The sporadic presence of information indicates a lack of systematic reporting on PWD, and the approach to the topic itself is often controversial, whether the emphasis is on the obstacles faced by an individual with a disability or their shortcomings.

‘It is also problematic that the race for circulation, readership, clicks on pages, does not recognize such topics as important. Media editorial offices and editors are generally not interested in education in this area, because these are not topics that bring publicity, forgetting that the first and basic obligation of the media is to encourage the integration of all minorities and human rights development in general’, she emphasized.

PWDs should be covered as objectively as any other group. ‘Disability must not be an occasion for it to be reported protectively or compassionately, nor for regular life activities to be exaggerated. People with disabilities are not “poor” or “helpless”, nor are they “superstars” or “heroes”, they do not live “despite the disability”, but “with” the disability and it is completely normal for them to finish school, have a job and a family. Sensationalism and pathetic reporting lead to stigmatization, disappointment and further discrimination against people with disabilities. Such an approach diverts attention from the essence, barriers and the environment are not being spoken about, nor is the way to overcome them, and disability is emphasized’, explained Rašović.

She also referred to the importance of terminology that must follow the guidelines set by the UN Convention on the Rights of Persons with Disabilities. ‘It is necessary to use terms which are not offensive and which do not disparage the personality of a person with a disability in any manner’, she pointed out, adding that even when illustrating, one should avoid portraying physical defects. ‘We should not emphasize helplessness, shortcomings, loneliness, but instead of isolated PWDs, show a broader context, choose photos in which PWDs are not alone and sad and in which their disability is not dominating’, said Rašović.

Rašović underlined the importance of giving individuals with disabilities the opportunity to speak on their own behalf instead of representatives of institutions, health care, or other entities doing this for them.

‘Also, stories “about” and “for” PWD should not be distributed only via specialized shows or special columns intended exclusively for that target group as an audience, to contribute to a balanced presentation of PWD, but also to deconstructing stereotypes and a better understanding of this population’, explained Rašović. 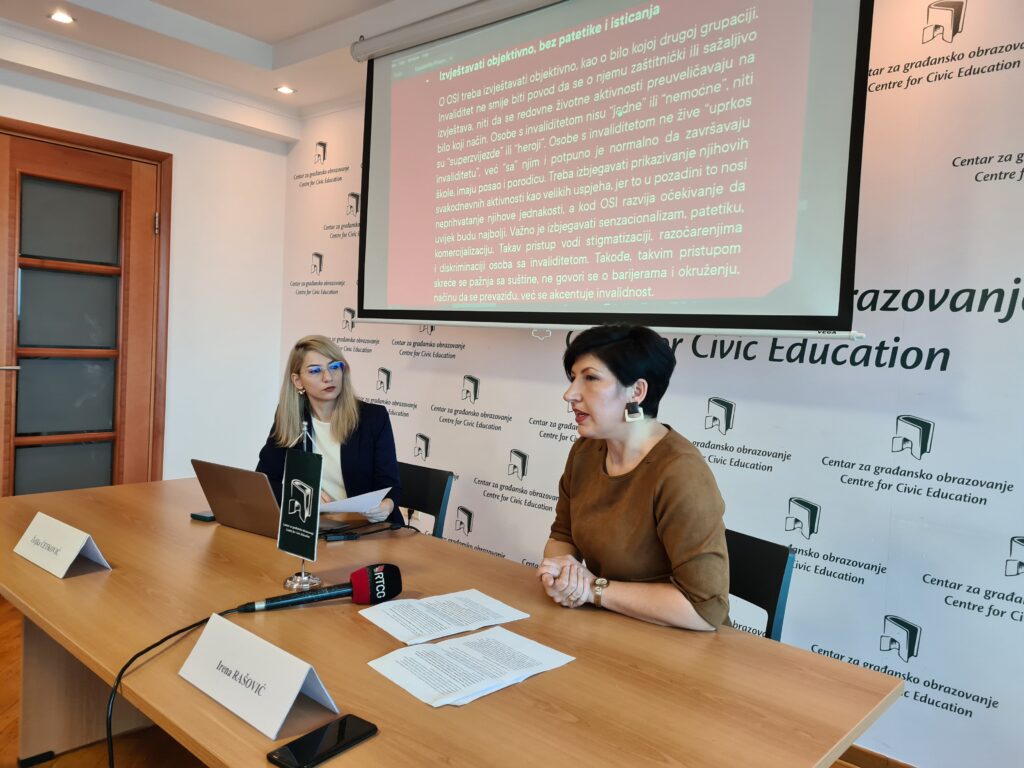 She pointed out that media houses should enable journalists to improve themselves in trainings that will sensitize them to seriously deal with these topics, but also to engage PWDs in the positions of creators of media content. ‘Apart from the few informative shows that have sign translation, the remainder of contents should be made accessible to persons with disabilities, especially educational programs. In Montenegro, TV stations do not provide translation of their content into sign language, portals do not have options to adapt the text to people with visual impairments or dyslexia, and no printed media print even certain Braille content, leaving PWDs deprived of information and uninformed even about the most important things that concern them as well’, pointed out Rašović.

The Handbook on Reporting on Persons with Disabilities was developed within the EqualABILITY project, implemented by CCE in partnership with the Association of Parents of Children with Disabilities in Podgorica and financial support from UNDP, through the project ‘Reform of the National Disability Assessment System’ funded by the European Union.