Center for Civic Education (CCE), on the occasion of 4 April – Students’ Day, reminds of the neglect of the student population in Montenegrin society, but also calls on students to be more active, especially in the fight for their rights, better study conditions and a more prosperous future.

Preoccupied with daily political topics and projections, institutions and decision-makers forget about the problems and needs of students. Even in rare cases when decision-makers mention young people, there is an obvious lack of sincere intentions to improve their position, especially in the part of the systemic response to the great social problem of young people leaving the country. The CCE has recently published a video vignette on that topic – “Youth and the knowledge of packed suitcases “, which is available to the media for further use. 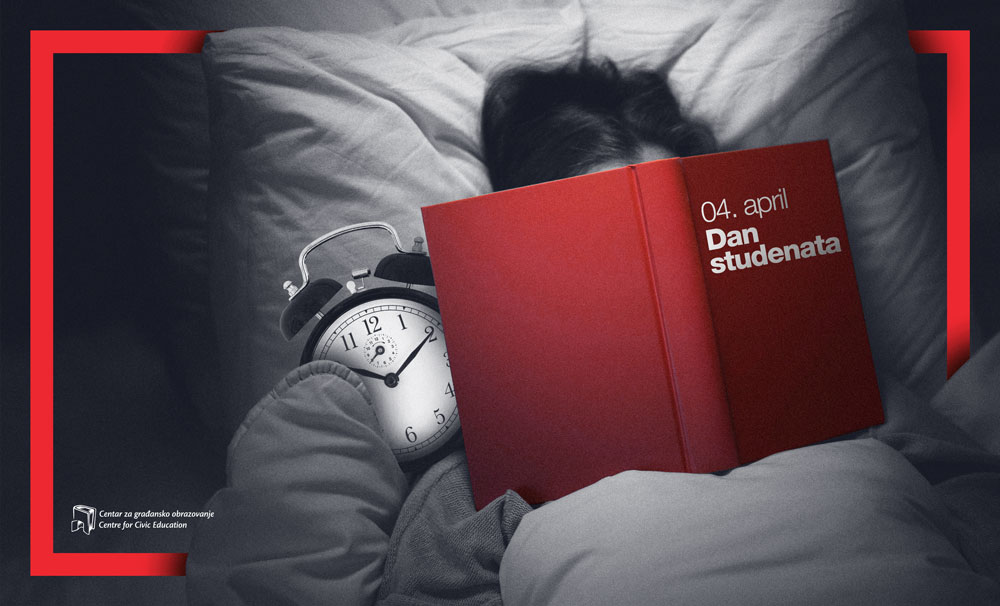 CCE points out that the work of students’ organizations should be focused on the general and wider students’ welfare, as well as that students should have a clear standpoint concerning key value issues, regardless of the position of decision-makers. In that context, the CCE points out as a positive example the reaction of the Student Parliament against the appointment of priest Marojević to the Managing Board of the University of Montenegro, but also the organization of collecting signatures condemning Russian aggression.

The conditions of study must be improved, as well as the state of affairs in dormitories, in order to facilitate this process, in the area of housing, for those who study outside their home cities. Also, more work is needed in relation to the concept of social policy that includes the problems of young people. The CCE reminds that the fight for students’ rights is not reduced to the number of credits that can be transferred, whether an additional exam period will be allowed, etc. Namely, it is necessary to solve the essential, and not only technical issues. In this context, students themselves must express more interest in their well-being.

The situation at the academic level is especially worrying, as it is chronically bad, and further complicated by the current disintegration in the relevant Ministry of Education, Science, Culture and Sports. Among other things, this Ministry did not fulfill its obligation from last year’s Government Work Programme and drafted the Law on Higher Education to address at least some of the shortcomings in that area.

The CCE reminds that although the conceptually well-conceived Vocational Training Programme, which is available to students after completing their undergraduate studies, has not been well implemented or controlled in practice. This is evidenced by the negative trend of interested users, hence in 2021 the lowest number of university students so far applied – 2,874, while the number of jobs offered was the highest so far – 12,560. Taking into account that this is a state programme, it should be binding for decision-makers to be more responsible towards the invested funds in relation to what is obtained as a result.

The CCE calls on students to become more involved in the struggle to improve their position and exercise their rights, but also to make a stronger contribution to overall social progress. Also, CCE urges competent institutions to show more understanding of their problems and work more seriously on providing conditions for the education and work of young people.