Yesterday at noon, a memorial gathering in front of the police building, the Herceg Novi Security Centre, marked the 30th anniversary of the war crime of deportation of Bosnian-Herzegovinian refugees organized by Human Rights Action (HRA), Centre for Civic Education (CCE) and ANIMA – Centre for Women’s and Peace Education, in the presence of the families of the victims of crime and, for the first time, ministers from the Government of Montenegro. 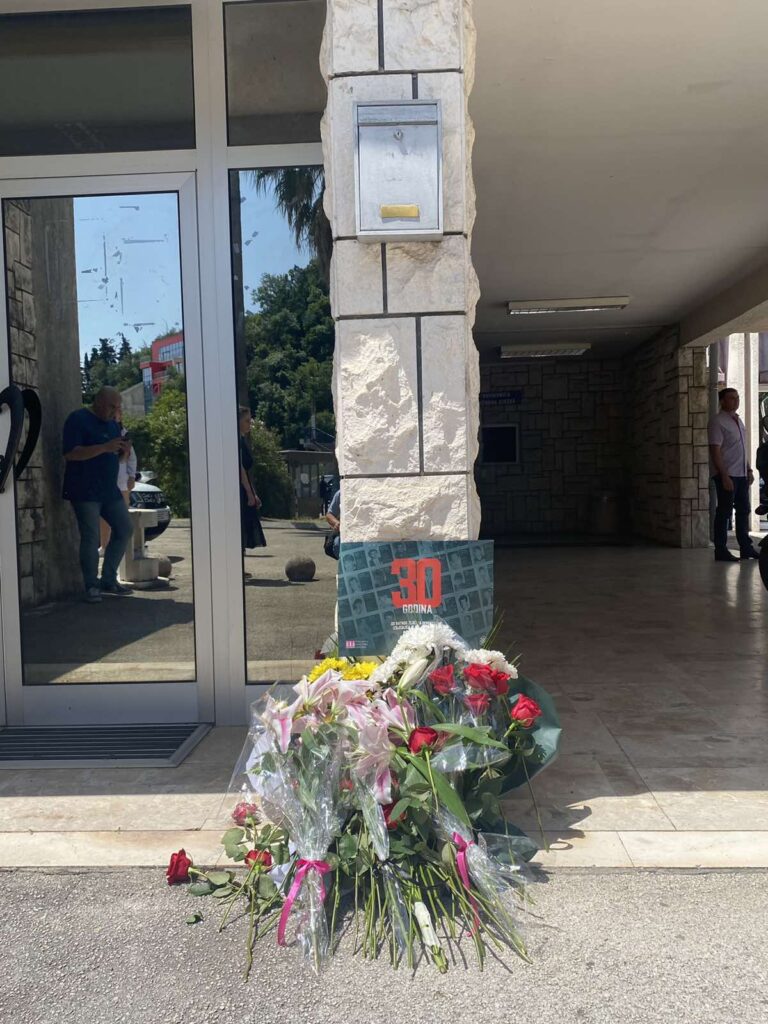 Although once again we commemorated the thirtieth anniversary of the crime without reopening the criminal investigation, without a monument and a day of remembrance for the victims, we are encouraged by the presence of government representatives, their apologies to the victims’ families and the promise to advocate for a monument and Remembrance Day. We expect the Chief Special Prosecutor to reopen the investigation of this unpunished war crime.

Yesterday was a day of historical significance for Montenegro, which, we hope, will have a positive impact on the region as well. We expect to gather next year at the same place with the monument and the officially declared day of remembrance of the victims of this crime, with a shift towards the realization of criminal justice. 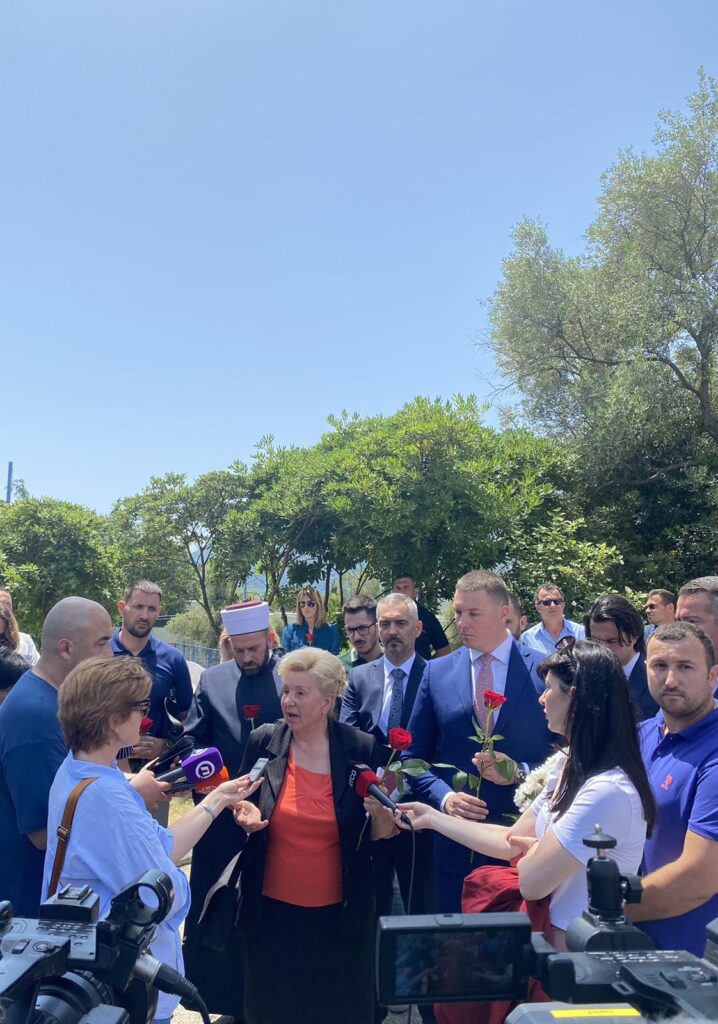 For the first time this year, ministers in the Government of Montenegro attended the commemoration of the anniversary of the deportation, Minister of the Interior Filip Adžić, Minister of Justice Marko Kovač, Minister of Labour and Social Welfare Admir Adrović, Minister without Portfolio Adrijan Vuksanović, as well as the Director of the Police Directorate Zoran Brđanin. This year, as well as last year, the gathering was attended by the head of the Security Centre of Herceg Novi, Predrag Žižić.

For the first time in 30 years, members of the victims’ families heard a long-awaited apology from the police and the Interior Ministry for the illegal arrest and extradition of refugees to the army of the Republic of Srpska of B&H.

“…Out appearance today as the representatives of the Government of Montenegro, representative of the Police Directorate, take as an apology of Montenegro and its institutions. We really want to say that this is something that must never happen again in Montenegro. “ – Filip Adžić, Minister of the Interior.

Also, the Minister of the Interior publicly supported the long-term initiatives of non-governmental organizations to erect a memorial at the gathering place and mark the day of remembrance for the victims of this war crime.

“… What we have been doing together for years is the fight against cover-up and oblivion. We do not allow the war crime against the victims of deportation to be covered up, despite the judges and prosecutors who tried their best to do this. We do not allow the victims to be forgotten, because they are our warning and our hope that, as long as we remember them and sympathize with their families, we will be able to save ourselves and our families from such suffering and such sins in the future.” – Tea Gorjanc Prelević, Human Rights Action (HRA).

“… What we have heard today is actually the face of war, and everyone who is here today should remember that when they make any decision, but especially the decision that there should be a war.” –  Ervina Dabižinović, ANIMA – Centre for Women’s and Peace Education.

“… I would like to say once again to those who think that time will do its thing and that oblivion will prevail, that it must not and cannot happen. We have an obligation to remember the crime, to fight for justice, for the victims and their families. Montenegro, of course, must not allow justice and dignified remembrance of these victims to wait another thirty years!” – Petar Đukanović, Centre for Civic Education (CCE). 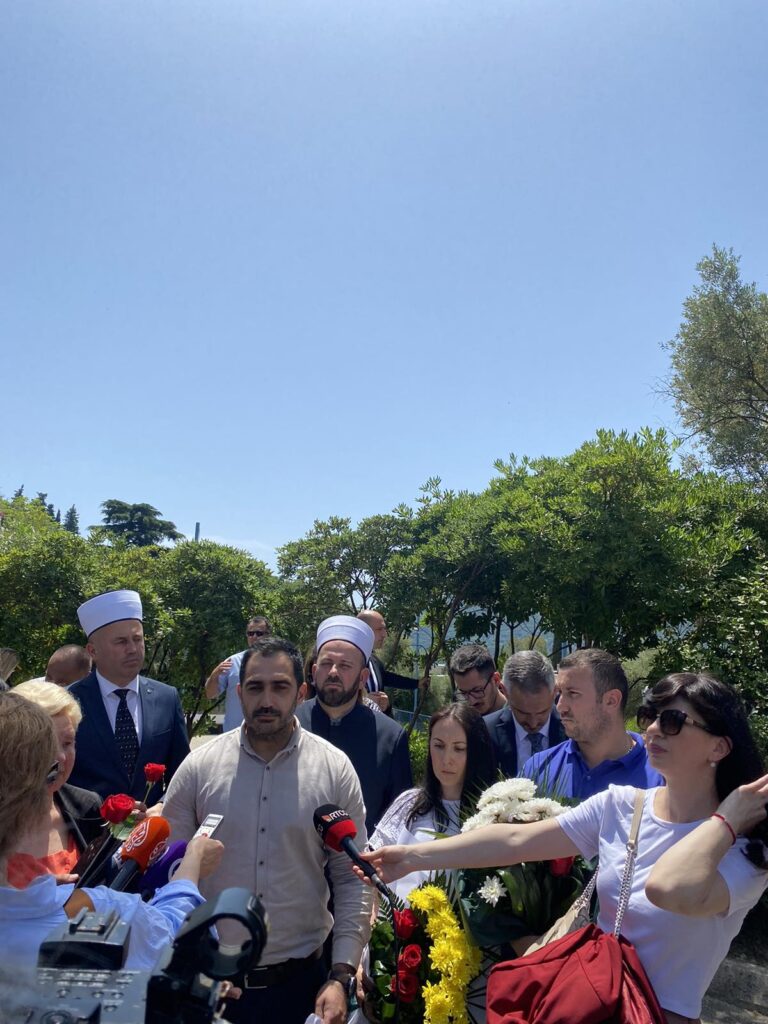 Unofficial, civic, Montenegro, for 18 years, pays tribute to the victims of this war crime every year, and this is the 13th memorial gathering in front of the Police Directorate building in Herceg Novi, from where most of the illegally arrested people from Bosnia and Herzegovina were extradited to the army of the Republic of Srpska. This year, too, we do not allow the victims of this war crime to be forgotten, we demand the establishment of criminal responsibility and a worthy memorial for the victims.

We remind that in May 1992, the Montenegrin police illegally arrested at least 66 civilians aged 18 to 66 who fled to Montenegro from the war that was already raging in Bosnia and Herzegovina and handed them over as hostages to the Bosnian Serb army led by Radovan Karadžić and Ratko Mladić to serve them for the exchange of prisoners of war. Written documents and a final verdict of the criminal court testify to this fact. All those extradited from Herceg Novi on 27 May 1992 were killed shortly afterwards, while another group was sent to the Foča concentration camp (KPD) on 25 May 1992, and only a few survived. The bodies of the victims deported from Herceg Novi on 27 May 1992 have not yet all been found, nor is the place where they died known. In the police action, at least 33 civilians of Serbian nationality were arrested and deported for the reason of forced mobilization in the army of the then Republic of Srpska. We have no information that any of them were killed.

The victims of this crime are indisputable, Montenegro paid compensation to their families after four years of settlement on the basis of a settlement due to illegal actions of the Montenegrin police, which led to death and the most severe torture of survivors. That they were illegally arrested and extradited as hostages was established by a final criminal verdict in Montenegro, as well as by the verdict of the Hague Tribunal in the case against Milorad Krnojelac, the warden of the camp in Foča. However, the Montenegrin court did not punish this crime. The decision of the European Court of Human Rights in the dispute with Montenegro is pending, as initiated on behalf of the group of mothers, daughters and sisters of the victims by the HRA Executive Director, Tea Gorjanc Prelević, since the state did not respect the human right to life and the prohibition of torture, because it did not provide an effective investigation and adequate prosecution of the crime.

Ten years ago (in 2011) ago, the HRA, CCE, ANIMA and former member of the Council for Civil Control of Police Work, Aleksandar Saša Zeković, sent three initiatives to the then authorities, of which only one has been accepted so far – a public apology from the Montenegrin police for illegal arrest and the extradition of refugees to the enemy army of the Republic of Srpska of B&H. 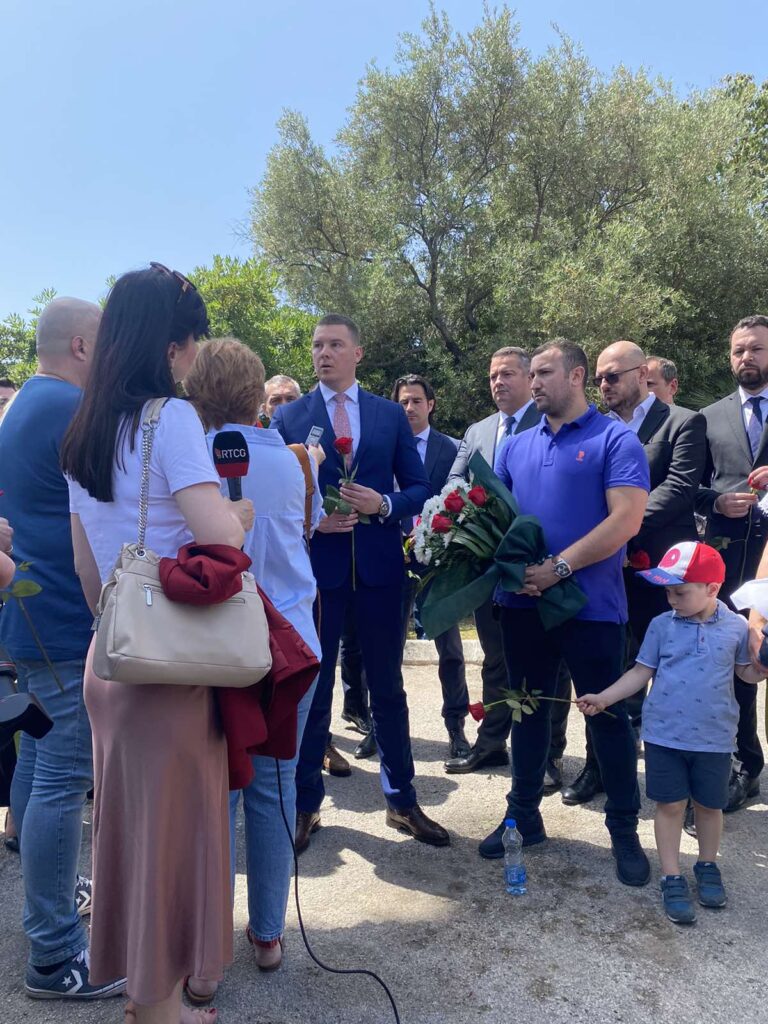 Submitted initiatives that have not yet been accepted are to those sent to:

1) the President of the Parliament of Montenegro, Ranko Krivokapić, and all the heads of the parliamentary clubs to declare Remembrance Day for the victims of the crime of deportation of refugees in 1992;

2) to the Prime Minister of Montenegro Igor Lukšić, Interior Minister Ivan Brajović and Culture Minister Branislav Mićunovic, as well as then-Herceg Novi Municipal Assembly President Dejan Mandić – to erect a memorial to the victims of the 1992 deportation of refugees in front of the Herceg Novi Police Department building and thus support the wishes of the families of the victims.

On 19 May 2021, we also sent an initiative to the new President of the Parliament of Montenegro, Aleksa Bečić, for the Parliament to declare a Remembrance Day. He replied that the law should be changed for that, but he did not initiate the change.

We sent the initiative for erecting a memorial to the victims of refugee deportation to the councillors’ clubs of the Herceg Novi Municipal Assembly after the formation of the government in that municipality, as well as to the President of the Herceg Novi Municipal Assembly, Ivan Otović, who did not respond. Last week, we informed the president of the municipality of Herceg Novi, Stevan Katić, about the initiative, who also did not respond.