The goal of any regional initiative should be peace and prosperity in the Western Balkans, and the path to that is the European Union (EU) enlargement process and the recently revitalized Berlin process. This was announced in the second part of the conference “Regional initiatives in the Western Balkans – costs and benefits?“, organized by the Centre for Civic Education (CCE) with the German organizations the Society for Southeast Europe (SOG) and the Friedrich Ebert Stiftung (FES). 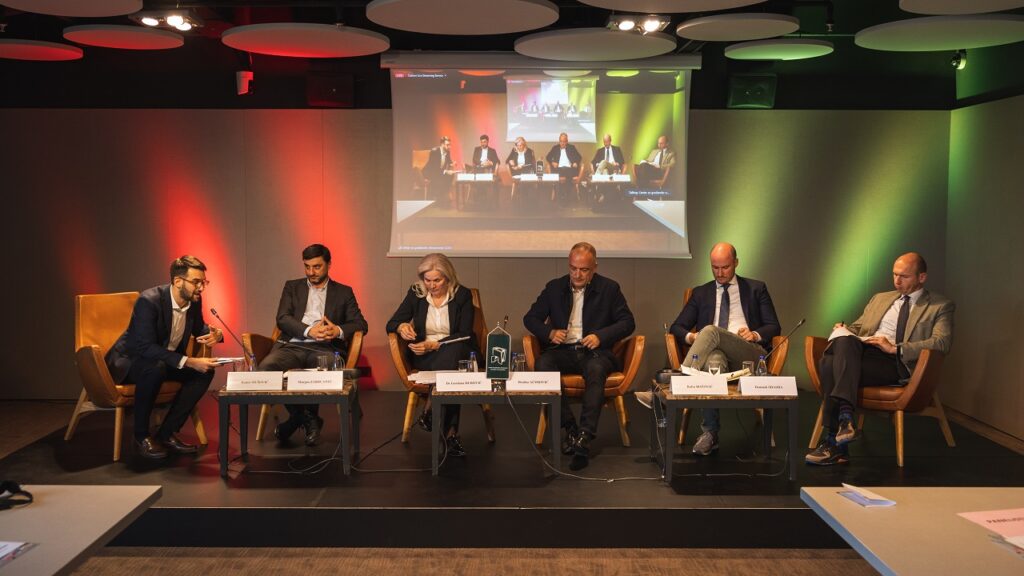 He said that the Open Balkans promotes freedoms, represented also in the EU, with an emphasis on the freedom of movement of people and goods. “In the economic sense, the Open Balkans is dedicated to freedom. I agree that there is a political basis, but it is an economic initiative“, stated Zabrcanec.

He stated that it is not true that the Open Balkans is not transparent since all documents are available on the website and added that the initiative is inclusive. “We have an open-door policy, which means that we invite Montenegro, Bosnia and Herzegovina and Kosovo to join us. That was also recognized by Escobar (U.S. special envoy for the Western Balkans)“, said Zabrcanec.

As he pointed out, the Open Balkans has a political direction, which is the European Union. “The goal of the Open Balkans is for each member to become a member of the EU, there are no other political visions and goals”, underlined Zabrcanec. 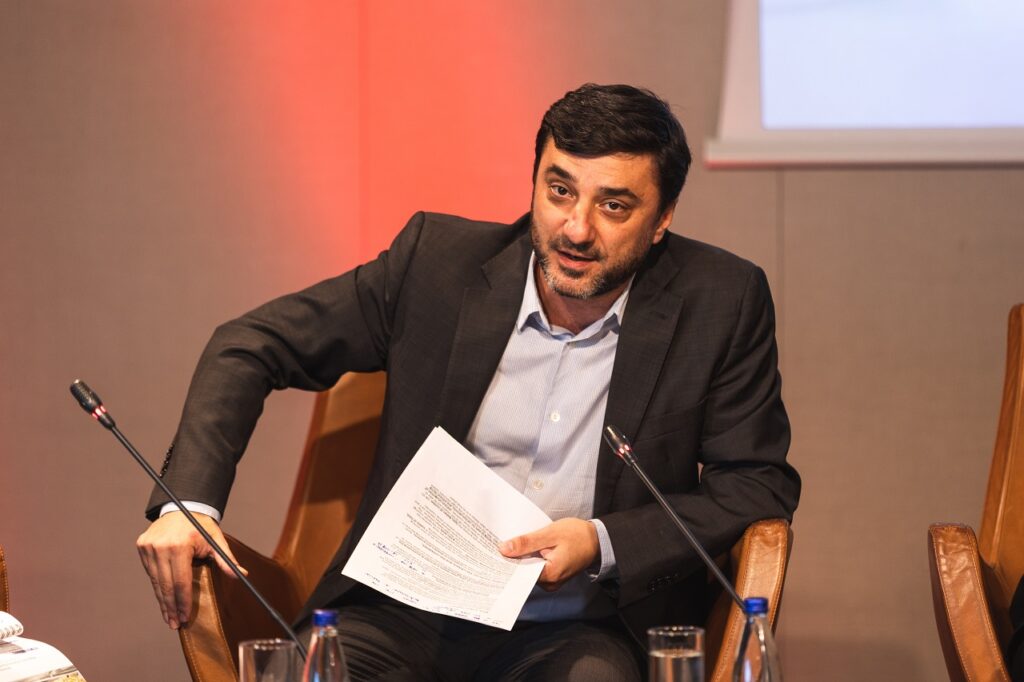 He stated that this initiative has tangible results, which are especially recognized in the business sector, but also among citizens. “The three countries helped each other during national disasters. The so-called “green lines” at border crossings speed up the transport of food. Our three countries help each other during the food and energy crisis“, concluded Zabrcanec.

Professor at the Faculty of Economics of the University of Montenegro (UoM) and president of Montenegrin Pan-European Union (CPU), Gordana Đurović, considers that the Open Balkans initiative has local ownership, but also stresses reservations about that process. “Open Balkans is the idea of the Balkans without borders, and if you do not have borders, that means weaker controls“, Đurović assessed.

She said that not only economic freedoms are important for the EU integration process, adding that the focus should also be on civil liberties and human rights. “When you do not have a unique voice, it is more difficult for initiatives to function,” Đurović underlined. 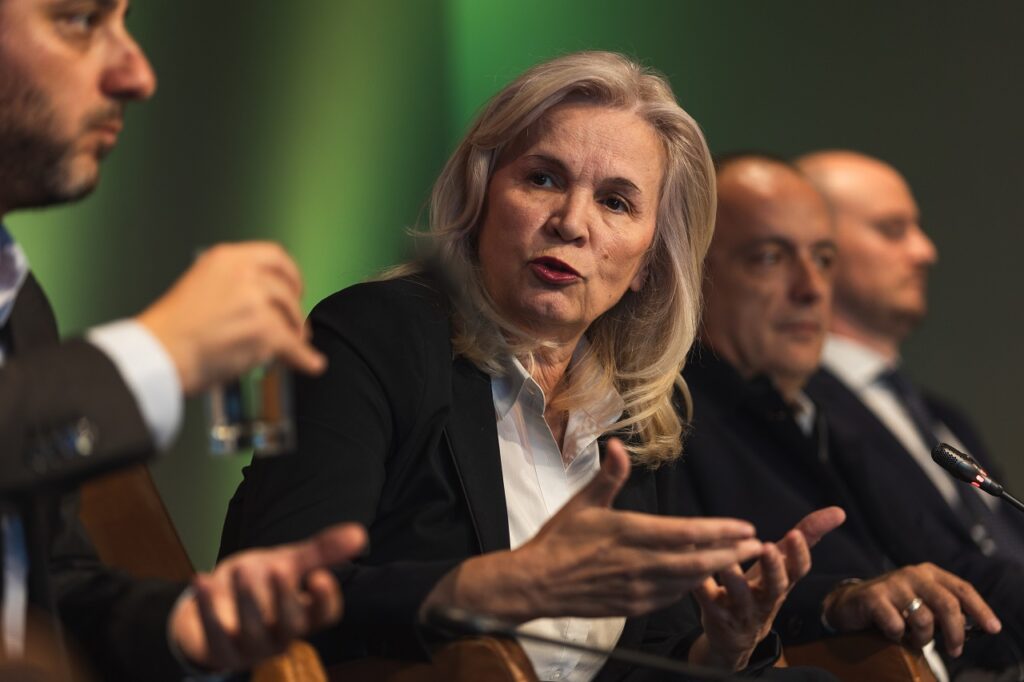 She said that Montenegro was cooperative from the beginning, but it is not competitive. “We are small, we do not have standardized products and our producers sell the most on the domestic market. If there is a big competition, big companies will not cooperate with domestic ones, but will import their own and we will close”, she explained.

As she clarified, within the Open Balkans there is no EU to monitor the entire process, nor there are any structural funds that exist in the EU. She also asked who guarantees that the Open Balkans is the path to the EU and not some form of the Balkan Union. ‘’If there are no borders in the Balkans, the EU will not tolerate goods leaving the Union, except according to European standards. Borders will exist between the Balkans and the EU, from the Balkan budget and in the form of the Balkan customs service. Who will say that this is not an institutionalization of some Balkan customs union?“ Đurović stated.

Economic analyst and former diplomat from Bosnia and Herzegovina Draško Aćimović stated that, from the economic side, the area of the Western Balkans should be rounded to attract international investments. He considers that the Open Balkans facilitated and accelerated the Berlin process for many reasons. “On one hand, we have state leaders – prime ministers and presidents who speed up the process themselves. They also initiated the Berlin process, which makes me happy, and we need both processes because, at least in Bosnia and Herzegovina, they will certainly turn into one”, said Aćimović. 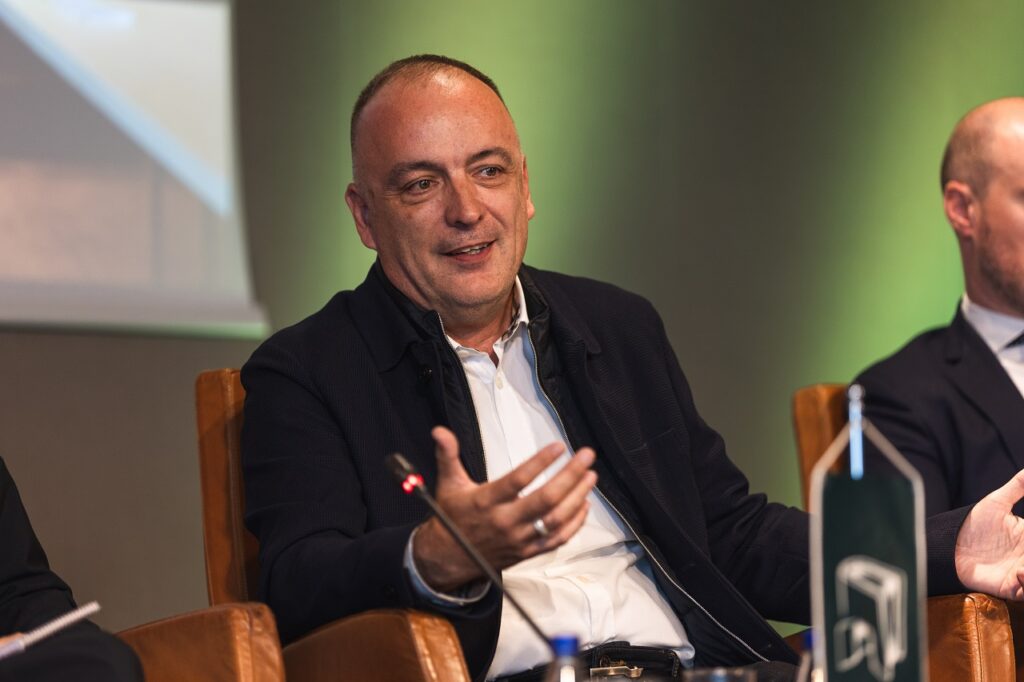 Aćimović said that analyzes in the Western Balkans are constantly being carried out, but no solutions are given on how to get out of the crisis. “We need to look for solutions, and then we can expect support. Let’s try not to talk about wars, but to come to an agreement”, said Aćimović.

The Executive director of the Regional Academy for Democratic Development (ADD) from Serbia, Balša Božović, assessed that the goal of the six countries of the Western Balkans is to enter the EU, stating that Serbia is not going that way. “All reasons for the disintegration of Yugoslavia are present in the regime that is currently in power in Serbia, and the Ukrainian crisis exposed things. Open Balkans starts as an initiative that runs parallel to the non-paper of (former Prime minister of Slovenia) Janez Janša,” said Božović.

He stated that nowadays Greater Serbia is not explicitly present, but there is a euphemism in the form of the so-called Serbian world and said that it is a delusion of the international partners that all the countries of the Western Balkans want to join the EU. “This is not true. Serbia does not want to join the EU. While the war in Ukraine is raging, that country is neutral in foreign policy, and if you are neutral, you are supporting the aggressor. Serbia is linking to Russia, and that is problematic if we say that the Open Balkans supports the path to the EU”, Božović believes. 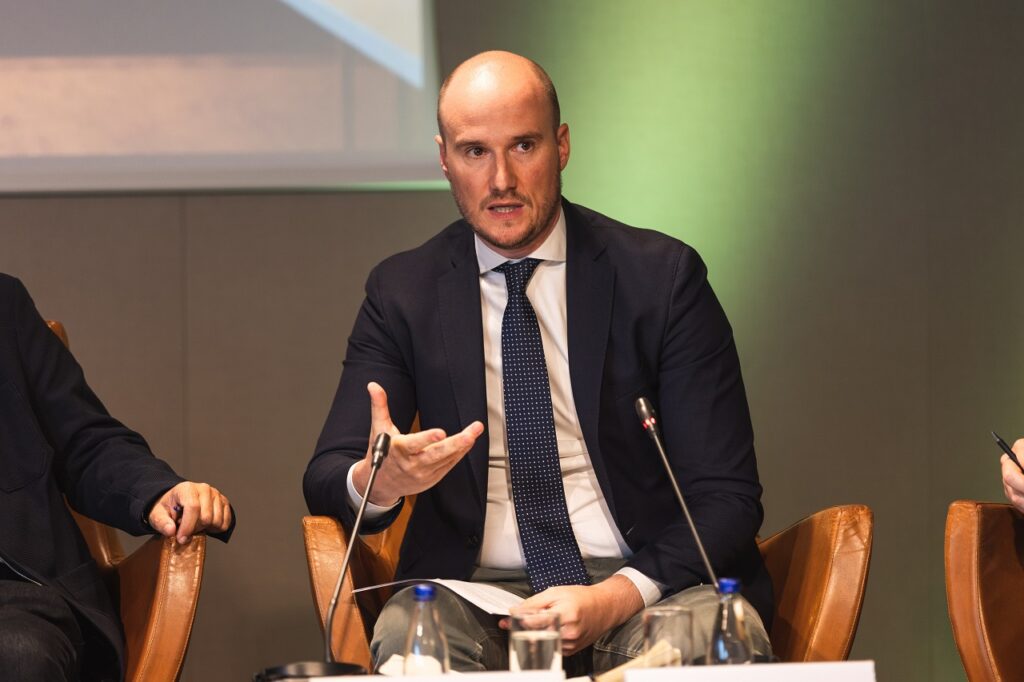 The Executive director of the European Policy Institute from Kosovo, Demush Shasha, said that the goal of any initiative should be peace and prosperity in the Western Balkans, like the one created in the EU.

According to him, the road to that is the enlargement process and the Berlin process. “Anything that deviates from that is aimed at destabilizing the region. They should convince us why they do not accept the Berlin Process, instead of us convincing them why we should not be in the Open Balkans“, Shasha pointed out.

As he explained, the Berlin Process has a clear goal of integration into the EU, it has six participants as opposed to three in the Open Balkans, which also has neither economic funds nor administrative infrastructure. “The most important difference – arbitrators. This region has a complex history. We established a rule that, whatever the question of cooperation is, the goal will always be the presence of the EU. They are neutral arbitrators and authority that we all accepted through the Berlin process“, stated Shasha. 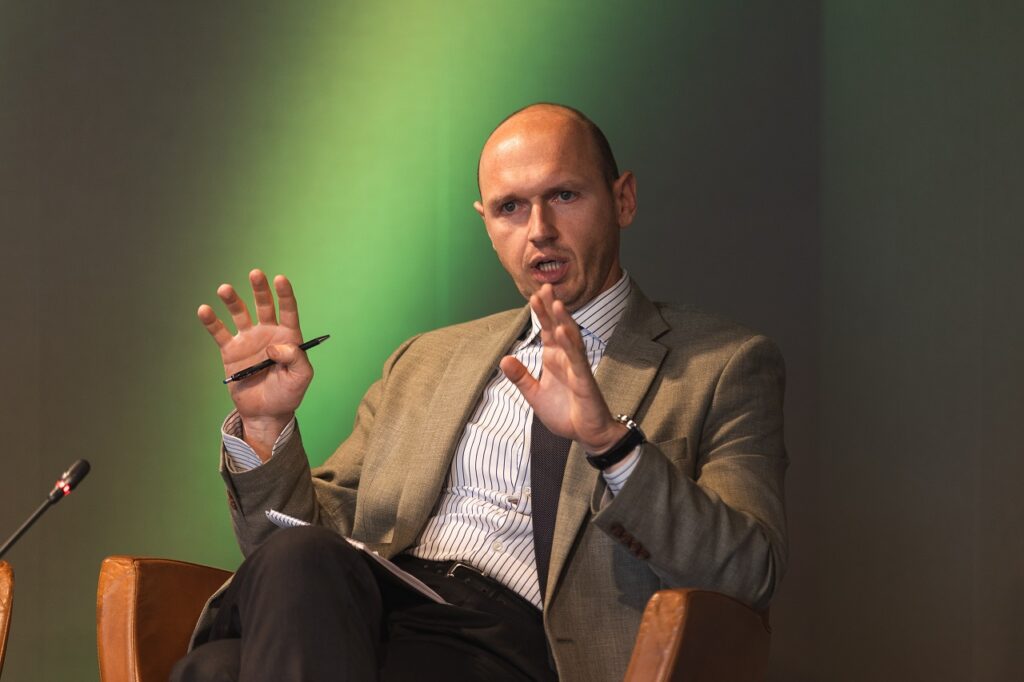 The Executive director of the Albanian Institute for International Studies (AIIS), Alba Cela, stated that the topic of the Open Balkans divides public opinion.

“Support will always be primarily for the Berlin process, I understand that the signatories of the Open Balkans will say that both initiatives are good and that one does not exclude the other. However, there is tension between those two initiatives“, believes Cela.

According to her, there are advocates in Albania, but also those who are worried about this initiative. “Let’s not treat the parties as if they were monolithic. There are variations in positions and opinions on this topic”, said Cela.

She said that when the Berlin process is revitalized, she expects the debate on the tension between these two initiatives to intensify, but that she does not expect anyone to withdraw from the Berlin process, as that would have a great political cost.

Concluding the conference, SOG Vice President Gudrun Steinacker stated that her initial scepticism about the Open Balkans initiative is not eliminated. “I am not sure that the Open Balkans contributes to regional cooperation or leads countries to economic prosperity, the rule of law and a truly united Europe,” said Steinacker. She expressed hope that the next two years will witness a step forward when it comes to the EU enlargement process.

The director of the FES office for Serbia and Montenegro, Kirsten Schoenefeld, said that EU integration should be promoted, expressing the hope that the revitalization of the Berlin process will be an additional impetus to that process. As she pointed out, all regional initiatives must be inclusive and coherent. “We have to continue discussing this in the coming years. I hope that the Berlin process will speed up European integration“, said Schoenefeld.

The Executive Director of CCE, Daliborka Uljarević, closing the conference, said that this issue must be discussed in an argument-based and responsible manner before making decisions on possible accession to the Open Balkans.

“We heard a lot of opinions today, and the unquestionable conclusion is that we should stick to the foreign policy direction that has been trodden until now, and above all, the EU accession. In that context, with all the diversity of the countries of the region, it is unlikely that the Open Balkans initiative can bring benefits to Montenegro“, said Uljarević.

“I hope that the debate will start soon, we heard from the Deputy Prime Minister (Jovana Marović) – that the analysis will be published soon, we are impatient to see the official position of the Government and whether the Government can be united concerning this issue“, concluded Uljarević.