Montenegro should strictly adhere to the standards and practices leading towards the  European Union (EU), and as for other initiatives outside the Berlin process, such as the Open Balkans, must remain cautious, it was assessed at the first part of the conference “Regional initiatives in the Western Balkans – Chances and Pitfalls?”, organized by the Centre for Civic Education (CCE) with the German organizations Südosteuropa-Gesellschaft e.V. (SOG) and the Friedrich Ebert Stiftung (FES). 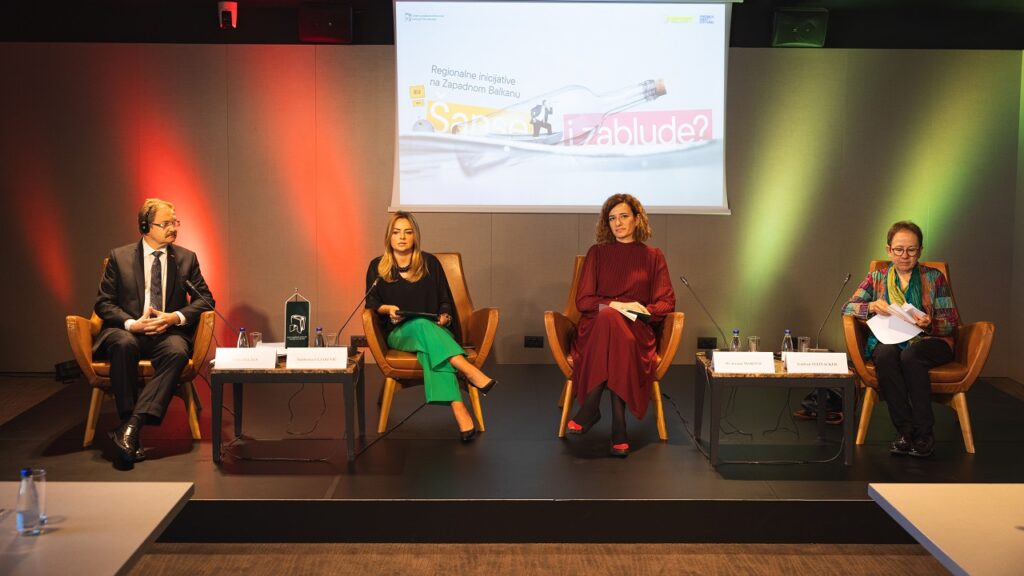 The Executive director of the CCE, Daliborka Uljarević, said that the Montenegrin government must focus on what is one of the priorities of foreign policy, namely EU accession.

“Deviating from that path, with initiatives like the Open Balkans or some other topics that absolutely shift the focus from European integration, affects synergy, creates confusion that undoubtedly pulls us back, not forward”, said Uljarević.

She emphasized the importance of the EU and its member states, especially Germany, to continue with unreserved support for the Berlin Process and advocate the enlargement policy more strongly. According to her, the EU’s insufficient focus on the Western Balkans in recent years, combined with the strengthening of authoritarian actors in the region, opened up space for mutual linking of those non-democratic actors through different, seemingly receptive, packing the story of regional cooperation.

“However, there is no sustainable regional cooperation that is not based on values and that does not lead us towards the EU. In the public interest, there cannot be initiatives that should strengthen the aspirations of individual and transitory Balkan leaders. Numerous warnings that the Open Balkans initiative may have a dangerous potential to divert or slow down Montenegro’s EU accession process should not be dismissed lightly, because it can have far-reaching consequences“, added Uljarević. 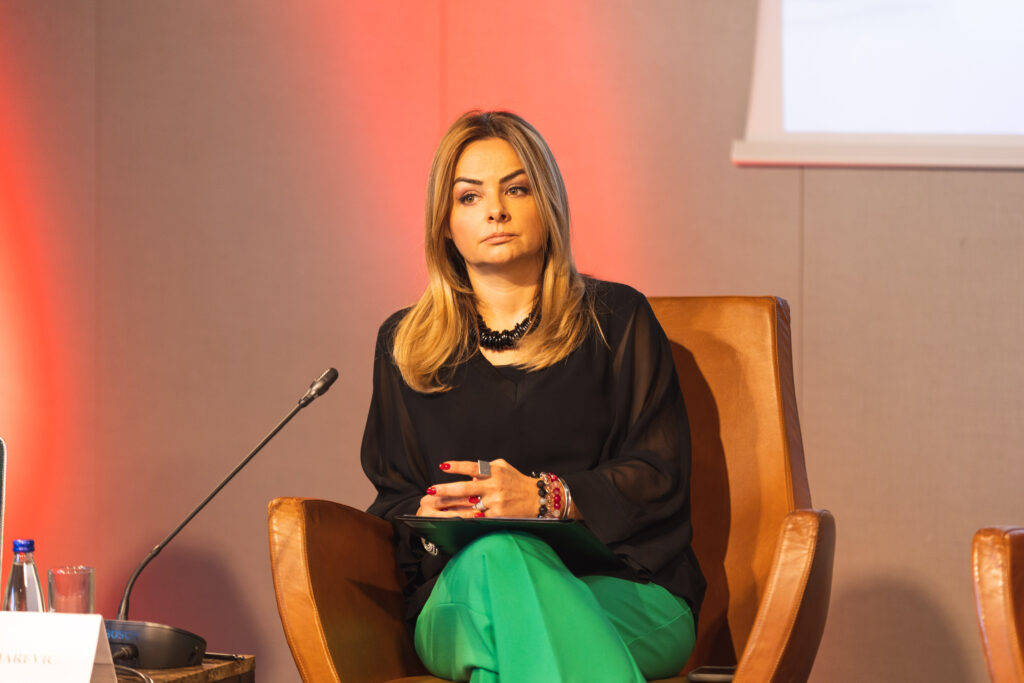 She warned that the Government in the caretaker capacity has no legitimacy to make important strategic decisions, such as joining the Open Balkans initiative, although it is obvious that this is not a “burden” neither to the Prime Minister nor to many members of the Government, although they had accused the former PM Zdravko Krivokapić for the same approach. “This demonstrates double standards, but also a misunderstanding of democratic rules. Any attempt to commit on behalf of Montenegro would represent a violation of democratic practices by the Government in the caretaker capacity“, said Uljarević.

The Open Balkans, as she claims, is not tied to any EU standard, and the concept of the rule of law is not the common denominator of that process, nor can the EU monitor it in the context of the enlargement policy. “The question is if the Open Balkans is an open abandonment of the process of European integration. If it is, then it would be fair that political leaders openly tell that to the citizens, and not mislead the public by sitting on the two chairs. Montenegro should not be a hostage to undefined policies in relation to global events, and this initiative is integration based on such values where the smallest ones, like Montenegro, suffer in the game of large regional actors“, stated Uljarević.

The Deputy Prime Minister and Minister of European Affairs, Jovana Marović, said that the Ministry she leads, started the whole story about the need for more information about the Open Balkans, as well as an analysis of the advantages and disadvantages of the Open Balkans at a certain moment.

Marović stated that the Ministry prepared an analysis from the aspect of the European integration process and how the Open Balkans matches or does not match with our goals of becoming a member of the EU, with the announcement that the analysis will be published soon. 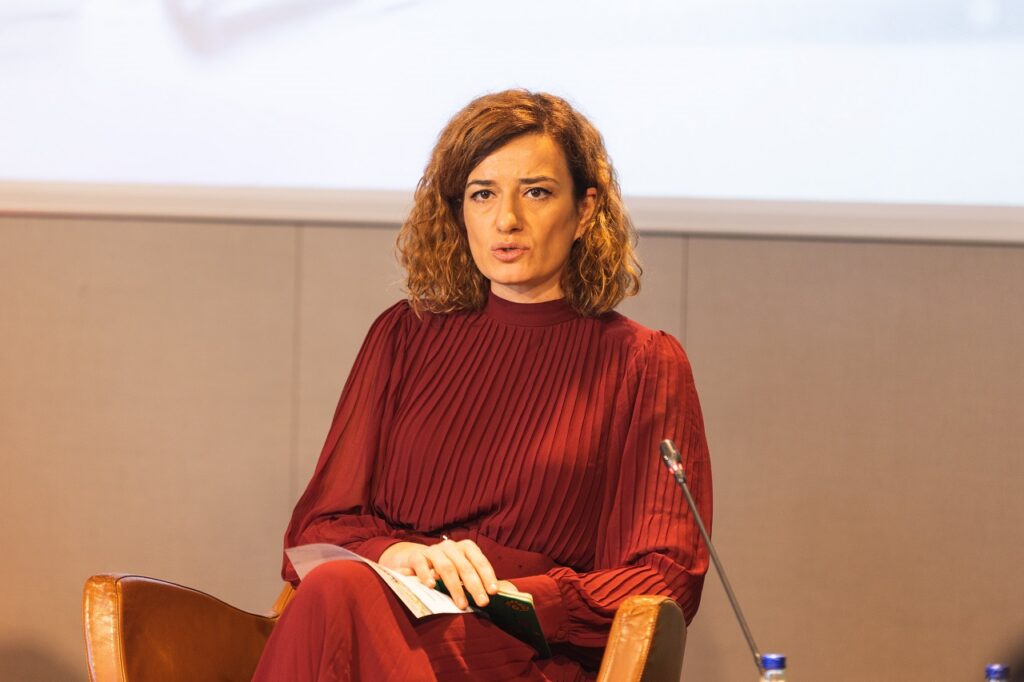 “This is just the beginning of the process of dialogue and analysis of the Open Balkans,” Marović added.

She recalled that the Open Balkans initiative originated in 2019 from the three countries of the Western Balkans, which was, in some way, the result of their frustration, because at that moment two of these three were blocked in the process of European integration “This whole initiative was approached on ad hoc basis“, stated Marović.

According to her, the agreements concluded within the framework of the Open Balkans largely coincide with what exists within the framework of the Common Regional Market, launched in 2017. “The question arises: is it necessary to insist on two parallel processes in which six i.e three countries participate? The umbrella initiative should be the Common Regional Market”, Marović said, adding that the Open Balkans also has certain advantages.

The German ambassador to Montenegro, Peter Felten, said that the German government wants Montenegro to join the EU as soon as possible. He stated that the Common Regional Market is a key element for the empowerment and inclusive inclusion of the Western Balkans and an important mechanism that will bring all countries into the EU. 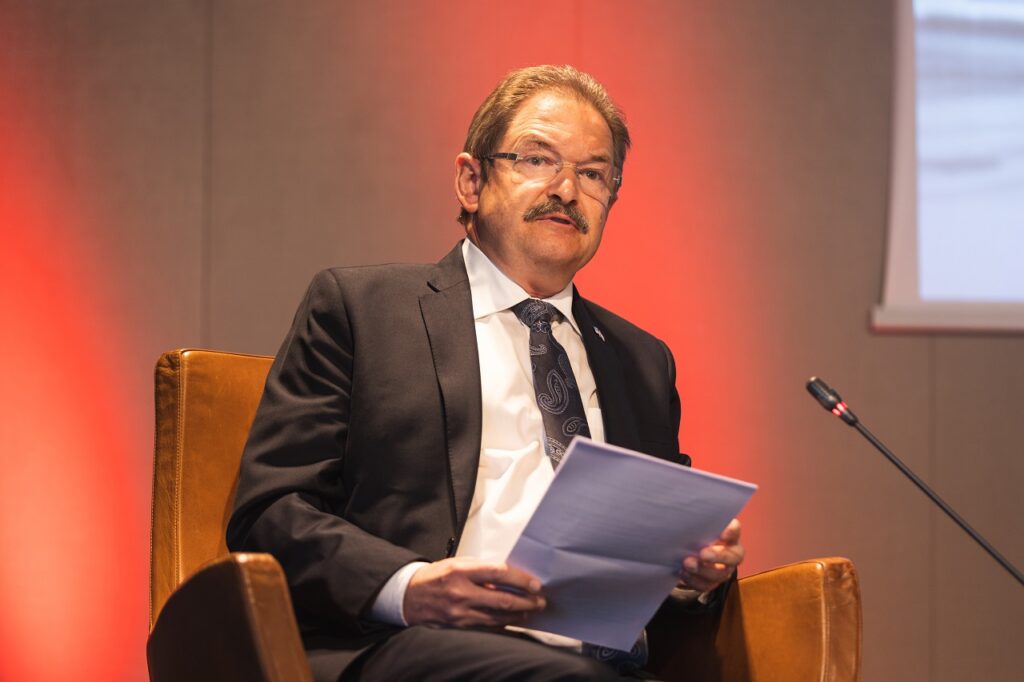 “Common regional market is based on EU legislation”, Felten added, stating that the benefits of this mechanism are enormous when all countries participate.

Felten also said that the German government is doing its best to dynamize the Berlin process and demonstrate its benefits for all six countries of the Western Balkans.

The Vice-president of the Society for Southeast Europe (SOG) from Germany, Gudrun Steinacker, said that there is a lot of confusion in various initiatives and regional cooperation in general. “Regional cooperation is key for the development of the entire region, but also for the accession of countries that are not currently members of the EU to that bloc“, said Steinacker.

Some regional initiatives, as she stated, did not have the desired impact so far, as people want to see tangible results. Steinacker said that governments make a lot of promises that are not followed by implementation, stating that civil society organizations must be better involved in political processes in the context of regional initiatives, specifically the Berlin process. “There should be some kind of obligation that civil society organizations are involved in the process of making important decisions”, said Steinacker. 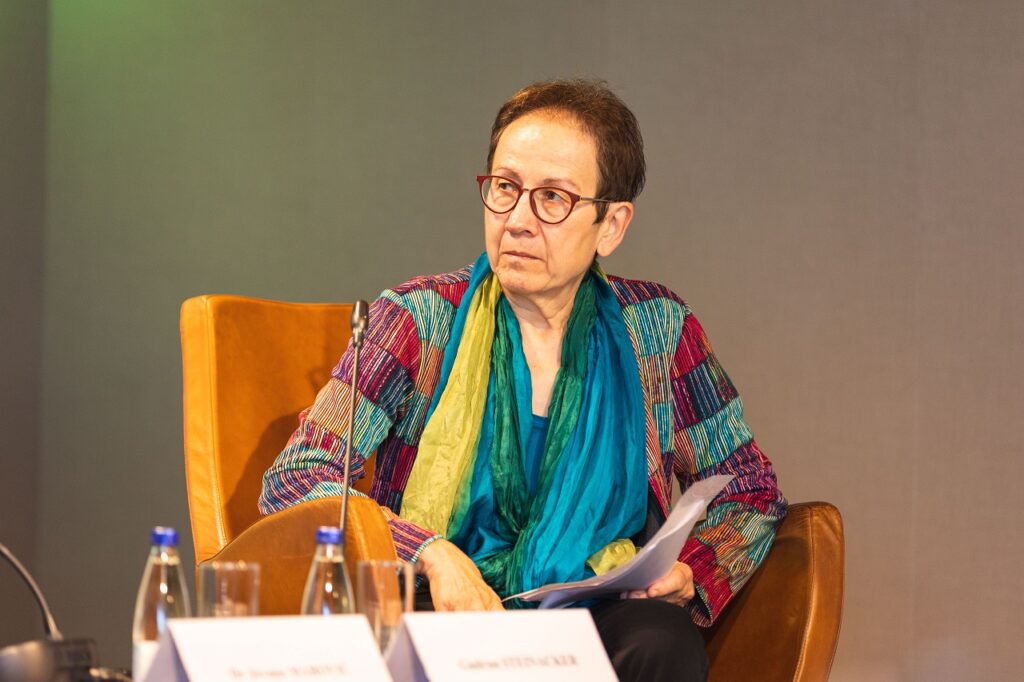 As part of the conference, the panel “Open Balkans – costs and benefits for Montenegro” was held, at which the Vice-President of the Montenegrin Government and Minister of Agriculture, Forestry and Water Management, Vladimir Joković, stated that the Open Balkans, signed by three countries so far, does not deal with political issues at all. “This is purely about economic issues and the fact that there is an easier flow of people, goods and capital, and in all documents that are signed is emphasized the faster entry of the countries of the region into the EU”, said Joković.

According to him, all those who say that the Open Balkans is counterproductive to any country’s path towards the EU have the wrong approach, either tendentious or they are uninformed. “The Open Balkans is not a brake on any other process, it is complementary to everything that is happening and it is adapted to the economic interest because it allows the flow of goods, people and capital without any problems. Also, there would be a unique identification document for citizens to cross borders more quickly, as well as great support and agreements regarding joint action in response to natural disasters”, added Joković.

As he stated, the Open Balkans is also focused on cooperation in tourism, where joint performances and programmes for the arrival of tourists to the region can be developed. “Montenegro should be part of the Open Balkans, not because of anyone’s interests, but because of citizens and companies. Strategic interest should be the path to the EU, but we cannot neglect something that would facilitate the flow of people and capital and bring benefits to economies“, said Joković and added that we should discuss the details and approach from that side, and not with the too broad elaboration that does not address the essence. 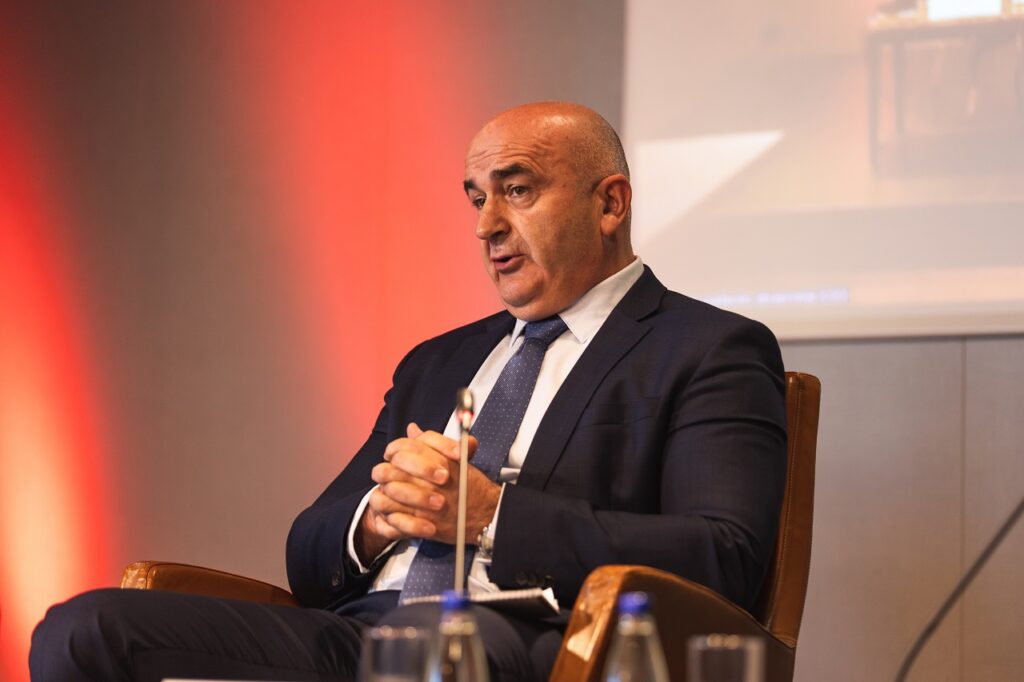 The founder of the Centre for Economic and European Studies (CEES) from Montenegro, Nina Vujošević, referred to the legal framework when it comes to regional initiatives and reminded that Montenegro signed and ratified the CEFTA agreement in 2007, as the basis on which regional integrations function. According to that agreement, Montenegro is a free trade zone and cooperates with six other countries within CEFTA and conducts its own economic policy. “It is very important that these levels or forms of economic integrations are different. Being in the free trade zone is not the same as being part of the EU single market or the Open Balkans”, explained Vujošević.

“Our strategic and official goal is EU membership, and we must be complementary to it in all our activities”, said Vujošević. Hence, she believes, it is important to implement all activities within the existing mechanisms – CEFTA and others within the Berlin process and to have an institutional framework.

“With the Open Balkans, it is not clear what the institutional framework is that would help in monitoring of all activities and what it would bring new to Montenegro, apart from the costs and distraction of the administration from the process of European integration“, said Vujošević. 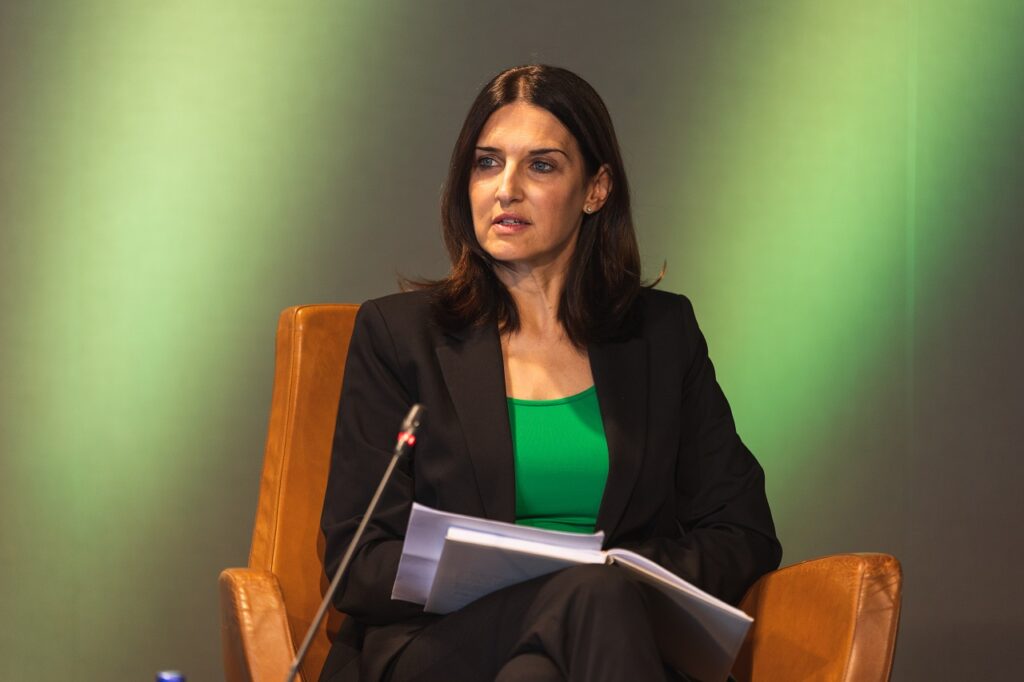 She welcomed the fact that regional cooperation continues, which is extremely good within the criteria and mechanisms of CEFTA and the Berlin Process, so in this sense, it is beneficial for us to be better prepared for negotiations with the EU.

Member of the Bundestag, Josip Juratović, disagreed with Joković that the Open Balkans does not deal with political issues, stating that regional initiatives are always political issues. “The new name is used for old goals that did not succeed”, said Juratović.

When asked what he would recommend to Montenegro regarding how to position itself according to the Open Balkans initiative, Juratović replied that there is an internal political problem in Montenegro caused by a certain fear of Serbian domination.

“Caution is now logical. I think it would be best for Montenegro to stick to the agenda of joining the EU. Part of that is CEFTA and the Berlin process“, said Juratović. 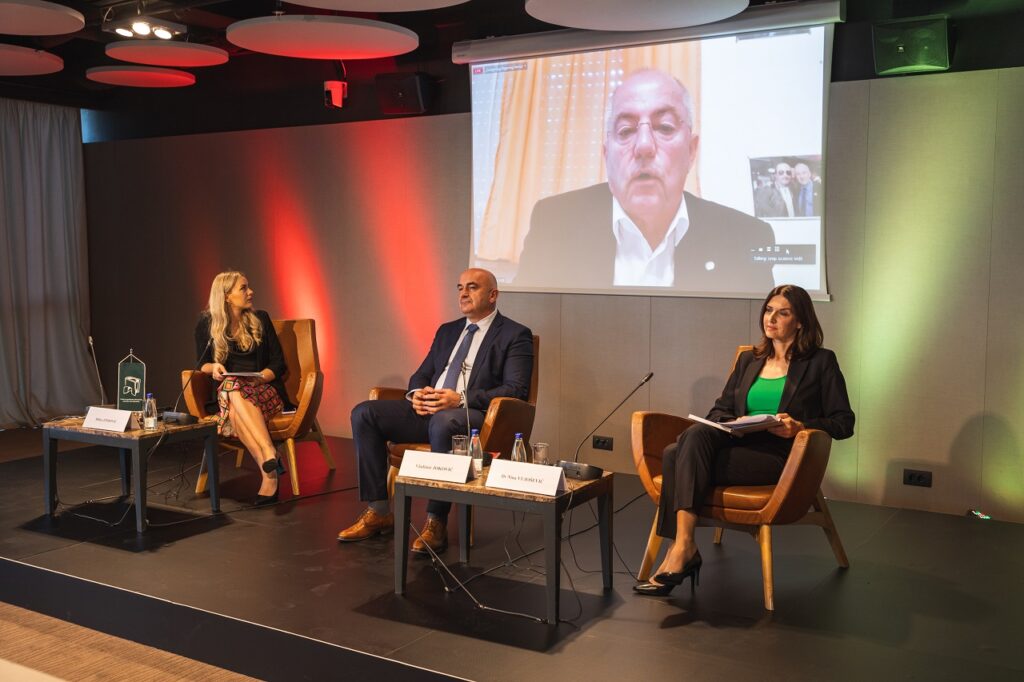 He believes that it is important to create trust in the region and work on issues of reconciliation. “We need to understand that everything is politics, and the flow of goods and people, because it is all connected to political decisions and frameworks. Montenegro should strictly adhere to the line and standards that lead to the EU, and as for other projects, it can be open, but with caution,” stated Juratović.

He said that he sees the future of the region in the EU and that it is important that everything takes place within those frameworks that are a safe path to the Union.

Edward P. Joseph, lecturer and senior research fellow at the Johns Hopkins University Foreign Policy Institute from the United States of America (USA), believes that the Open Balkans is a good initiative if one believes that economic power does not affect political power, that the adoption of European standards is less important, or that foreign investors only believe in the size of the market and not in corruption.

“Economic power is political power. I speak from the perspective of the USA as a global power,” said Joseph. 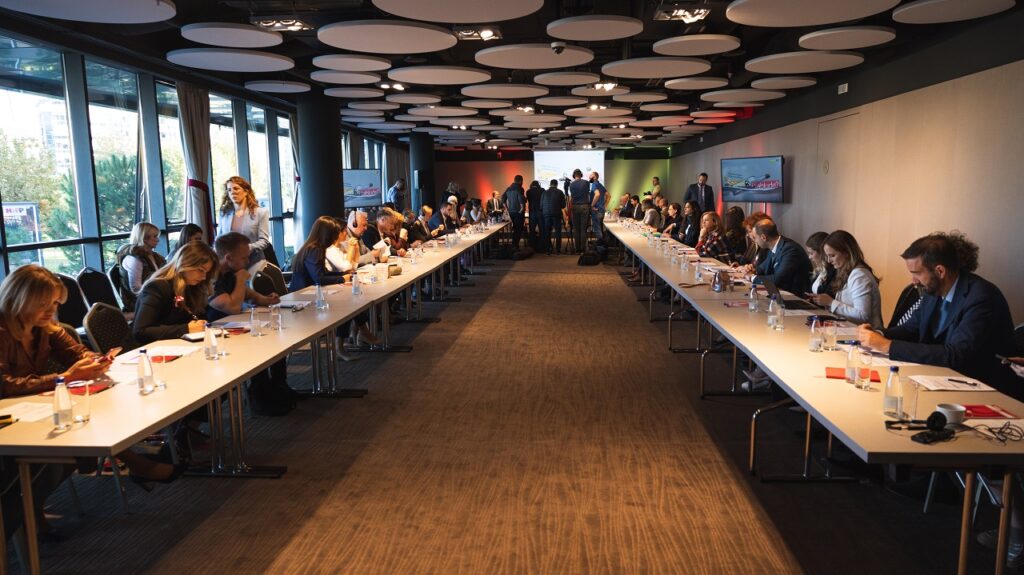 He pointed out that the six countries of the Western Balkans are not the same size, and that there are unbalanced economies and unbalanced trades. “This is why it is so important to push the common market through the EU accession process and bring the Berlin process into focus”, concluded Joseph.