Centre for Civic Education (CCE) points to the worrying continuation of the production of Luča diplomas, which are disproportionate to the real quality of education in Montenegro, as been warned for long time by the completely opposite data from the PISA test.

According to the data obtained by the CCE, in accordance with the Law on Free Access to Information, in the last five school years, 5,165 Luča diplomas were awarded in primary schools and 5,005 Luča A and B diplomas in secondary schools. The annual percentage for primary schools varied from 13.58%, which was noted in the 2017/18 school year, to 15.72%, in the 2020/21 school year. These percentages also vary by municipality, with the above-average number mostly in Andrijevica, Berane, Rožaje, Podgorica and Plav. In Andrijevica, this usually reached over a quarter of the 9th grade students who received this diploma.

An even more pronounced tendency for the growth of these diplomas is in secondary schools, where this figure rose from 15.11% in 2017/18 to as much as 20.36% in the 2021/22 school year. In this category too, there are significant differences between municipalities, with Andrijevica, Berane, Rožaje, Budva and Tuzi leading the way. It is interesting that in Tuzi, that number has been twice as high as the average in recent years, and in the 2021/22 school year, a record 55% of fourth grade students received a Luča A or B diploma.

Šavnik is the only municipality that did not have students with this diploma in three of the last five school years.

On the other hand, Montenegro ranked 52nd in the PISA test conducted in 2018, and in all three categories – reading, mathematics, and science – it is below the average of OECD countries. As during the testing in 2015, it was confirmed that almost every other student in Montenegro is functionally illiterate. The research was conducted in 78 countries, and the best placed European country, in fifth place, is Estonia. Of the countries of the former Yugoslavia, Bosnia and Herzegovina (62), North Macedonia (67) and Kosovo (75) are ranked lower than Montenegro. Slovenia took 21st place with results above the OECD average, while Croatia (29) and Serbia (45) are below the OECD average.

For years, CCE has been pointing to the devastating effects of the neglect of the educational system, which, by all authorities until now, has been used on a large scale to feed party infrastructures, which further collapses that system and limits its qualitative transformation. The “printing” of Luča diplomas, that is, the fictitious production of “distinguished students” behind which there is no knowledge, only sweeps the essential problems in the education system under the carpet. 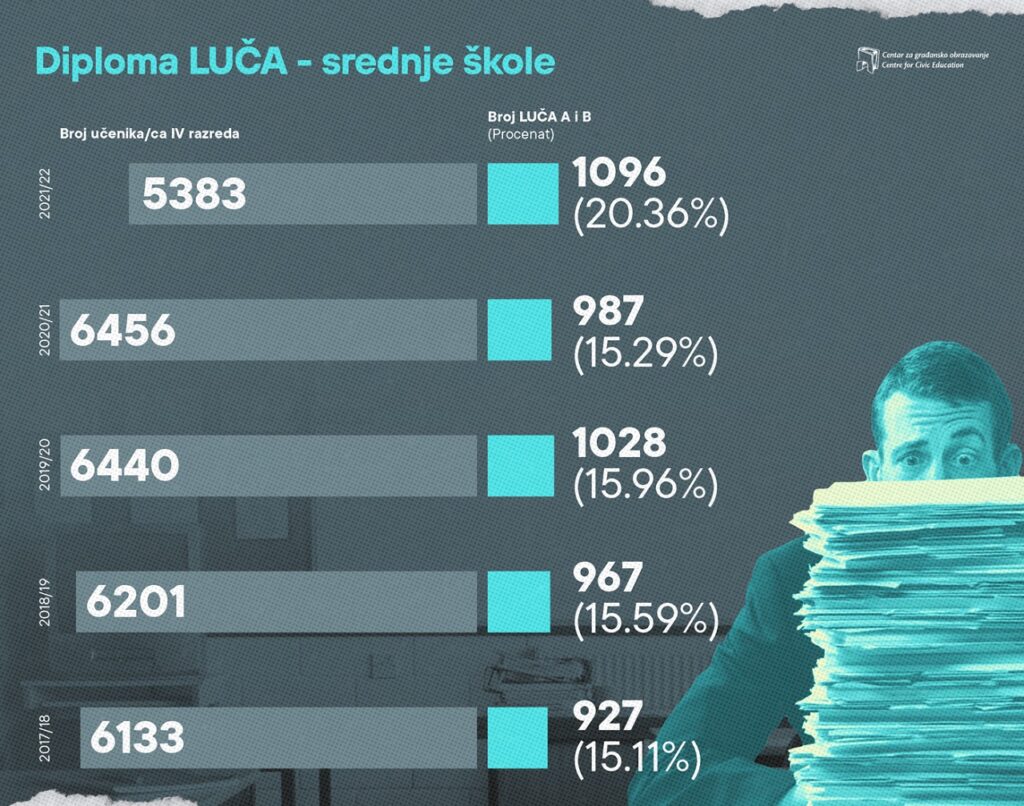 Therefore, CCE assesses that it is time for the Educational Inspection and the Ministry of Education to start the process of reviewing the quality of these diplomas by comparing the grades of the overall schooling, the results from competitions and the number of absences of those students during schooling, especially from scheduled written exams and quizzes, as well as other activities during education with the given diplomas in order to determine their validity. It is clear that the data in some municipalities raises doubts whether it really is about the real performance of student success, and it is also common knowledge that excellent grades and this diploma are being forced for the sake of the benefits it brings when enrolling in a university, receiving scholarships, etc.

CCE believes that there is a way to stop fake grading and to establish a system where really the best get this diploma. And the best make up, considering the progress of society, science and technology, realistically up to 10% of the school population or less, which further confirms the degradation of the Luča diploma.