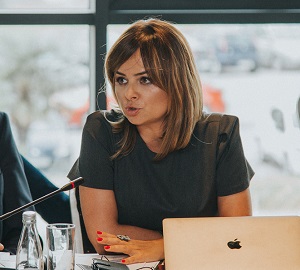 Daliborka Uljarević graduated at the Faculty of Political Sciences, Department of International Relations at the University of Belgrade, attended postgraduate studies in European and East European Studies at the University of Montenegro and currently pursues her MA at the Law Faculty. She specialised Local Government and Civic Society at the Theodor Heuss Academy (Germany), Comparative Media Law and Policies at the University of Oxford (UK), Regional Cooperation and European Integration at the University of Split (COIMBRA programme), Political and Economic Systems in the organisation of Charles University and Georgetown University (Czech Republic), and Democracy, Human Rights and Conflict Management at the Nansen Academy (Norway). Within the European Marshall Memorial Fellowship, intended for European students (GMF), she studied in USA, as the first participant of this programme from Montenegro. Through additional study visits she was in Poland, Belgium, Netherlands, Hungary, Slovenia, France, Armenia, Austria, Latvia, Ukraine, Cyprus, Turkey and Jordan. She passed through a number of alternative education programmes in the field of organisational capacity building and democratic leadership. As expert, she is frequently engaged in various programmes led by UNDP, EURECNA, OSCE, UNIFEM, Sida, REC, ECOSOC, Freedom House, etc. From 2001 until 2005 she was working as Political and Media Adviser in the Council of Europe Office in Montenegro. She was one of the founders and director of Nansen Dialogue Centre in Montenegro (until 2002). During 1999 and 2000, she worked for BBC World as a local producer. Before that, she worked in the OSCE Mission in Montenegro and in International Foundation for Election Systems from Washington, in Serbia and Montenegro. During her studies, she was active participant and spokesperson of the Student protest 96/97 in Belgrade. In Montenegro, she is member of the Executive Board of the Centre for Development of NGOs and Institute Alternative, and used to be member of the Executive Board of the NGO Coalition “Through Cooperation to the Aim”. At the regional level, she is member of the Western Balkans Advisory Committee of the global Open Society Foundations (OSF), the Western Balkans Strategy Group of the Heinrich Boell Stiftung, within the Coalition for RECOM she is member of the Regional Council, and she is a member of the Advisory Board of the Gay Straight Alliance based in Belgrade. From 2012 to 2016 she was a member of the Anti-Discrimination Council of the Government of Montenegro. She is a co-author of publications Value orientations and levels of social activism of students in Montenegro; 21 Story on Democracy; Learn about the European Union; Civil Society Index for Montenegro – Weak Tradition, Uncertain Future; How to mainstream the gender dimension in constitutions (a comparative study of the case studies in selected constitutions); Public Administration in Montenegro: salary schemes, rewards system and opportunities for professional advancement in law and practice; No more no less, equal rights for all – an analysis of the position of LGBT people in the Montenegrin society; Women in politics – the overview of best European policies and practices to empower women for political participation, including the impact of quotas; Europe in my city – civil society, local government, citizens – the role and place in the European integration process, citizens’ attitudes and perceptions about the integration processes; Europe in my town – what are we negotiating about and what do negotiations with the EU bring us; Let’s clean the corruption: start from your own street; Short Guide through Legislative and Institutional Protection of Human Rights in Montenegro; Academic honour the Montenegrin way – Plagiarism in Montenegro and the failure to sanction them; University Walls – analyses of transparency of the functioning of higher education institutions in Montenegro; Controlled Chaos in Regulation of Electronic Media – work of the Agency for Electronic Media; Fourth Estate Conscience – self-regulation of media in Montenegro, as well as editor of numerous publications in the area of democracy, human rights and European integration.  Fluent in English and French, with solid knowledge of Italian, and used to learn Farsi.