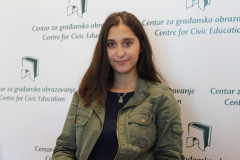 Dina Abazovic is a third-year student of Department of International Economics, Finance and Business at the University of Donja Gorica (UDG). She graduated from “Niko Rolovic” gymnasium in Bar as valedictorian. During high school, she received A-SMYLE scholarship through State Department’s ECA programme and spent one year in US high school. In high school, she initiated and conducted numerous projects and was president of Pupils’ parliament in Bar, whereas in US she took part in music and drama sections, contributed to high school’s papers and yearbook, and received award for the outstanding voluntary work. She completed Human Rights School organized by the Centre for Civic education (CCE). Furthermore, she participated at the conferences, seminars, and workshops related to economics, law, anthropology, social entrepreneurship, active citizens and alternative manners of expressing through art. She was also volunteer at the American Councils in Podgorica and participant of their City Representatives program through which she implemented youth projects in her hometown Bar. Additionally, she organized Civic Education Week that gathered high school pupils from all over Montenegro offering them the opportunity to visit governmental and non-governmental institutions and hence get familiar with their work. Based on these achievements, she was invited by the American Councils for International Education to participate in the Civic Education Week in Washington DC in the capacity of alumni mentor. She is member of the Steering Committee of MAYAA (Montenegrin American Youth Alumni Association), as well as Students Business Club at the UDG. In 2018, with her team, she won the “Ideas and Character” competition held at the UDG. Independently, she conducted series of workshops sharing knowledge gained throughout student exchanges, and she is also permanent member of theater group “Sinhro” from Podgorica. Fluent in English, Spanish and Italian.