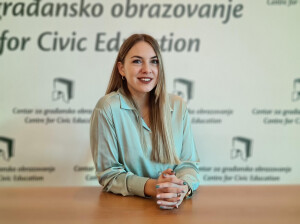 Milica Zindović graduated in International Relations at the Faculty of Political Science of the University of Montenegro (UoM). She spent one semester of undergraduate studies at the Jagiellonian University in Kraków, through the CEEPUS exchange program, expanding her knowledge of international and European studies. She holds a master’s degree from the Pompeu Fabra University in Barcelona, ​​on the topic of Construction and Linguistic Portrayal of the Climate Change Phenomenon in the Radical Right-Wing Populist Parties‘ political discourse. As an EMJMD (Erasmus Mundus Joint Master Degrees) scholarship holder, she completed her Master’s degree in European Politics and Society, thus, developing herself academically at three universities – Charles University in Prague, Leiden University in the Netherlands and Pompeu Fabra University. She is the winner of the award of the University of Montenegro for the best student of the Faculty of Political Sciences in the academic year 2017/18; the student award of the Montenegrin Academy of Sciences and Arts (CANU), as well as the UoM student award with a given plaque for completed undergraduate studies with best grades in the field of social sciences and humanities. She was also awarded several scholarships from the Municipality of Pljevlja, as well as the Ministry of Education of Montenegro. She began her professional engagement in the CCE via internship and later on via vocational training. Milica completed the Democracy School organized by the Friedrich-Ebert Stiftung, the Center for International Relations Banja Luka and the Center for International Studies Zagreb, as well as the EU Accession Negotiation School, organized by the CCE. She was a participant in the Education Programme for acquiring a professional qualification for a youth activist, organized by the Center for Vocational Education and Forum MNE. Moreover, she successfully completed the European Union and Legal Reform Summer School 2019, and has participated in numerous seminars and conferences, some of which include GLOBSEC Bratislava Forum 2019, 7th Western Balkans Civil Society Forum, Forum 2000, etc. During her studies in Montenegro, she was an active member of MAPSS (Montenegrin Association of Political Science Students), where she worked on various projects, such as Diplomatic Course, Ambassadorial Days, Simulation of work of European Council, Simulation of Parliamentary Practice, and was also one of the coordinators of Videodrome. Fluent in English and Spanish, with basic knowledge of Russian and Italian.