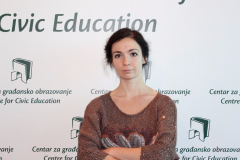 Vera Šćepanović got her PhD in Political Sciences, with specialisation in Political Economy at Central European University in Budapest, with a doctoral thesis on the role of foreign investment in the process of economic development and European integration of the countries of Central Europe. She completed her MA studies at the same university. She graduated in Social Sciences at the University in Utreht, and finished high school at the United World College in India. She also attended European Integration School, organised by the CCE, CDNGOs and EMiM, with support of FOSI ROM, as one of the best participants in her group, and Diplomatic Academy „Gavro Vuković“ at the Law Faculty of the University of Montenegro. She has extensive theatre experience, as well as a working background as a journalist. She worked as a volunteer in NGO Sadhana and UWC Mahindra in India, as well as in the Centre for Asylum seekers in Netherlands.In the last few years she has actively cooperated in several international research projects on the transformation of the European Economic Area, the labor market, employment relations and social policy reform in Europe, including cooperation with the European Union Fund for the improvement of living and working in Dublin (EUROFOUND). She is a member of the Executive Board of the Institute Alternative, as well as the editorial boards of several publications and the editorial board of the European pulse. She is a co-author of publication Europe in my town – what are we negotiating about and what do negotiations with the EU bring us. She is fluent in English and French, and has solid knowledge of Spanish, Italian and Hungarian language.