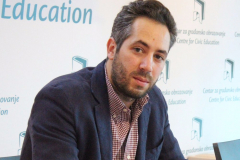 Vladimir Vučković obtained PhD at the Department of International Relations and European Studies at the Faculty of Social Studies of the Masaryk University in Brno, Czech Republic. During the doctoral studies, he was working as assistant at the master programme at the same faculty. Also, he was visiting PhD – scholar of Swedish Institute at the Department of Political Science of the University of Stockholm. He completed master studies in political sciences at the Faculty of Political Sciences of the University of Belgrade where he had previously graduated international relations. He was visiting student at the Faculty of Political Sciences of the University of Zagreb, scholar of the CEEPUS foundation and the first Montenegrin winner of the scholarship Ballas Balint, initiated by Tibor Navracsics, Deputy Prime Minister and Minister of Public Administration and Justice of Hungary, which included three months of professional training within the Ministry Public Administration and Justice of Hungary (Cabinet of Minister and Deputy Prime Minister). Moreover, he is holder of JoinEU-SEE PENTA scholarship within Erasmus Mundus programme for four-year doctoral studies. He is member of the Copernicus Graduate School (CGS), international community of doctoral students based in Torun (Poland) and the Swedish Institute (SI) Network for Future Global Leaders (NFGL). His research interest is primarily oriented towards areas of Europeanization of the Western Balkans, EU enlargement policy, European integration process of post-Yugoslav space, foreign policy of the Western Balkans and NATO enlargement policy. His scientific articles The Europeanization of Political Parties in Montenegro, Partnership for a Secure Future: Montenegrin Road to NATO from 2006 to 2015 and Loose and shallow Europeanization of the Western Balkans: Corruption in Montenegro and Serbia, were published in the prestigious international scientific journals, such as Romanian Journal of European Affairs, Journal of Slavic Military Studies and STRATPOL-Strategic Policy Institute. He is author of articles in the area of democracy and European integration and co-author of publications: EU – 28 Watch Case study: Montenegro; How much managers within the state administration bodies earned in 2012; Elections and electoral programmes 2012 – essence or form?; Eroding Freedoms: Media and Soft Censorship in Montenegro; What kind of Government Organization for Montenegro? – comparative analysis and recommendation for a new approach; Europeanization of election manifestos in Montenegro: To which extent political parties acknowledges European values; Elections and Ethical Principles – proposal for the improvement of ethical approach of bodies in charge of the conduct of elections in Montenegro. He is currently preparing his first book titled Europeanization of the Western Balkans, which will be publicized by Peter Lang publishing house in 2019. Fluent in English and Czech, with good knowledge of Italian language.