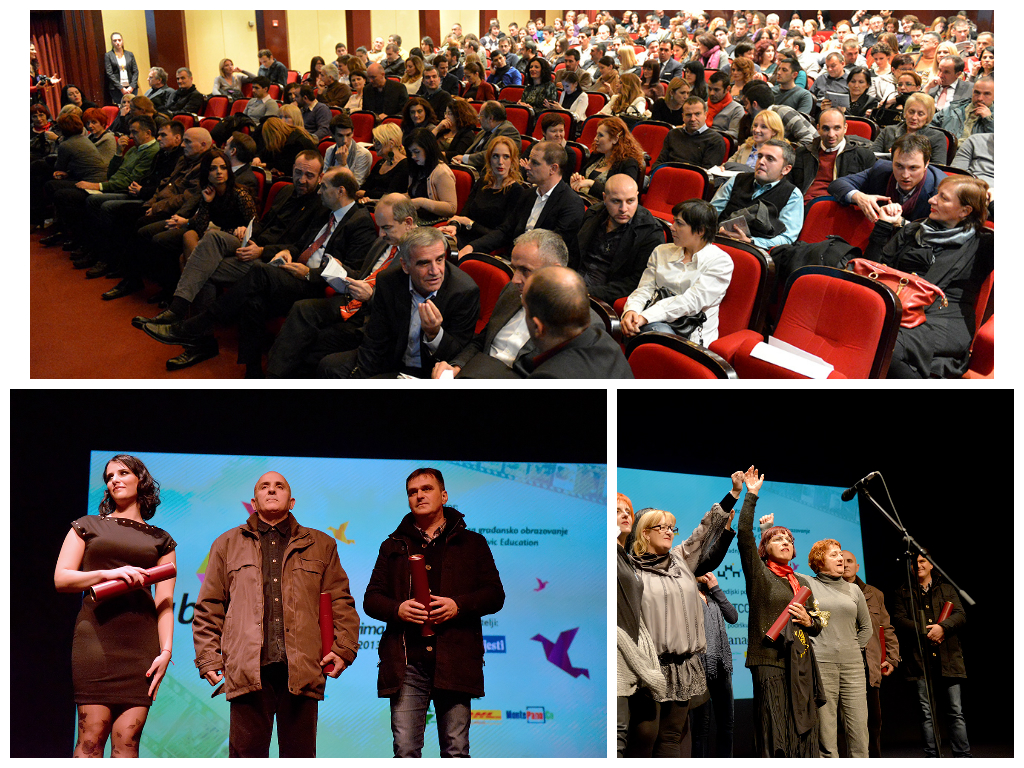 Mr Janko Ljumović said that the Human Rights Film Festival represents an example of good practice in which we “inter-sectionally connect, assembled to promote human rights through the art of film”. He assessed that “theatre is the right place for a Fast Forward Human Rights Film Festival, which, starting tonight, offers the audience a selection of movies that I am sure is going to be a new motivation for us to act in the direction of constantly challenging the emancipation”. Furthermore, “Images and words that will enrich our experience will be joined with all the pictures and words that live on our stage. Therefore, I express my gratitude to the team of the Centre for Civic Education, which has launched the Fast Forward Human Rights Film Festival, and I extend the gratitude for the initiative to offer together those films to public, which from year to year show a distinctive artistic and cinematic writing that testifies how much the topic of human rights is important and necessary.”

Ms Daliborka Uljarević welcomed everyone emphasizing that this year’s selection includes 10 great movies of the latest production that have already collected numerous nominations, awards and prizes worldwide. «These films are confronting us, through powerful artistic vision, with our own boundaries in thinking of humanity, drawing attention to some of the most current human-rights’ issues in Montenegro. » said Ms Uljarević. She referred to the development of the festival, «Fast Forward Human Rights Film Festival began as a modest initiative of the Centre for Civic Education, with the intent to bring the corpus of human rights and freedoms, in a different manner, closer to the citizens of the Montenegrin society. Therefore our name of the Festival is also a voice of hope and expression of warning that human rights and fundamental freedoms, their respect and protection, are a goal that we, as a society and individuals, should strive for. FAST FORWARD is a trademark of the Festival designed as a message, as a counter-attitude of resistance to the process of democratization and Europeanization of the Montenegrin society. Negotiation chapters are being opened, and walking through them, as well as the negotiations themselves are nothing else but opening our society to diversity and to the full protection of human rights and freedoms. » she also thanked everyone who worked on the implementation of this year’s edition.

Afterwards, she presented the winners of the newly established award of the CCE for the affirmation of human rights and civic activism in Montenegro – Mr. Goran Stanković and Mr. Tufik Softić in the category of outstanding individuals and NGO Centre for Women and Peace Education ANIMA in the category of outstanding organizations (detailed explanation in Appendix 1), expressing the hope that precisely they or their examples will be an inspiration also for development of Montenegrin human rights film.

Before the screening of the film – The Act of Killing, director Joshua Oppenheimer addressed the audience via video link. Director welcomed the audience and while talking about his film, he said that the entire film tradition is predominantly oriented towards films that glorify the struggle between good and evil. The Act of Killing is a film that speaks about it, but I hope that this is also a film about what means to be human, what means to have the past and how we create our worlds through stories, and lie to ourselves to justify our actions and avoid bitter and painful truths”, emphasized Oppenheimer while addressing the audience in Podgorica.

The Act of Killing had, in addition to appearing on the festival Fast Forward, projections at around 150 festivals worldwide, in one year. The film won over 30 prestigious awards, among which the most important for now certainly is the 2013 European Film Academy Awards – the award for best European documentary in 2013, and there are, among others, also the award for best European documentary 2013 Berlin Film Festival – Panorama Audience Award / (2013 Panorama audience Award), 2013 Berlin Film Festival – Award of the ecumenical Jury / (2013 Ecumenical Jury Award), 2013 Istanbul-Award of the jury SIYAD (Turkish Film critics’ Association) / (2013 Award of the Association of Turkish Film Critics).

Opening of the Festival was attended by many guests from different spheres of social life, but also the audience who came attracted by the theme of this unique Festival in Montenegro.

Fast Forward Human Rights Film Festival, the first and only one of its kind in Montenegro, aims to contribute, through the film, to raising awareness of citizens about the importance of human rights and their protection and improvement, as well as to the value framework that encourages harmonious relations among those who are different in any grounds.