Yesterday, within the project Corruption on the local level – zero tolerance!, Centre for Civic Education (CCE) in cooperation with Institute Alternative (IA), NGO Bonum and NGO NADA organized a panel discussion in Kotor under the title “Performance and Ability of Local Parliaments”. 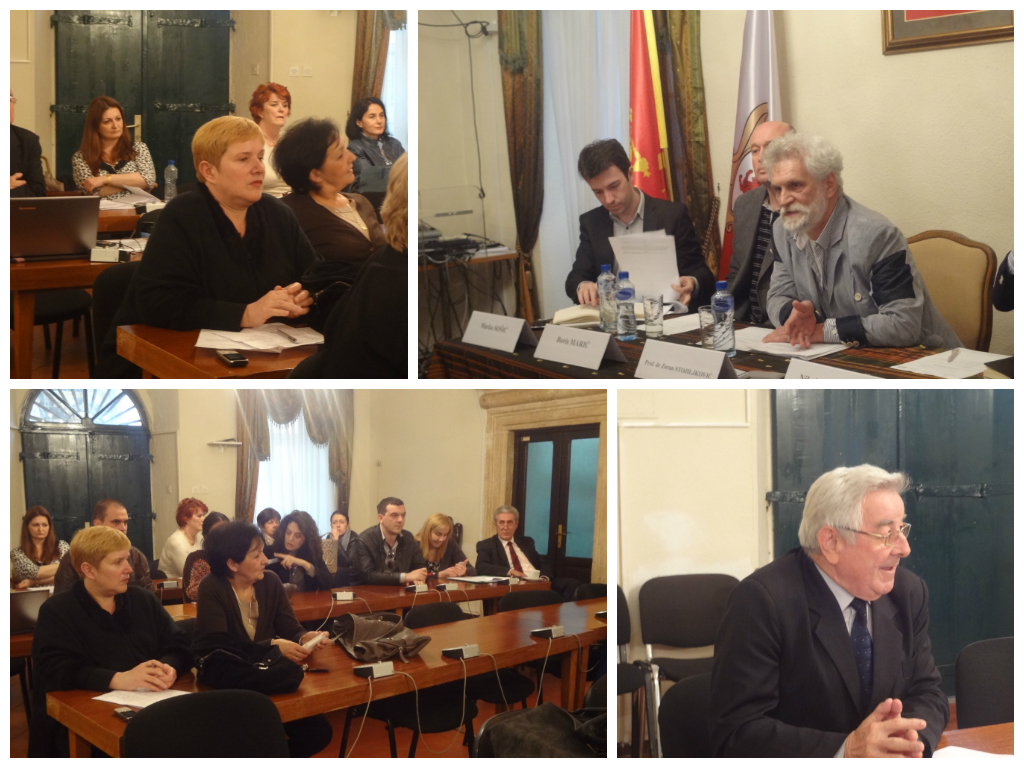 Prof. dr Zoran STOJILJKOVIĆ was speaking about The Role of Local Parliaments in the Prevention and Fight against Corruption – Regional experiences. Within that topic he drew special attention to the needs of small communities and local population, as well as to those elements that open up the space for corruption in relation between citizens and authorities. Also, he spoke about the problem of so called exchange of friendly services in small communities that can hardly be separated from corruption in some of the perceptions. Starting from the explanation that corruption is equal to monopoly with discretionary authorizations added which lacks any kind of responsibility, he concluded: “In order to fight corruption, we need to treat this formula in the reverse order”.

Boris MARIĆ, while speaking about the topic of Local Parliaments in the Government System in Montenegro – Opportunities and Limitations, stated that the action plans for fight against corruption achieved poor results in terms of fight against corruption on this level, but their good side is that they contributed to the making of the map of corruption in Montenegro. “Municipality reports on implementation of the action plans are low quality; in majority of reports, public procurements, employment and urbanization as a topic are not treated, even though these are the areas of the highest risk of corruption. Local parliaments need to have the major role in budget adoption as well as in monitoring of the implementation of the budget”, Marić added.

Marko SOŠIĆ spoke in details about The Control of Local Budgets, at the same time emphasizing that until recently the possibility to gain access to the budget proposals of municipalities did not exist because they were not published on the websites transparently, while as the biggest problems in the mechanisms of budget spending control he mentioned the position of aldermen, lack of capacity, non-transparency of the process as well as the technical issues such as delivering budget proposal in November.

In addition to the above mentioned panelists, councillors of Kotor municipality, municipal staff, representatives of non-governmental organizations also participated at the panel, as well as interested citizens.

The project “Corruption on the local level – Zero Tolerance!” aims to strengthen the role of organizations of civil society, local self-government and competent state authorities in development of policies, monitoring and implementation of the campaign for reduction of corruption in local communities of Montenegro. Specifically, the project seeks to strengthen implementation of anti-corruption policies on the local level, as well as increase the citizens’ awareness on the importance of effective anti-corruption mechanisms and procedures in 14 Montenegrin municipalities: Podgorica, Cetinje, Nikšić, Danilovgrad, Herceg Novi, Kotor, Tivat, Budva, Bar, Rožaje, Pljevlja, Mojkovac, Kolašin, Plužine. The project is financed by the European Union through IPA 2011, and co-financed by the Royal Norwegian Embassy.

Within the project, consultative trainings were organized in the above mentioned municipalities on the following topics: public-private partnerships, corruption and public procurement, combating corruption in employment, performance and abilities of local parliaments, control of local budgets and political corruption. Panel discussions and policy studies on burning issues are planned as follow-up activities, while the work of local parliaments is recognized to be one of the particularly sensitive areas when it comes to corruption.