The study “The role of inspection in the fight against corruption” was presented today at a press conference, at the Center for Civic Education (CCE), by its authors Boris Marić and Tamara Milaš. The study was a part of the project “Inspection against the corruption”. 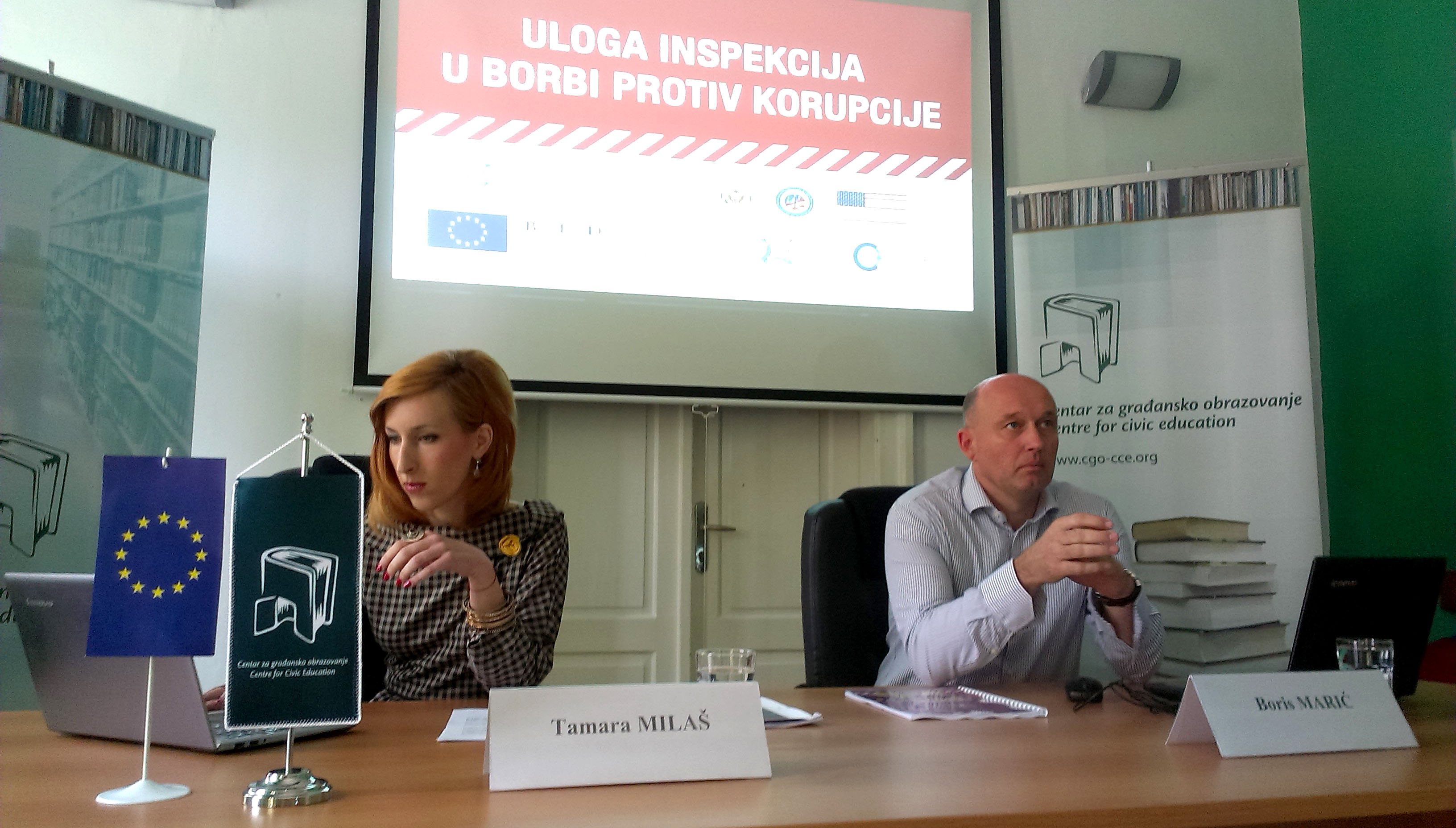 Tamara MILAŠ, programme assistant in the CCE, assessed while presenting the study that “Administration for Inspection Affairs, by the nature of its jurisdiction, is one of the key bodies of whose impartiality and professionalism depends effective fight against corruption and often in the form that most directly affects citizens.” Milaš emphasized that at the same time it is “the body of high risk for the appearance of corruption in its work, which raise the need to specially treat elaboration of integrity with a focus on the possible political influence in the internal regulations of the Administration”. She pointed that the Administration, since its establishment, has less inspectors than planned by the systematization, and that the inspectors are significantly administratively burdened that narrows the space for their professional work.“In the domain of eliminating irregularities inspection rather uses repressive than preventive authorities, as evidenced by the data which indicate that during 2013 138,558 inspections were conducted, 72,008 of which are related to internal monitoring based on the work programme and initiatives in which it found 33,433 irregularities and issued 14,671 misdemeanor warrants. The total financial effects of inspection in 2013 were 6,443,798.82 EUR. This is not sustainable on long term. In addition to this, in communication with the CCE citizens have indicated a selective approach of inspections and the absence of any feedback when they report illegal actions in the domain of the Administration for Inspection Affairs” stated Milaš. In this part, she pointed out that part of the recommendation of the CCE goes in the direction of strengthening of the preventive function of inspection conduct, while the repressive one should be used only in exceptional cases, as well as establishing clear responsibilities for the Administration for Inspection Affairs that citizens who submit applications get feedback as soon as possible concerning the measures taken and findings of the performed inspection.

Boris MARIĆ, senior legal advisor in the CCE, stated that “The Administration for Inspection Affairs is a ramified system that covers the territory of Montenegro, treating wide variety of intervention of social relations and issues. Therefore, it is very important that such an authority is essentially independent, without inappropriate political or other effects.” He added that the “Suspicion that there is such influence on the work of the Administration remains one of the reasons why the Administration has not yet positioned itself as the authority in whose impartiality is fully trusted.” He said that the Administration for Inspection Affairs in the existing anti-corruption framework in Montenegrin is not recognized as particularly important body, which is supported by the fact that its has no representatives in some of the key and strategic anti-corruption bodies or has not been involved in the development of the systematic anti corruptive laws, such as the Draft Law on Prevention of Corruption. “That state of affairs cannot be substituted by the memorandums of cooperation with institutions with which the Administration should cooperate in accordance with the law”, assessed Marić. In addition, he underlined that the “chronic problem is the need to provide assistance to the inspectors on the field by police officers which can sometimes take days.” Reflecting on the implementation of commitments undertaken by the Action Plan for Chapter 23, which relates to the Administration for Inspection Affairs, he assessed that there was very little done, often due to the inertia of other bodies with which the Administration for inspection affairs shared responsibility, and due to the fact that this is not the focus of the Administration. “Very little has been done in the realization of the obligations provided for Action Plan for Chapter 23 on establishing methodologies and risk analysis in the work of inspection, in accordance with the provisions of the Law on inspection work, with the aim of pro-active work in the prevention and early detection of corruption. This obligation is due in the first quarter of 2015 and it is unacceptable that it is not reported what was done so far in creating the conditions for the implementation of these commitments in either of two reports on the implementation of measures from the Action Plan for Chapter 23. Basis of this methodology could be searched in the fact that 2 120 citizens contacted AIA, by reporting irregularities in the period from August 2013 – May 2014, and that the Administration was found responsible for the 1 880 citizens initiatives, of which 74 % were resolved and in 50% of the initiatives were identified irregularities, which indicate willingness of citizens to report irregularities, but insufficient administrative capacity to adequately analyze these cases that generate basics methodology for the risk assessment in the work of the inspectors.”

Within the CCE recommendations it is listed that there is a need to abolish the re-election of the inspectors and convert it to regular assessment of knowledge and success, and in the case that the inspector does not meet the required level of results in areas where inspection is done the process of dismissal should be started. Then, it is necessary to provide essential and full fiscal autonomy of the Administration for Inspection Affairs, whose financial operations upon determining allocations from the Budget of Montenegro, shall be independent and unhindered, which does not exclude the audit by the competent authority. Also, the presentation of the effects of an inspection in the public should focus on implementation and respect of the law, and secondarily to highlight financial effects of inspection, through fees collected on the basis of the imposed fines, because the work of the Administration for Inspection Affairs shall not be recognized as a mechanism for filling in the budget, but as a system for the protection of legality.

The project is supported through the Criminal Justice Civil Society Program (CJCSP) funded by the U.S. Embassy in Podgorica, the State Department Bureau for fighting International Drug trafficking and Law Enforcement (INL). Co-financing, which relates to the preparation of this study, is secured by the European Union through the IPA program for Civil Society Facility (CSF) through Balkan network for civil society development and Centre for Development of NGOs.