Within the framework of the “Youth build Montenegro” project, conducted by the Centre for Civic Education (CCE) with the support from US Embassy, the work of the XX generation of the Human Rights School was organised, encompassing also, as part of its curriculum, visit to the institutions that deal with promotion and protection of human rights. Hence, today the participants had the opportunity to pay a visit to the Committee for Human Rights and Freedoms of Parliament of Montenegro, which was recognised as an important factor in protection and improvement of human rights. On that occasion, participants were awarded with diplomas for successful participation of the School, in the Blue hall of Montenegrin Parliament.

Participants were greeted by Halil Duković, president of the Committee, during their visit to Committee for human rights and freedoms of Parliament of Montenegro, who introduced them with competencies, organisation and work of the Committee and pointed out that strengthening of human rights is not just in the domain of one institution: “If we are to strengthen the area of human rights, we need cooperation – both between national and foreign institutions as well as between national and international organisations.” He added that the Committee is least satisfied with the results of its work regarding the area of raising the awareness of citizens of Montenegro “because we haven’t achieved that level where we respect other people based on their diversity”, but also assessed that the improvement, made within legislative framework of protection of human rights and freedoms, is significant. 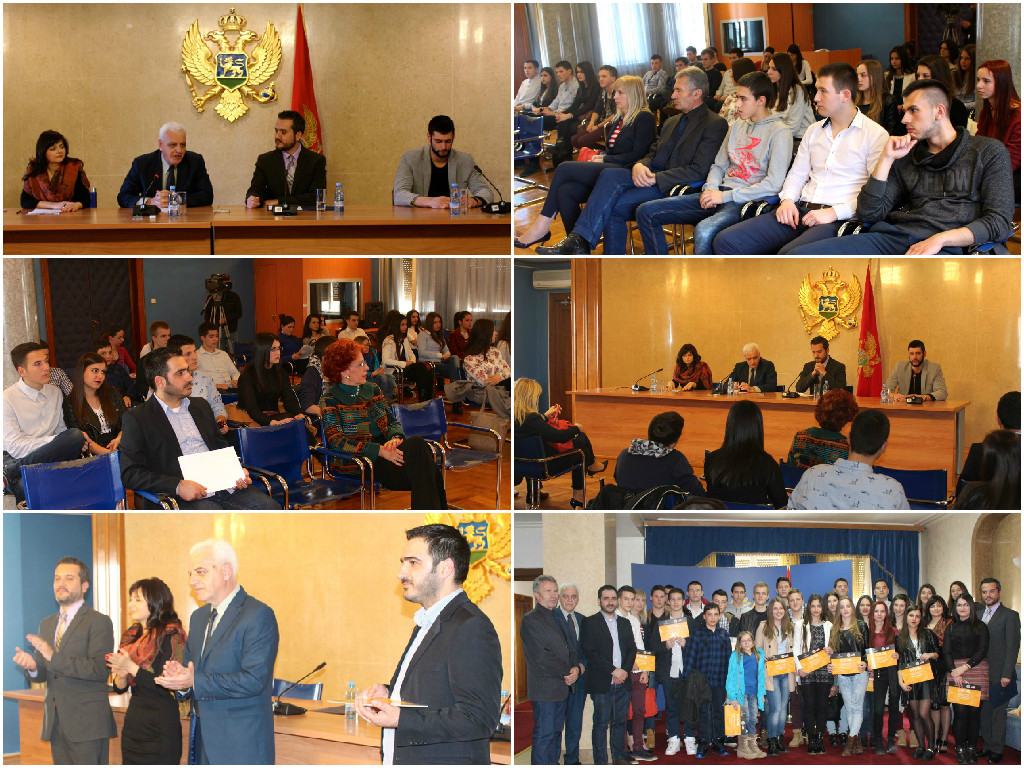 Charge d’affair of the US Embassy to Montenegro B. Bix Aliu stated that he is “proud that the US Embassy could be a part of this project and wanted to thank the Centre for Civic Education for doing this important work and the Parliament for hosting us all here today”. He underlined that the “sustainability of this project points to a fundamental fact—that in a young nation with a long history, young people play an absolutely crucial role in setting Montenegro on the right course. In every democracy, it is the passion and optimism of youth that ensures that a country moves forward, and this is especially true in Montenegro”. According to him, “no citizen is ever too young to promote human rights, both by holding the government and society accountable and by acting in a way that demonstrates respect for others”. By congratulating the participants, he concluded: “You should be proud of yourselves, and I can’t wait to see how you put these lessons into practice “.

Daliborka Uljarević, CCE executive director, reminded that CCE’s Human Rights School is its oldest still lasting programme of alternative education regarding the human rights in Montenegro. She assessed that the fact that awarding of diplomas took place in Parliament of Montenegro has strong symbolic meaning. “Precisely the legislative branch has the most important role in promotion of values and protection of human rights and freedoms, based on its fundamental role of standardising the legislative framework, so that it could be harmonised with international standards and best practices, and based on its supervisory role which requires further improvement, in terms of an efficient control of all those in state system who have the obligation of protecting human right and freedoms of citizens”. In addition, she emphasised how “restrictions, as well as the violations of right to freedom of expression, particularly affect the media and NGO sector, which further aggravates overall democratic progress, but also the discriminatory treatment in relation to numerous marginalised groups – whereby I primarily refer to the LGBT population, persons with disabilities, Roma people and women and children. The responsibility, primarily, lies within institutions. And all those institutions who invest efforts, in terms of an essential improvement of state of human rights, will have the authentic NGO sector as an ally, as well as they will be criticised when fail to provide adequate action”.

Human Rights School provides broad theoretical and practical knowledge on the concept of human rights, promotes the culture of human rights, by inspiring and motivating people to fight for their rights, as well as for rights of those who are not able to do so themselves, and encourages them to have a more direct impact on society in future. Its goal is to establish continued alternative education on human rights. During past 19 generations, School was completed by more than 500 citizens, political party activists, NGOs, state servants from both local and national level, journalists, students and others who showed the interest to link their acting to public scene and provide personal contribution to the achievement of human and minority rights in Montenegro.