Within its activities related to fight against the corruption in education, and participation in global initiative Open Government Partnership, Centre for Civic Education (CCE) proposed an anticorruption measure which would render all masters and PhD thesis of academic structure of employees on higher-education institutions in Montenegro, as well as the works of public officials, easily available and in electronic form.

CCE assesses that it is necessary to create room on portals of higher-education institutions and use it to publish all works of employees of academic structure as a form of contribution to fight against plagiarism, but also as assistance in scientific work of other colleagues. In addition, we should also make room for academic works of public officials on the site of Ministry of Education, so that the interested part of the public could have a direct insight into such works of officials. 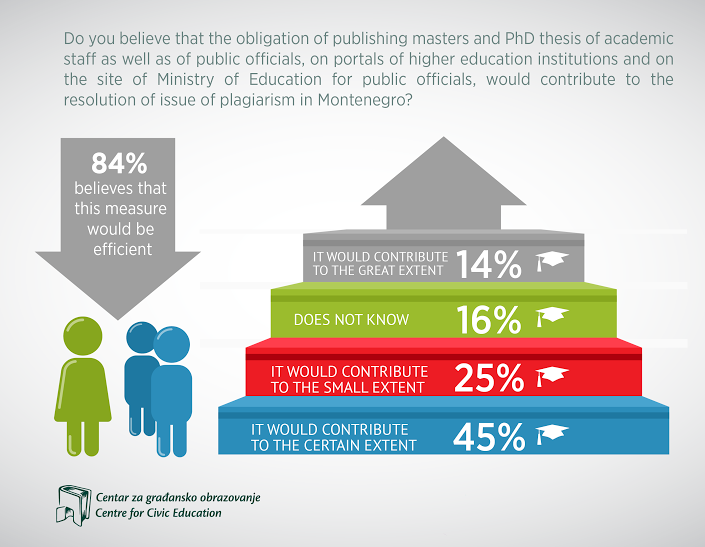 However, the road to introduction of such measure, which lasted almost a year, was not an easy one. Namely, during the creation of Action plan for Open Government Partnership, competent administrative bodies were consulted when this measure was discussed in the presence of representative of Ministry of Education. At the time, there was understanding for the need to render masters and PhD thesis publically available with no exception. After later consultations and changes in the Ministry of Education, there was no understanding for this measure, and the measure itself mysteriously disappeared from the draft Action plan. At the persistence of CCE representatives, the measure was restored and now it awaits the final decision of Government, or the confirmation of proposed Action plan. To some extent, this will be a test which will show whether the Government is willing to form a basis for the fight against plagiarism.

The issue of plagiarism was relatively recently opened in Montenegro, and the institutions still refuse to address this issue in a serious manner. CCE’s research indicates that one third of citizens estimate that issue of plagiarism in higher education is frequent (35%), while 14% of them claims that they know someone who plagiarised his/her scientific, masters or PhD thesis. Hence, this is not only the case of perception, but a case of rather large number of citizens, for Montenegrin context, who know someone who plagiarised his/her work.

Finally, this affects the overall state of education, because citizens also recognise the process of employment and academic appointment as one of the key corruptive processes in education. The obligation of academic institutions is to address this issue efficiently, since it is one of the important prerequisites to restore the trust and credibility in the system of higher-education. Measure proposed by the CCE is an unambiguous guideline for the establishment of systematic fight against plagiarism in Montenegrin system of education, hence we expect that competent institutions will adopt it.

Boris Marić, CCE Senior legal advisor and member of Operational Team for the Creation of Action plan and Implementation of measures from Action plan in line with the principles of Open Government Partnership