Tonight in Podgorica, diplomas were ceremoniously awarded to participants of the XXVII generation of Democracy School, organized by the Centre for Civic Education (CCE) with the support of the Friedrich Ebert Stiftung. Participants who have successfully finished the programme have been awarded with diplomas by Daliborka Uljarević, CCE Executive Director and professor Radovan Radonjić PhD, School moderator.

During awarding ceremony, Daliborka Uljarević has emphasized that „building of democratic standards must be continuous work and education is crucial for development of an open society of active and responsible citizens”. She added that “reforms in Montenegro are burdened by insufficient political capacities that could democratize and Europeanize the country in visionary, strategic, expert and responsible manner. Thus, it is important to strengthen, through education, critical thinking and public discourse based on arguments, as well as that as citizens we participate as much as possible in formulating and proposing of measures of public policies and their implementation”. Uljarević assessed that “precisely those citizens who dedicatedly work on self-development represent potential and chance for reforms and building of a society of rule of law and professional institutions but also for establishment of a model in which the decision-makers would continuously be accountable for their decisions”. 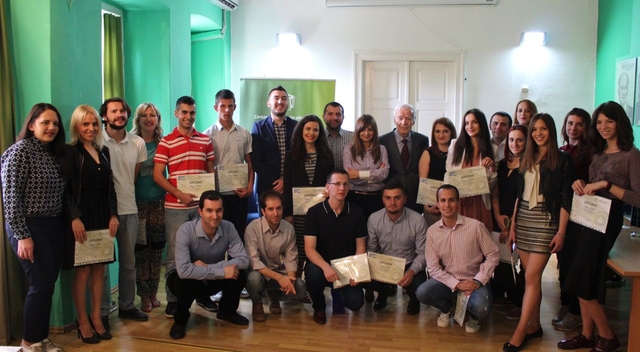 Professor Radovan Radonjić, PhD, has emphasized that the School has become „a gathering place of students and pupils, “regular” activists and political professionals, workers and university professors, as well as everyone else who wish to – through greater knowledge on democracy, human rights and freedoms, ie. on civic transformation of Montenegro and its Euro-Atlantic integration – become active participant in creation of his/her world and his/her own life”. He reminded that “the School is open for all those who are truly interested to create better and more justice society – not in the clouds but in their own country, not with help of transcendental forces but with more appropriate use of country, politics, government and governance”.

“Participants of Democracy School, by their already recognizable human and intellectual composure and focus, give their contribution to, in reality still quite slow and hard, but all the more visible and productive democratic breakthroughs of Montenegro in solving of internal problems and tasks in process of integration both in Europe and world”, concluded Radonjić.

Democracy School is dedicated to understanding of idea of democracy and manner of implementation of that idea. Theoretical knowledge is being examined within its framework, as well as comparative practice and skills and manner of implementation of democratic concepts in everyday life, especially in the political sphere. Programme of the Democracy School is organised through five months long series of sessions, in the form of lectures, workshops, panel discussions, simulations, conferences, screenings of movies followed with discussion on them, etc.

Continuous interest that has been following this programme from its establishment, as well as the fact that this is the XXVII generation, encourages and indicates that there are those citizens in Montenegro who are willing to be socially engaged and to be active participants of ongoing processes, as well as to work on his/her own capacity building. This programme has been established in 2003, and was successfully completed by 765 citizens of Montenegro until now.