Željka Ćetković, CCE programme associate, explained within introductory remarks that the main objective of this study was to assess the track record of Europeanization of political parties in Montenegro, aspiring state to full membership in the European Union (EU). “In this manner, we wanted to indicate on the importance of adequate incorporation of European affairs within the parliamentary elections 2016 election campaign, but we will also reflect on these elections in the upcoming period through different aspects, with primary focus on what is the contribution in the establishment of political memory and the analysis of sector policies in the domains that we cover”, told Ćetković. 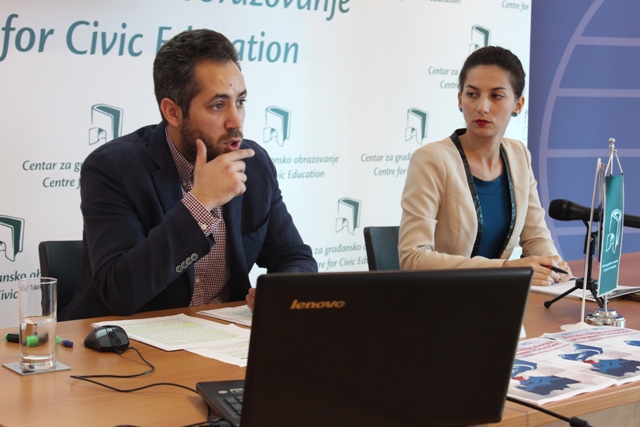 Vladimir Vučković, CCE programme associate and the author of study, clarified that the focus of research was to determine the extent and outcome of EU’s influence on parties by observing the “top – down” approach of European integration on parties in Montenegro, as main agents of comprehensive changes and that the “key question in focus of the study is whether the interest for the concept of Europeanization increased or decreased among Montenegrin political parties during the parliamentary elections”. Vučković pointed out “it is important to determine the level of transformative power of EU among domestic political parties, since in the upcoming period they will intensify the pace and quality of process of accession of Montenegro to Union, as well as the increase or decrease of support of citizens for that process”.

Eight parties or coalitions which participate on parliamentary elections in 2016 – Democratic Party of Socialists (DPS), Democratic Front (DF), Grand Coalition KEY, Social Democratic Party (SDP), Democrats, Social Democrats, Positive Montenegro and the Bosniak Party – were the subject of this analysis. They were chosen based on the fact that they had minimum of two MPs in current composition of Parliament of Montenegro.

Progress of Western Balkan states in European integration, even of Montenegro, depends on meeting the conditions which were set on three different levels: 1) Copenhagen criteria or general conditions (stability of democratic institutions, rule of law, respect and protection of human and minority rights and functional market economy); 2) Conditions common for Western Balkan states (cooperation with Hague Tribunal, regional cooperation and strengthening of good neighbourly relations, return of refugees, ethnic and religious reconciliation, protection of minorities, freedom of media, judicial reform); 3) Specific conditions related to Montenegro (decisive fight against corruption and organised crime, reform of state institutions, reform of judiciary, fair and free elections, protection and improvement of status of human and minority rights). Hence, the research contained a scheme with 11 categories related to meeting the political and economic conditions for EU membership.

Vučković noted that the “results of research indicate that the influence of European Union on political parties in Montenegro is obvious, but still limited in scope and reach. Certain level of transformative power of EU can be identified in relation to parties or coalitions in terms of the process of European integration. However, newer election manifestos bring changes in the understanding of European policy, and EU as a whole, compared to previous elections, especially in the case of DF coalition, thus making a distinct turn in programme from moderate continued approach to process of European integration to expressions of Euro-scepticism”.

He further clarified that, even though the majority of relevant parties in Montenegro achieved a recognisable level of Europeanization through their own election manifestos, findings indicate that the majority of provided measures, solutions or promises were given generally and that they were insufficiently elaborated. “There is a dominant support from relevant political actors for the continuation of European integration reforms, but it is not always accompanied with specific and detailed plans of action and strategies, which renders the support mostly as declarative. What is interesting based on the analysed, is that the highest level of Europeanization is marked precisely by the political group (DF) which was marked as Euro-sceptic based on the same analysed programme content. In case of other political subjects (DPS, KEY, SDP, DMNE, SD, PMNE, BS), which state that they strongly support the continuation of European integration processes, the influence of EU varies from party to party. In such a way, it ranges from those parties (KEY, DMNE), where the transformative power of EU resulted in the introduction of specific and appropriate measures that have been harmonised with the political conditions of EU, but this does not apply to every EU policy, only partially, all the way to those subjects (DPS, SDP, SD, PMNE, BS) who did not make an effort, or were not able to do so, to provide specific plans of action and strategies which involve the standards of EU, thus leaving the voters without a clear view on the majority of policies of EU”, Vučković concluded.

“Key challenge which impedes a more purposeful influence on the internal political processes and actors is the lack of political will, but all the more are capacities of political elites to adequately solve current reform political issues through the harmonisation with EU standards. Even though Montenegrin public strongly supports the EU accession process (63% of the population believes that EU membership would be beneficial for Montenegro), party political elites declaratively advocate the membership in EU as most important foreign policy priority, simultaneously demonstrating limited effort to systematically and adequately address political conditions laid in accession negotiations. Hence the transformative power of EU on relevant Montenegrin parties is visible within the frameworks of general, but limited in specific reach and outcome”, assessed Vučković.

The level of implementation of EU’s policies, rules and norms in Montenegro mostly depends on the interest of Montenegrin public for certain policy, which consequently succumbs to strong public pressure to harmonise with the political requirements of EU, more compulsory rather than actively. In other cases, the level of interest of political elite for meaningful and adequate harmonisation with standards of EU is marginal “our expect is that the influence of Europeanisation on internal changes will remain limited in the following period, unless the political elite decides to change its approach and demonstrate true political will, as well as the capacity, to fully harmonise with the conditions for the accession to EU”, projected Vučković.

Study Europeanization of election programmes in Montenegro – to which extent political parties acknowledge European policies? was done with the support of Friedrich Ebert Stiftung.