At presentation of research Are free textbooks truly free? that Centre for Civic Education (CCE) organized today, Mira Popović, CCE programe associate reminded of the international and constitutional obligations of Montenegro to ensure free primary education, noting: «However, the practice shows that the Constitution does not have binding force and that its consistent application depends predominantly on political will. So for years, despite appeals that the Centre for Civic Education (CCE) has submitted to relevant authorities, finding a sustainable solution for complete coverage of the costs of basic education so that it was also de facto free is still being avoided».

In the school year 2015/16 free primary education was compulsory for 68.108 pupils attending regular primary education and 733 pupils with special educational needs, which also includes that many textbooks. Although there are no official figures yet on the exact number of pupils in the 2016/17 school year, it can be assessed that it is approximately close to previous school year.

„Media have during this year repeatedly reported that some municipalities provided free textbooks for pupils and CCE welcomes such practice. However, bearing in mind that this is an election year and the fact that this approach has suddenly “come to life”, the question arises to what extent and whether these “investments” are related to genuine commitment of the local government for providing free primary education or they are part of election activities“, estimated Popović.

„On the basis of requests for free access to information that CCE has sent to all Montenegrin municipalities, the Capital City and the Royal Capital, i.e. a total of 23 requests, until 10/12/2016, 16 municipalities have sent their responses, the Capital City and Royal Capital i.e. a total of 18 local self-governments. The answers, in spite of several interventions, did not submit the following municipalities: Budva, Bijelo Polje, Plav, Rožaje and Gusinje.“, stated Popović.

„This raises aquestion whether it really is such a significant step forward when it comes to financing education by local self-governments or this is one of the «incentives» to election campaign for elections in 2016. Expressed in percentages, there was increase in the number of municipalities that have adopted this practice, so that out of total number of municipalities, 69,56% of them has allocated funds for 2016 compared to 2015, where the percentage was 26,08%, i.e. in comparison to 2014 when only 13, 04% of them had this practice.

When it comes to total sum for all years, municipality Berane is leading, having a continuity in addressing the issue of free textbooks, including a step forward which this year was made in the part that textbooks were provided not only for first graders but for all elementary school students, and is followed by the Capital City of Podgorica.

„However, the abrupt growth was noted in municipalities of Nikšić, Plužine, Ulcinj, Danilovgrad, Tivat, Cetinje and Žabljak. Growth of expenditure is clearly significant when comparing the summary of previous three years, noting that it is 8 out of 23 municipalities for which the CCE has collected data. More specifically, in the last three school years, from the budgets of local self-governments has been allocated 689,679.02 euros, of which the most in 2016 i.e. 444 697.45 euros, significantly less than in 2015 i.e. 188 817.17 euros, and the least in 2014 i.e. 56 094.40 euros.“, pointed out Popović. 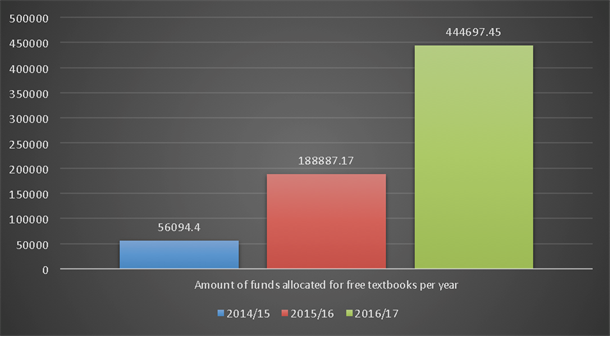 Popović has reminded that Centre for Civic Education (CCE) is continuously committed to consistent application of the Constitution and laws guaranteeing free primary education in Montenegro, and proposed «establishment of clear budget lines in local self-governments through which funds for providing free textbooks for primary school students would be allocated every school year, and not to apply this only in election years».

«CCE welcomes the commitment of those municipalities that have already made efforts to establish this practice in previous years, but at the same time expresses serious doubts that this sudden rise of these examples in an election year is one form of attempt of electoral manipulation. Hence, CCE will also closely monitor these trends in following years.», announced Popović.