Knowledge about human rights is necessary to understand the concept of tolerance and to it towards other people. This was the assessment of the meeting of participants of XXIII generation of Human Rights School of Centre for Civic Education (CCE) with Ombudsman and his associates.

On the occasion of International Day of tolerance, participants of XXIII generation of Human Rights School, organised by Centre for Civic Education (CCE), with the support of Commission for the allocation of part of the revenue from games of chance through the project “Education for human rights!”, today visited the institution of Ombudsman of Montenegro, within the practical part of their teaching, thus gaining the opportunity to familiarise with the functioning, competencies and work of Ombudsman. 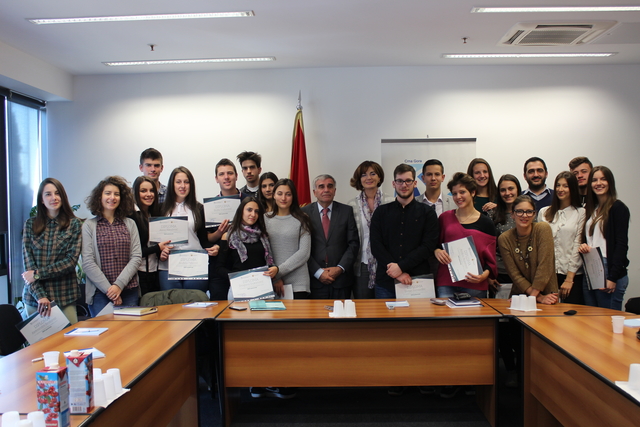 United Nations Educational, Scientific and Cultural Organization (UNISCO) established the International Day of tolerance in 1995, in order to draw the attention to the respect and appreciation of people who are different than others.

At the end, participants were awarded the diplomas for the successful participation in Human Rights School by Ombudsman of Montenegro Šućko Baković and Petar Đukanović, CCE Programme coordinator.

An important segment of every Human Rights School is the visit to institutions that work on the protection and improvement of rights of citizens, hence the XXIII generation paid a visit to Ombudsman of Montenegro. Baković talked about the mandate and work of the institution regarding the protection of human rights and freedoms, and he also answered to questions of interested young people. Baković estimated that it is of special importance for young people to opt for such form of education, because they are the future of this state. “Knowledge on human rights is also necessary for tolerance, because if you are not familiar with your rights, then you cannot speak about tolerance. We must come to terms with the fact that we are cohabitating, rather than living next to each other, as well as that tolerance implies a compromise, strength and will to listen to what others have to say, regardless of their difference compared to ourselves”, Ombudsman told. He added that tolerance implies the perception and understanding of diversity. “I congratulate you the Day of tolerance and urge both us and yourselves to be men, because without it there can be no tolerance or humanity.”

Snežana Mijušković, Deputy Ombudsman, and Duška Šljivančanin, advisor, discussed about the rights of children and young people, role and activities of Ombudsman in the promotion and protection of children’s rights.

Petar Đukanović reminded that the CCE’s Human Rights School is the oldest, still-lasting, programme of alternative education on human rights in Montenegro, which marks 12 years of existence this year. «Everyone at CCE is pleased that new generations of young people are demonstrating an ever-increasing interest in learning about human rights and active engagement in the representation of their rights, as well as the rights of those who are not able to do so themselves». He indicated on the importance of strengthening the young people, especially in terms of the manners of reacting to discrimination of vulnerable social groups, and considering that «in addition to significant improvements of legislative framework in the area of human rights, we still have discrimination in relation to most vulnerable groups, which reminds us that the society, as a whole, should work on the establishment of culture of human rights».

During their last module, participants of XXIII generation Human Rights of School had the opportunity to speak, in CCE premises, with Marina Vujačić, executive director of Association of Youth with Disabilities of Montenegro, on the rights of persons with disabilities in Montenegro. In addition, they worked on the design of one of their actions that will be carried out in their local communities in the next month in order to contribute to improvement of human rights in areas that they identified as problematic, where they could get involved personally.

Previous twenty two generations of this School were completed by more than 600 citizens, activists of political parties, NGOs, state service servants from both local and national level, journalists, students and others who showed their interest to tie their acting to public scene and provide personal contribution to realisation of human and minority rights in Montenegro. Enrolment of new generation of School of Human Rights is planned for February 2017.