Only direct and open discussions about difficulties that citizens of Montenegrin municipalities are facing when asking for certain information about work of the same, but also by having insight into how local administration is working and what are its limitations when it comes to improving transparency of work of municipality itself, can altogether help in understanding but also strengthen consistent application of the Law on Free Access to Information, as it was concluded today at the roundtable I have the right to know, organized by the Centre for Civic Education (CCE) in Podgorica.

During the opening session, Mira Popović, CCE programme associate, pointed out that „local self-governments record modest performance in the area of openess and transparency, and there is no tenable justification for such conditions“. Furthermore, she pointed out the efforts of civil society to be critical and a constructive correctiv, identifying, reacting and indicating insufficiencies of system but also offering recommendations for transformation into a true and open society. „However, if our efforts are not recognized by public sector organs, in this case municipalities that can undertake necessary steps in resolving identified problems, we will continue to spin around in a vicious circle of non-transparency“, she concluded. 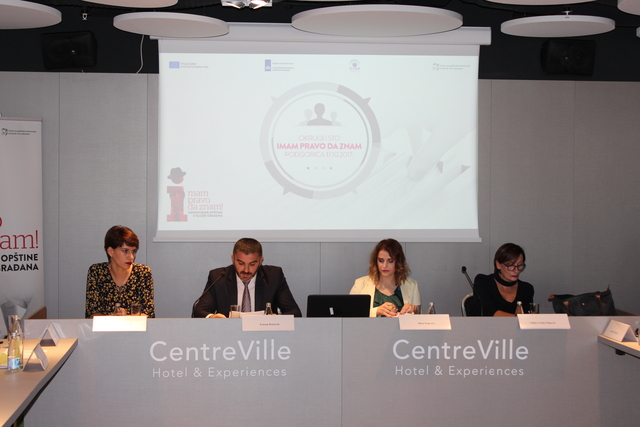 Goran Petrović, Chief Administrator of the Capital City, reminded of the existing legislative framework in this area as well as the fact that „good governance implies that local self-government organs undertake all actions that meet the needs and expectations of citizens.“ He assessed that situation in the Capital in regards to this matter is good, but it can still be worked in order to improve it. He also pointed to the lack of information and motivation of citizens of the Capital themselves, and to lack of developed awareness that they themselves should engage in public policy making processes that are of crucial importance to them. “Local self-governments have to be a service to citizens and render available every information that is essential for passing informed decisions” Petrović stated.

Ivana Bogojević, Public policies researcher in Institute Alternative (IA), has shared experiences of IA in the communication with local self-governments in two areas – participation of citizens in creating policies at the local level and upholding the Law on Free Access to Information and reflected upon analysis of reports on public discussions that indicate that „citizens insufficiently participate in public discussions on local self-governments’ budgets, which is for the most part a consuequence of them not being sufficiently informed on possibilities of participation in decision making at the local level, i.e. poor efforts of local self-governments to inform and motivate citizens to participate in the process of creating of this important public policy.“ She assessed furthermore that „local self-governments do not publish information on their expenses at web pages, and that majority of data could only be acquired via request for free access to information. However, they are often exceeding the legal deadline in submitting this information due to which Institute Alternative needed more than a year to collect documentations from majority of local self-governments.“

Milka Tadić Mijović, President of the Centre for Investigative Journalism (CIJ MNE), emphasized that there is certain progress in availability of information of public interest, considering though that availability of information itself differs from municipality to municiplaity, as well as regarding different levels of authorities but also in regards to topics. „If you deal with topics such as position and status of certain minorities in the society, or for example issues related to culture, information are easy to acquire while, on the other hand, if you reasearch information that are related to abuse of law, it is harder to acquire information“, pointed out Tadić Mijović. She highlighted a bad position of journalists who are dealing with issues of corruption, abuse of power and similar in smaller municipalities „becuase Montengerin society has not yet completed transition from totalitarian regime to democracy thus acquiring information from organs at the local level is harder since sometimes there is bond between local organs as the most common employers and journalists themselves who due to this connection demonstrate a lack of critical relation towards work of local self-governments.“ 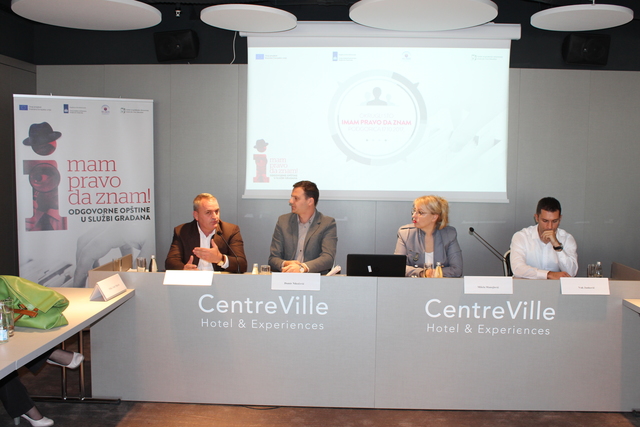 Commenting on these statements, Muhamed Gjokaj, President of Council in the Agency for Personal Data Protection and Free Access to Information, has stated that Agency has so far passed 3000 decision upon complaints received by persons and organizations who have initiated procedure for request to free access of information. Furthermore, it has been noted that, according to amendments to the Law on Free Access to Information, silence of public administration organs is interpreted as permission for access to information. „Montenegro is in the very top when it comes to great amount of complaints upon requests since we are a country that most creatively interpretes Law on Free Access to Information“, pointed out Gjokaj. He emphasized that Agency will, from the following year, start to conduct supervision in municipalities and all public administration organs in Montenegro and thus consistent application of this Law will be checked.

Coordinator of Legal Programme in the Network for Affirmation of Non-Governmental Sector (MANS), Vuk Janković, pointed out that MANS has send over 115 000 requests in twelve years since this Law came into force, thus aligning itself as a leader in regards to exercise of this right not only in Montenegro but in Europe and world as well. „During its many years of work MANS has identified certain progress in this area, but inadequacies still exist in application of this Law, which is reflected the most in an uneven application of substantive law that varies in relation to organ that is applying it. Local self-governments must perceive acting upon this Law as certain aspect of proactivity and not mere obligation since it would be a manner of emersion from vicious circle that is not giving concrete results“, stated Janković. He pointed out that „silence of institutions even after decision of the Agency itself but also of Administrative Court is a large problem, as it is also the fact that Administrative Court has not so far been deciding on the merits in issues related to Request for free access to information.“ 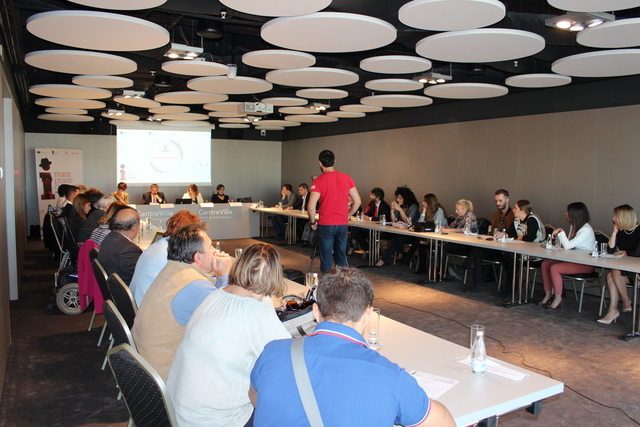