On the occasion of 24March, the International Day for the Right to the Truth Concerning Gross Human Rights Violations and for the Dignity of Victims, the Centre for Civic Education appeals to the Montenegrin judiciary to take all legally prescribed measures to resolve the destiny of missing people and to repress the impunity of war crimes by processing responsible for violation of human rights and for the suffering of innocent people during post-Yugoslav wars in 1990s. Other competent institutions have to undertake more efforts in order for the facts on crimes from the past to become a part of general culture and formal education system, as we have a right to know the truth about serious violations of human rights and dignity of the victims. 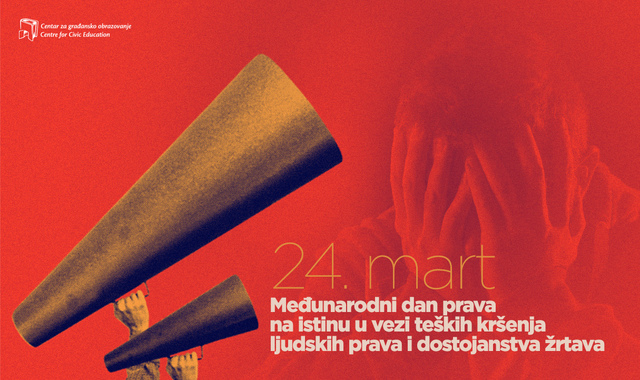 We remind that less than three decades ago, post-Yugoslav ground was territory of war, human suffering and serious violation of human rights. During those war conflicts, at least 130,000 people lost their life, while the destiny of more than 10,000 people still remains unresolved. This represents one of the issues that jeopardize the stability of the society and the region, especially in light of an inadequate process of facing with war past, practice of impunity of war crimes and non-determination of facts on war crimes, which narrows the possibilities for true reconciliation. Montenegrin society, as well as all other societies of ex-Yugoslavia, has been trying for decades to transform into society of stable democracy, tolerance and non-violence. However, that can only be achieved by efficient work of national institutions and their regional cooperation that produces track record, aiming to improve the state of affairs in this area, which is also highlighted by the new EU Strategy for Western Balkans.

On the other hand, the devoted work of civil society organizations, in Montenegro and the region, has enlivened the discourse about the importance of facing the past, but also the need for greater functionality of the existing mechanisms, prior to all – the judiciary that needs to process war crimes, and the establishment of new mechanisms like RECOM.

After all that had happened in Europe during the twentieth century, a lot of questions still seek answers. It is the responsibility of all parts of the society towards future generations to make their contribution in finding those answers, namely the creation of a factual record and a discontinuation with the practice of manipulation through deliberately distorted truths and information based on unilateral, incomplete data on events from a recent history. At a time of populism and a collapsed value framework, the CCE appreciates the importance of striving to create a society of functional rule of law, a society based on truth and reconciliation, and in that direction, we carry out numerous peace and education programmes in Montenegro and in the region.

International Day for the Right to the Truth Concerning Gross Human Rights Violations and for the Dignity of Victims was established by the General Assembly of the United Nations as a day of remembrance of Archbishop Oscar Arnulfo Romero, acknowledged human rights defender, who was murdered on 24 March 1980, due to harsh convictions of human rights violations of most endangered populations, by defending the principles of protection of right to life, promotion of human dignity and strong opposition to all forms of violence. The purpose of commemoration of this day is to indicate on the respect and remembrance of victims of severe and systematic violation of human rights and promotion of importance of right to truth and justice.

Tamara Milaš, CCE Programme associate and Spokesperson of Coalition for RECOM in Montenegro