On the occasion of another Student Day – 4 April – the Centre for Civic Education (CCE) notes, with regret, that students remain one the most inactive social group in Montenegro, which does not use its potentials nor it responds to their own and social needs in direction of improvement of their position and democratic development of Montenegrin society. 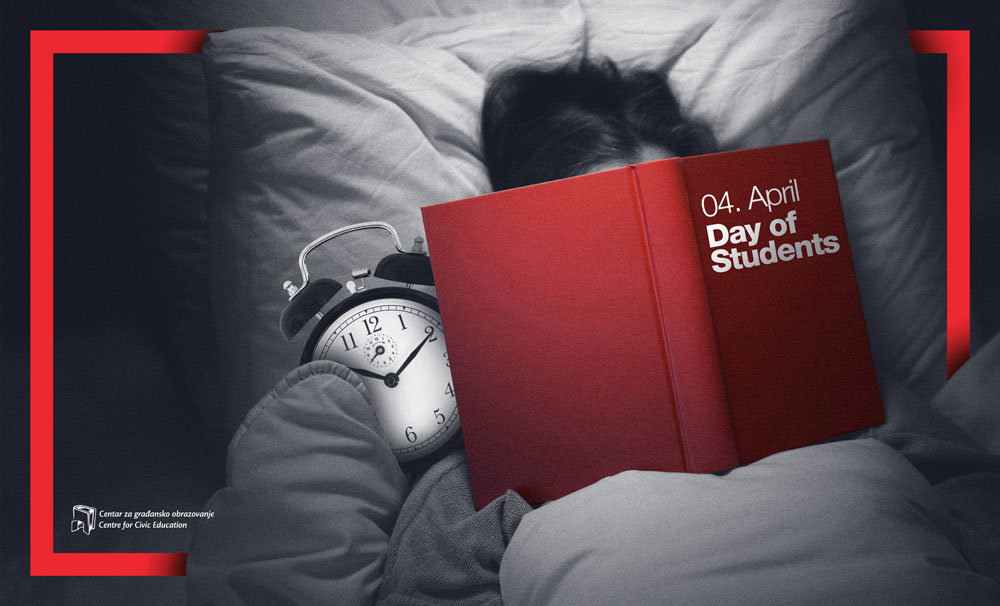 Lack of student’ activism in Montenegro is an illustration of a society that does not cherish the culture of resistance and rebellion, a society that has serious deficiencies within education system that does not develop critical thinking, and rather value more corruptive “skillfulness” in relation to principles and values. Montenegrin students do not have an articulated attitude on any issue that may confront them with the structures of power, and they are racing to explain that political and social affairs do not interest them, although these developments shape their future. A special contribution to this state of affairs is given by representatives of student umbrella organizations who are the most silent and most invisible when it comes to the fight for student rights, as well as civil rights in wider framework, which is vice versa in proportion to the benefits they individually have by representing students.

What can a student lose if s/he stand for her/his rights? One or two years during the studies, but they can get far more in self-building process and give personal stamp to the society in which they live.

CCE research indicates that 50% of young people want to leave Montenegro, and amongst them are dominantly those who in the process of education. This warns that young people in Montenegro actually give up before they have tried to do something, and all of us should be concerned about the future of the country from which young people, who already have a certain level of higher education, want to leave.

Montenegro has made a certain step forward concerning the availability of higher education. The new Law on Higher Education has introduced free studies at the University of Montenegro (UCG) and compulsory practice on all subjects. There is still a significant space in which higher education institutions have to work to substantially improve their transparency, openness, excellence and influence – the criteria by which Webometric ranks universities and where Montenegrin universities are chronically poorly scored. The role of a professor is crucial for development of critical blades within students and when they stop being silent about burning social problems, we will have the basis for talking about serious academic community, contrary to current interest groups of professors of questionable references, with rare exceptions that have integrity and scientific achievements.

Montenegrin students need to know that no one will solve their problems, but these problems will only accumulate with their lack of interest and inactivity, and consequently their perspectives in society will continue to narrow. Therefore, the CCE invites students to participate more actively, to fight for their rights and to be brave and persistent in that struggle, as students have the power to make changes and there is no reason to give up that power.