In the EU accession negotiation process the key problem represents non-compliance of technical and political aspect.

This was indicated in the second part of the conference “Seven Years of Montenegrin Negotiations with the EU” organized by the Centre for Civic Education (CCE), supported by the Ministry of Public Administration and the German Friedrich Ebert Stiftung, and in cooperation with European Integration Office of the Government of Montenegro.

A member of the Judicial Council and Judge of the Administrative Court, Ana Perović-Vojinović, said that the European Commision’s Report on Montenegro, in the part referring to the judiciary, ascertained “some progress”.

“But, the three key recommendations are given: to strengthen accountability in the judiciary by establishing the balance of the results achieved in the implementation of codes of ethics and disciplinary responsibility of the holders of judicial office, to ensure the timely implementation of the ICT strategy for the judiciary, and to improve the overall management of human, and the infrastructure capacities of the judiciary, ” stated Perović-Vojinović.

She noted that in the past seven years the judiciary has been the main carrier of many integration processes related to the EU accession. “There were great challenges ahead, very difficult tasks. I think that the judiciary got an epithet of a reliable partner in the processes related to the EU accession, because our strength, will and motivation to overcome all possible obstacles were recognized. During this period there was a big turn when it comes to the judiciary”, assessed Perović-Vojinović.

According to her, the main disadvantage is the lack of material conditions, as well as the fact that technical equipment is not in line with the responsibility of the judiciary for this demanding process in a responsible manner.

President of the European Integration Committee of the Parliament of Montenegro from the Democratic Front (DF), Slaven Radunović, told that this parliamentary body had put things like no Parliament from all the countries that have joined the EU so far.

“This is the first Committee that used to return the negotiating positions of the Government of Montenegro for reconsideration. This did not happen in any other country, and we have succeeded by unanimous decisions. Secondly, the fact that, according to the Rules of Procedure, the President of the Committee comes from the opposition, has provided the opportunity to have critical tones”, staed Radunović.

He announced the new phase of the Committee’s work, which, as he specified, is to supervise the implementation of “all that we have assumed as a society and by control over concrete institutions that are identified as brakes are in progress”.

“We will be, what I think that the Committee on European Integration should be – public eyes, supervision of the process,” Radunović stated. In this context, he emphasized the importance of cooperation with civil society.

A member of the Parliamentary European Integration Committee and the Anti-Corruption Committee from the Democratic Party of Socialists (DPS), Daliborka Pejović, assessed that the key problem in the negotiation process is “technical non-compliance with the political aspect”.

“It keeps on being burden. I’m afraid if someone does not break that line or that parallel system of functioning, we will have a problem in understanding that Montenegro may not be compatible in all segments in the European integration process. Simply, Montenegro does not have such kind of resources, both because of its size and because of everything that is the character of Montenegrin society”, Pejović pointed out.

She has questioned the sustainability of certain solutions that have been enacted and which are related to the integration process.

“Do we know which European Union we are negotiating with? Does the EU change itself? I’m not sure that we are aware of that”, Pejović said.

Pejović wondered “are we aware of the EU’s problems and can Montenegro once appear as one kind of collateral precisely of the reality that the EU lives in”. 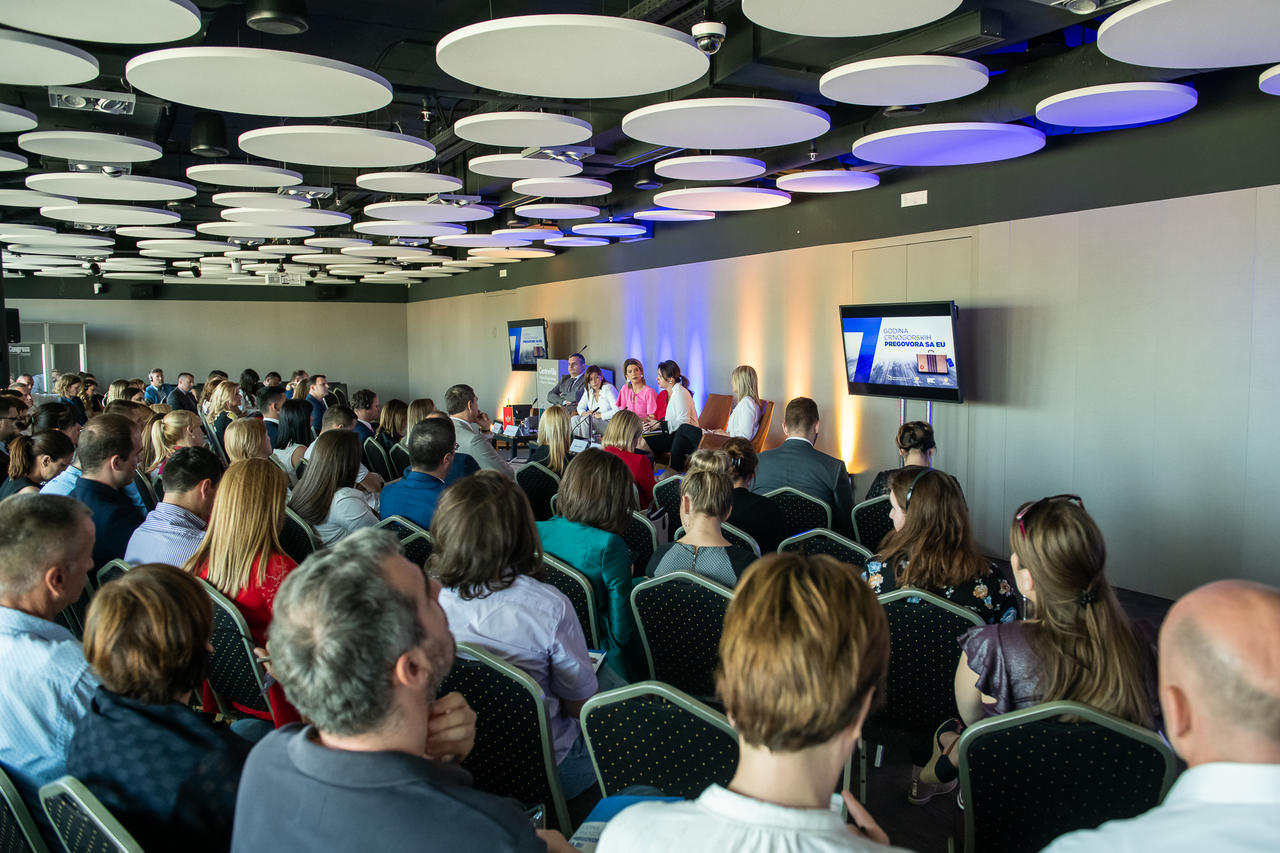 “Montenegro has two serious challenges. I politically and personally think that, by manipulating or improvising Montenegrin reality, we are consuming the only indisputable thing – Montenegrin qualitative resources in people who do not belong to parties, interest groups or organized criminal groups, but belong to themselves and are sovereign in their knowledge and professionalism “, stated Pejović.

Executive Director of Centre for Development of NGOs and member of the Working Group for Chapter 23, Ana Novaković, assessed that the non-governmental sector does not trust the authorities, noting that the reasons for this are “very real and objective”.

“The authorities have demonstrated to us, especially for the last three, four years, that what is primary for us – respect of laws, equality of all before the law, and need to establish the rule of law – that this is not the same system of values ​​for the ruling party which in the last three, four years have mercilessly violated those laws in the legislative body”, underlined Novaković.

She said that she was sure that the authorities do not trust the non-governmental sector. She stated also that there are pre-conditions for representatives of civil society to participate in the work of some working and advisory bodies. “But the very fact is that they will be excluded from these bodies unlawfully once when they say or do something that does not go hand in hand to the ruling party,” Novaković emphasized.

“Mainly, this distrust or labeling us as enemy of state is linked to some of our attitudes which is contrary to the current political position or orientation of the ruling party. As for the assessment or acceptance of our work, it exists to a certain extent”, assesed Novaković.

“I think we have come to the stage when the proposals and suggestions of a significant part of the non-governmental sector in relation to the negotiating phase in which we are, are diametrically opposed to what the views of the Government. It will be difficult to establish the dialogue between NGOs and the authorities “, concluded Novaković.

During the discussion, Perović-Vojinović was asked about what kind of message the Judicial Council is sending by accepting Vesna Medenica’s third candidacy for the position of President of the Supreme Court. She said that this procedure is ongoing and that she does not want to comment on it. However, she also expressed the opinion that this issue was too personalized in public, although she admitted that it could be professionally polemicized. Radunović added that Medenica was a candidate for that position for the third time “because she is a party soldier”.

Asked about the responsibility of the deputies of the ruling majority for unlawfully made decisions in the Parliament, and above all, in relation to the illegal dismissal of unsuitable members of the RTCG Council, Agency for Prevention of Corruption and the Vice Governor of the Central Bank, Pejović stated: “Nothing obliges MPs to vote by law, but by their own feeling. The question arises if the judiciary is to interfere in the legislative, then what are we talking about and about which division of power are we talking? I perceive this as a problem.”

Novaković believes that the Government is is responsible for Montenegro having a negative rating for second year in a row when it comes to the freedom of media. She pointed out that the candidacies of the Public Broadcasting Service members were contrary to the legal prerequisites.

While commenting on the fact that the Judicial Council does not announce decisions on the disciplinary and ethical responsibility of the judges until the end of the administrative dispute Perović-Vojinović explained that the principle of privacy must be respected until the decision is final.

Radunović estimated that the balance clause “shyly” started to be appled to Montenegro. “It was introduced through the back door because Montenegro is ready in the administrative and legal sense to open Chapter 8. I think that this is kind of a tacit response to send a signal to Montenegro that it has to change something”, Radunović said.

Commenting the remarks on Agency for the Prevention of Corruption and its failure to act in the ‘Envelope Affair’ and still unraveled ‘Recording Affair’, Pejović said that she was surprised by the European Commission’s interest in ‘Recording Affair’, stressing that for her “political story about the Recording Affair” is finished.

“When it comes to the judicial part, the only information I have received is that these proceedings are ongoing, and they are either unproven or will be proven,” Pejović pointed out. She said that everyone was prosecuted in the ‘Envelope Affair, ‘’22 or 23 people,” and that “no one complained about the decision of the Agency for the Prevention of Corruption” regarding this case.

In reflection on the policy paper published by four NGOs (CCE, CDNGO, IA and CeMI) a year ago, Novaković that even today it should be considered to threaten the Montenegrin authorities with a balance clause because of lack of substantial progress.