On the occasion of 21 September – International Day of Peace, the Centre for Civic Education (CCE) urges decision-makers, competent institutions and creators of public policies to proactively and continuously work on establishing a society based on tolerance and mutual respect to preserve peace. 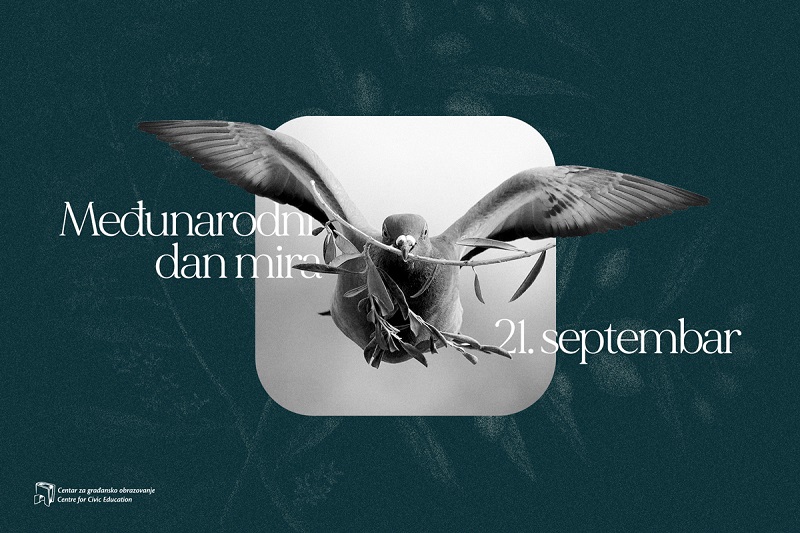 Armed conflicts, which happened during the 90s, destabilized ex-Yugoslavia, and Montenegro was not immune to the effects of those events as well. The consequences of disrupted relations are still felt in those societies which have not made any progress in the process of reconciliation.

Unfortunately, the outgoing government supported reconciliation efforts but only in a formal and not substantive manner, and this kind of policy did not lead to confrontation with the past which would have been heeling for Montenegrin society. This is why even today we have expressions of that, and the recent and unpleasant events in several Montenegrin municipalities followed with hateful nationalistic messages through graffitis, and as well as ruined facades of houses in settlements in which people of Muslim faith dominantly reside. Also, we have witnessed the devastation of the rooms of the Islamic Community in Pljevlja with the note left – „A blackbird has flown, Pljevlja will be like Srebrenica“, as well as the earlier persecution of the Tomkić family from Berane. These examples of systemic oblivion and a lack of a culture of peace, with the strengthening of radicalism, have justifiably upset the Montenegrin public.

Breaking down the walls of nationalism and fascism, removing the consequences left by the war in the region, encouraging a rational and unbiased approach, competence, principle-based work and reconciliation, co-habitation, tolerance and economic prosperity should be a political framework and modus vivendi of every Montenegrin citizen. Hence, we invite the social actors to help, with their public actions, in shaping Montenegro as a country of equal opportunity for all citizens, irrespective of their nationality, religion, race, gender, age, or health condition, i.e. country in which basic principles of democracy and rule of law will be respected. Only in this way can the idea of peace be strengthened and the differences between people accepted rather than used for discrimination.

The International Day of Peace is marked on 21 September, following the Resolution 36/67 passed by the UN General Assembly. On the occasion of this year’s Internation day, the UN has adopted also the proposal to mark the World Day of Cease of Fire and International Day of Non-Violence “so that member states and entire mankind devote to strengthening the ideals of peace and expressing dedication to peace via positive examples“.