On the occasion of 9 Novembar, the International Day against Fascism, Anti-Semitism, the Centre for Civic Education (CCE) calls upon all social and political actors, as well as institutions, to understand the seriousness of the underlined phenomenon of extremist and radical discourse in Montenegro. 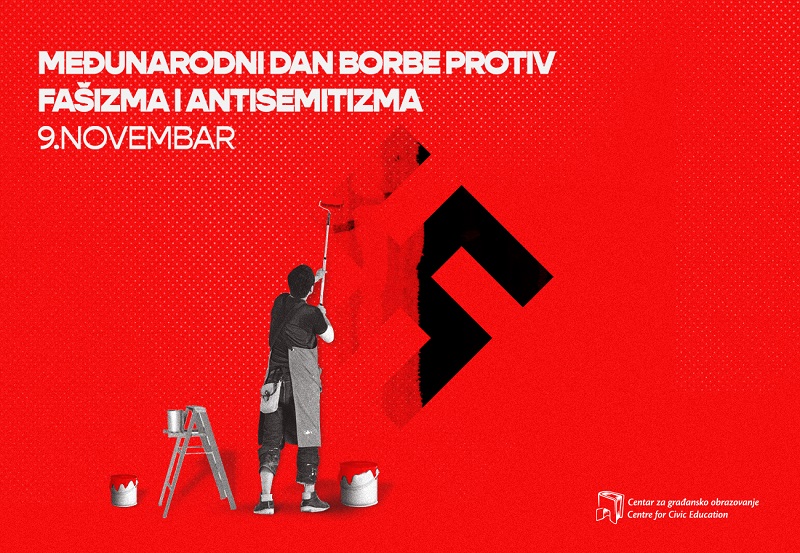 Propagation of a narrative that is essentially directed against the cultural values ​​of the modern anti-fascist world and the use of populist ideas to obtain short-term political gain can have far-reaching consequences for an already chronically and deeply divided Montenegrin society. Some signs of this are already visible through the strengthening of extremist factors of different profiles and their public speech.

Instead of fighting for a civic and open society, we are witnessing that socio-political turbulences in this period have been marked by extreme religious and identity tones. Insults on national and religious grounds, as well as media and online harassment of anyone who thinks differently, have become part of our daily lives, followed by incidents targeting minorities and political dissidents.

CCE warns about the danger of reaching a situation in which personal convictions and beliefs will take precedence over constitutionally guaranteed rights and scientifically established norms. We remind that such a context preceded all the misfortunes that befell Europe in the XX century, especially the catastrophes of the Second World War and the Holocaust, but also the regional setbacks and horrors of the 1990s. It is worrying that even today, certain social and political subjects are not aware or consciously ignore the impact that emphasizing such a discourse may have on the spread of interethnic and interfaith intolerance.

CCE calls upon the new parliamentary ruling majority, but also the new opposition, to demonstrate understanding for the sensitivity of this moment and to make efforts to reduce the consequences of the outpouring of intolerance towards the different ones, especially bearing in mind the challenging times of instability and insecurity brought by the pandemic and accompanying inherited economic problems.

The new government must continue nourishing and promoting anti-fascist values, which are recognized as the foundations of modern Montenegrin society but also to recognize all the harm that any politically-charged attitude towards that issue can have on society. The state of Montenegro is based on tolerance, respect for diversity, multicultural harmony and anti-fascism. Any threat to this fabric could damage the stability, democratization and progress of Montenegro. In this regard, the CCE previously initiated and signed with the Ministry of Education a Memorandum on Cooperation on the improvement of  teaching process related to anti-fascism and anti-fascist heritage to prevent the spread of non-institutional and unscientific disclaimer. Also, the CCE recently signed a Memorandum on Cooperation with the Montenegrin Cinematheque to preserve the values ​​of anti-fascism. The CCE will continue to insist on this issue and to make public policy proposals to strengthen the principles of anti-fascism and suppress the phenomena of radicalism and extremism.

The International Day against Fascism, Anti-Semitism and Xenophobia is celebrated throughout Europe on 9 November in memory of  “The Night of Broken Glass” ( German “Kristallnacht”), an event that took place in Nazi Germany in November 1938, later called the Holocaust.