“The dissatisfaction and concern about the situation in the country are growing, the Government has failed to legitimize itself as inclusive. It is not perceived as one with reform capacity, nor the Government or any individual ministry has managed to get a grade of three in the assessment of citizens. The Prime Minister is among the worst-rated members of the Government, 43% of citizens do not trust him and 32% partially trust him, while the Agreement between three leaders was generally not respected by anyone”, indicated some of the research findings presented today within a joint initiative of the Centre for Civic Education (CCE) and the DAMAR agency – MNE Pulse. 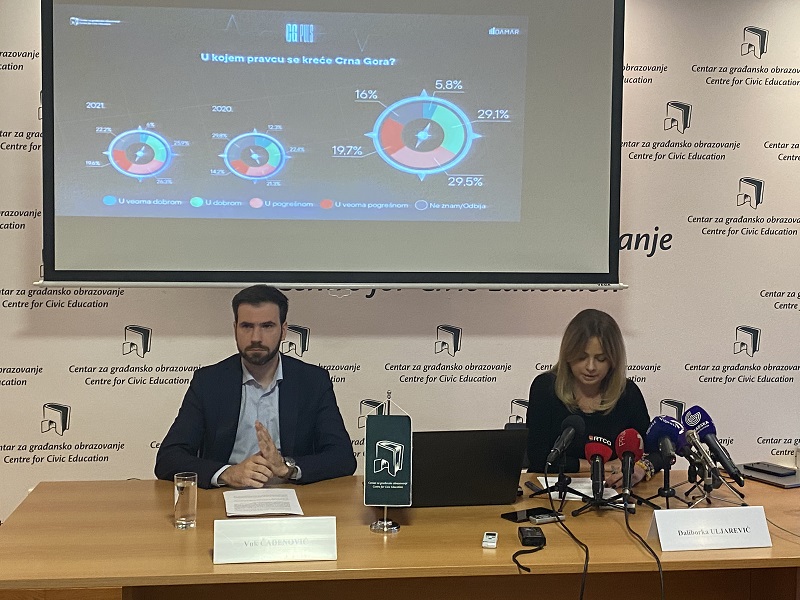 Daliborka Uljarević, Executive Director of the CCE, pointed out that the dominant majority of citizens (56.3%) assess the situation in the country as rather worrying, unlike the one-fifth (20.3%) that notes some form of development, and one-seventh (14.4%) who assesses that the situation is stable. Almost half of the respondents (49.2%) consider that Montenegro is moving in the wrong direction, while 35% think that this direction is good. “The new ruling majority has not found a common ground with minorities who feel isolated. Overall, when it comes to assessments of the situation in the country and the direction of its movement, on the one side there are minorities (Bosniaks, Muslims, Albanians, Croats) and most Montenegrins, who express different levels of concern, and on the other side Serbs feel more comfortable with the current situation. Also, it is noticeable that as the level of education grows, so does the dissatisfaction with the situation in the country”, explained Uljarević.

“Even among the members of the Government, there are no ‘straight-A student’ or very good ones, while the work of Milojko Spajić, the Minister of Finance and Social Welfare, was rated the best, with an average grade of 3.05. He is followed by Jakov Milatović, Minister of Economic Development (2.89) and Tamara Srzentić, Minister of Public Administration, Digital Society and Media (2.86). For one year of work, Vesna Bratić, Minister of Education, Science, Culture and Sports (2.51) and Ratko Mitrović, Minister of Ecology, Spatial Planning and Urbanism (2.47) got the lowest grade from the citizens of Montenegro. It is interesting that Prime Minister Zdravko Krivokapić is among the three lowest-rated members of the Government – with an average grade of 2.57 ”, states Uljarević.

Part of the research was related to the perception of citizens about the character of this Government, based on oppositional claims for which citizens were asked to choose which one they prefer. “The findings indicate that this Government is perceived by the majority as conservative, clerical, revanchist, amateur, as well as that it does not introduce a reform course, ” Uljarević summed up. 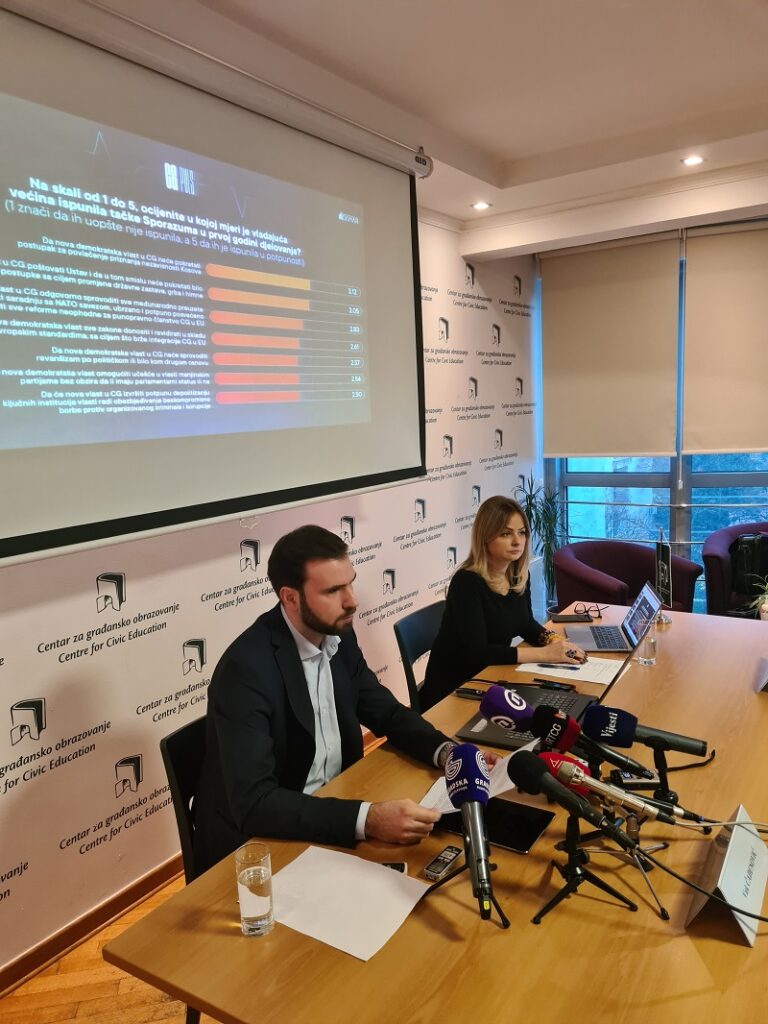 The largest number of citizens, over one-third (34.5%), did not know to state any advantage of the Government, while 8% firmly state that the Government has no advantage. Those who note certain advantages of the Government list their focus on citizens (16.6%), commitment to work (13%), and the fact that its members are experts and not politicians (11.6%).

Citizens are much more determined when it comes to the bad sides of the Government, thus, slightly less than a quarter (22.5%) as the biggest shortcoming, points out the lack of experience in managing public administration, followed by a focus on religious and identity issues (16.5%), weak political support (15.6%) and employment-based on party and nepotistic connections (13.6%).

Among the factors that affect employment in the state administration, every fourth citizen of Montenegro (24.7%) cites party membership, then kinship, friendship and similar relationships with members of the Government (22%), and then education and work experience (20.8%). Almost 12% of citizens believe that religious affiliation is an important factor, and 8.5% cite national affiliation as influential.

“In line with the perception of employment factors, citizens predominantly do not recognize the progress in the professionalization of public administration. Thus, almost 40% of citizens think that everything is the same, except that other ruling parties employ their people, while 23.6% think that it is worse than during the previous government. Some 22.7% of citizens believe that things change for the better and that education and experience are valued independently of party and other affiliation. Among those who note certain improvement, the number of those nationally identified as Serbs is above average, while Montenegrins, Bosniaks, Muslims, Albanians and Croats are dissatisfied“, said Uljarević.

Citizens also have a divided opinion on the transparency of the work of the Government. While 33.5% of citizens consider that everything is the same as before, 29.8% assess that it is worse than during the previous government, and a quarter (25%) of citizens said that this Government is much more transparent than the previous one.

Vuk Čađenović, Executive Director of DAMAR, commenting on the citizens’ assessments on the commitment to the priorities stated by Prime Minister in his written speech, notes that the Government got the highest average grade (2.93) for commitment to the issue of freedom of religion. “Promises that healthcare will be dedicated to the patient and focused on the fight with all health challenges, justice and equality of all citizens, regardless of their financial status or beliefs are statistically significantly below (2.53). The commitment to reducing the cost of public spending, and protection of a healthy environment were rated the lowest (2.43 and 2.42)”, said Čađenović.

The Agreement concluded between the three leaders after the elections is just a dead letter for 31.2% of citizens, while 28.8% think that the Government has partially respected it and 16.5% state that it is the key guide in the work of the Government.

“After a year of work of the Government, the best-rated clauses of the Agreement in terms of implementation is that the new democratic government in Montenegro will not initiate the procedure for withdrawing recognition of Kosovo’s independence, and the weakest that the new Government will completely depoliticize key Government institutions to ensure the uncompromising fight against organized crime and corruption“, said Čađenović. 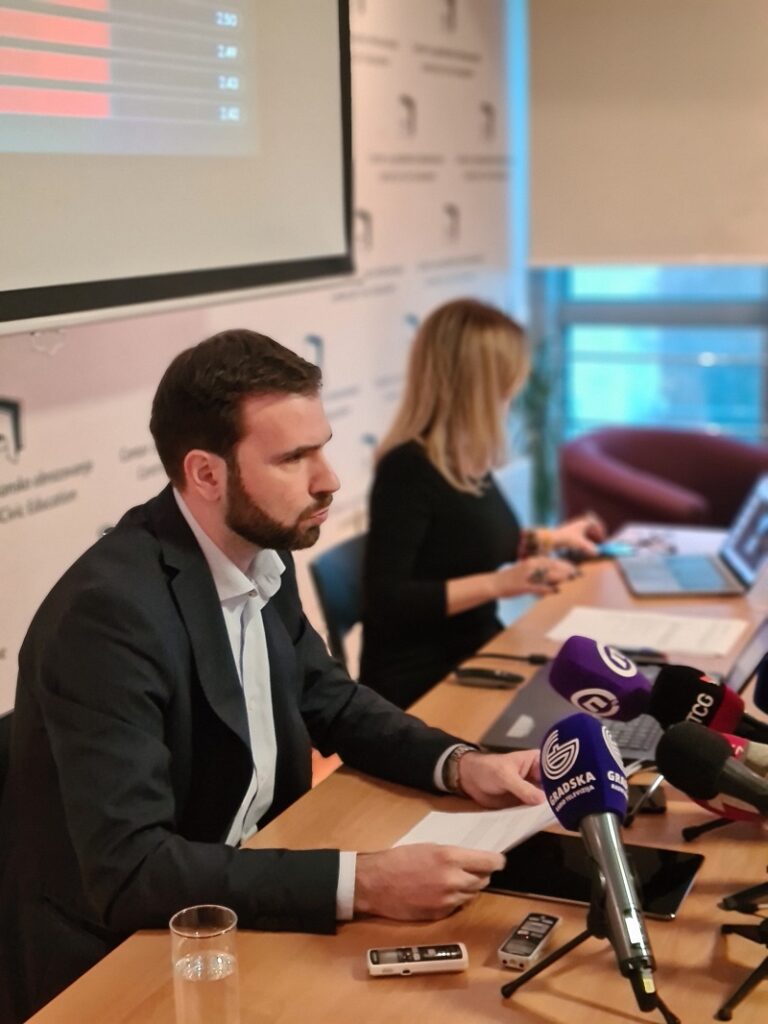 “Citizens generally believe that the policy and activities of the Government are determined by the agreement of the ruling majority (17.7%), then that the Prime Minister has a decisive influence (11.8%), and then URA (11.4%), while the Serbian Orthodox Church (SOC) is cited by 10.7% of respondents, and a quarter do not have an opinion on that”, underlines Čađenović.

In the part of the research on individual programmes and policies, 82.4% of citizens state that they have heard of “Marshall Plan – Europe Now”, and 41% of respondents consider it a good and realistic programme, while 38% think it is unrealistic in this economic framework.

“The decision of the Government to register the Cetinje Monastery in Cadastre as the property of the SOC is considered logical and grounded by 31% of the respondents. However, 44.4% of citizens believe that this decision proves that the Government works in the interest of the SOC, and not in the public interest. Every fourth citizen does not have an opinion on this issue,” says Čađenović.

Finally, almost a third (29.3%) of citizens believe that none of the vulnerable groups was in the focus of the work of this Government, about 14% cited young people, while 11.8% state that it was women.

On a scale from 1 to 10, the average grade given by citizens to Government policies and measures in the fight against the pandemic is 4.42.

“Almost 60% of citizens do not support the fact that the Prime Minister refuses to get COVID-19 vaccine, while 23.7% of citizens have the support for vaccine rejection”, concluded Čađenović.

MNE Pulse is a joint initiative of CCE and DAMAR agency aimed at creating an environment in which decisions relevant to the strategic shaping of society towards democratization and Europeanization will be made based on reliable data and thorough analysis. The intention of DAMAR and CCE is to help everyone who wants to focus on citizens through empirical data, which are published monthly, and which should consequently lead to improving the quality of public debate on important issues, but also raising the level of responsibility of all stakeholders.

The research was conducted from 16 to 24 November 2021, with the application of the CAPI method on a three-stage stratified random sample that consisted of 1012 Montenegrin citizens.