On the occasion of 3 May  – World Press Freedom Day, the Centre for Civic Education (CCE) wishes to congratulate to all media, media associations and journalists. Although there is no essential reason to celebrate, this day is an opportunity to pay tribute to the media and media representatives who do their job professionally and with integrity, regardless of the difficult circumstances in which they operate. The institutional track record in the area of media freedom is poor, and international reports, such as those from the State Department and the European Commission, warned about that. 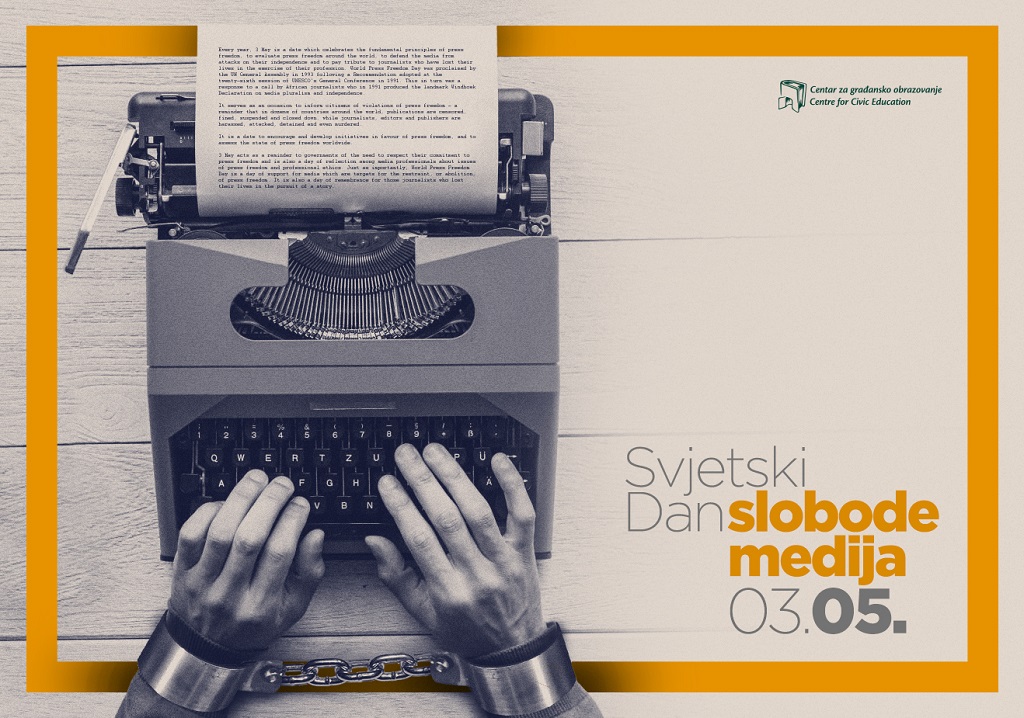 The media scene in Montenegro remains polarized and politicized, overshadowed by unsolved attacks on journalists and media assets, as the perpetrators and executors in many cases remain unknown. In 2021, the CCE recorded 21 attacks on journalists[1], and in 2022 additional four attacks[2]. The most serious previous cases have not yet been solved – the murder of the co-owner, director and editor-in-chief of the daily Dan, Duško Jovanović (2004), the attempt to murder a journalist of the daily Vijesti and the weekly Monitor Tufik Softić (2007) and Vijesti journalist Olivera Lakić (2018).

There is still the so-called soft censorship in the media sector, reflected also in the example of the decision of the previous Government of Zdravko Krivokapić during its technical mandate. Unfortunately, neither the Government nor the Agency for Protection of Competition have yet publicly explained the procedures by which it was decided to support three media, and the others not. By granting state aid to the media discretionarily and non-transparently, the former Government of Zdravko Krivokapić continued, in this area as well, the bad practice of the previous DPS Governments, which was often and well-founded criticized. It remains to be seen how the provisions of the Media Law regarding transparency of advertising and other forms of public funding of the media will be applied. Long-term research of the CCE indicates that the financing of media from public funds, through various forms, is directly related to how media report on government decisions and activities, i.e whether they take a critical or supportive position.

RTCG remains one of the neuralgic points in the field of media freedom for years. In the previous period, the controversial election of Boris Raonić as Director General contributed to that, and in that participated, as members of the RTCG Council, also employees of the NGO Civic Alliance and their business partners. Furthermore, there are problematic pieces of TVCG and polls on RTCG.me that relativize Russia’s aggression against Ukraine. The interested public also reacted negatively to the decision of the Director General to dismiss Vladan Mićunović, whose credibility as a journalist and editor is unquestionable, from the position of editor of the TVCG foreign policy redaction. These are just some of the consenquences of poorly applied amendments of the Law on RTCG, which did not ensure the independence and plurality of the RTCG Council, thus continuing the trend of political influence on RTCG, only with a change of actors in line with the last parliamentary elections.

Media self-regulation is ineffective, and the Electronic Media Agency (AEM) as an independent regulator fails to achieve complete independence, impartiality and non-selectivity in its work.

The low level of media literacy is burdened by portals and social media that are the least regulated area, and whose impact, even negative, is growing in Montenegro. Dissemination of disinformation and hate speech is also noticeable through the influence of a part of the media from Serbia, and some of them have been temporarily banned from broadcasting on the territory of Montenegro by AEM.

With a full understanding of the attempts of the previous Government of Montenegro to lay the foundations of the media sector in Montenegro within the framework of the Media Strategy as an umbrella document, the CCE doubts that such a document will significantly change the situation in the media freedom area. Hence, the new Government must be truly and concretely committed to strengthening media independence. Without professional and fact-based reporting, there is no rule of law, which is a pillar of democratization and Europeanization of Montenegro.