When it comes to understanding and accepting LGBT people in Montenegrin society, there is a generally positive, although somehow slower trend. This indicates a more mature and open approach, although in certain issues there is stagnation or even some regression, which can be explained by the wave of clericalization and radicalization in the last few years. This is a warning for everyone because it is clear that the struggle for human rights is continuous and that backward narratives and practices can easily slow down or reverse this process, as emphasized at the presentation of the results of a public opinion survey on perceptions of LGBTIQ persons at Centre for Civic Education (CCE). 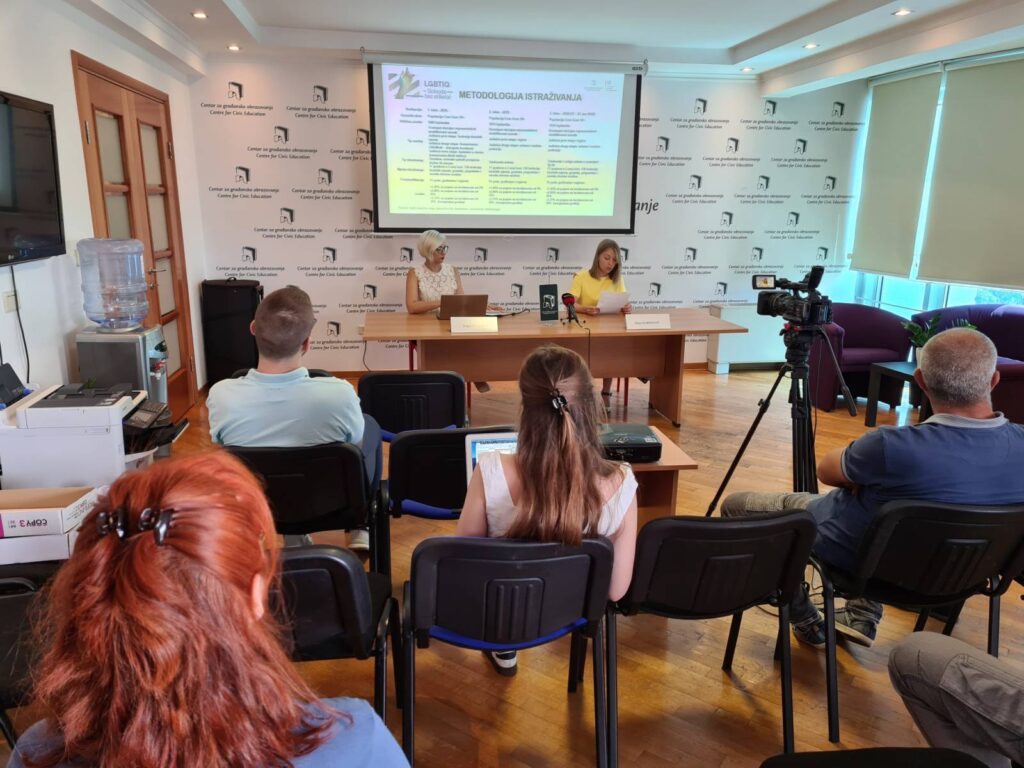 Maja Marinović, programme associate at the CCE, explained that the aim of this research is “an analysis of the level of social acceptance of LGBTIQ persons in Montenegrin society, but also an evaluation of the work of competent institutions, civic society and the effects of existing policies to improve the overall position of LGBTIQ people and their acceptance in society ”.

Željka Ćetković, the coordinator of the Active Citizenship programme at the CCE, presented the research findings in detail.

‘’The public’s attitude remains polarized in assessing respect for the rights of LGBT people in Montenegro, every second respondent knows an LGBT person, and in general perception, every second person believes that the story of the LGBT community is “exaggerated” and that this phenomenon is accepted as normal in the civilized world, which is positive, although there is a small decrease in percentage compared to the last wave. It is also positive that the number of those who believe that people of different sexual orientations are harmful and dangerous is continuously decreasing“, said Ćetković.

“Opinions are divided also concerning the representation of topics related to the position of LGBT persons in public. However, now there are a few more who think that this issue is being talked about enough. Almost half also think that it is useful in public discourse to hear a scientific explanation of different sexual orientations in order to better understand this phenomenon. On the other hand, compared to 2019, there is a significant increase in those who think that these stories are unnecessary in public space and would not help, and despite the scientific interpretation, this phenomenon remains extremely harmful for any society. It is also good that the percentage of those who see learning about LGBT persons as an opportunity to find a way to fight against them is decreasing“, she explained.

A special segment was related to confronting stereotypes with real situations. In this context, almost three-quarters of respondents prefer to choose a top doctor of a different sexual orientation than the average surgeon of heterosexual orientation, which is at the level of 2019, with a slight decrease, and certainly significantly more than in 2016.

“In a hypothetical situation, if one day they found out that their child was homosexual, almost a third of citizens would support their child fully, a tenth partially (so that this stays in the family circle), and two-fifths would try to help through treatment. This data is encouraging because it is one of the most sensitive questions and reactions of the respondents “, stated Ćetković, specifying that women are significantly more inclined to fully support their children of homosexual orientation.

“Attitudes that justify verbal or physical violence against LGBT persons continue to weaken, which is a confirmation of the effect of those who fight against violence against LGBT people. Half of the respondents believe that LGBT persons are a vulnerable group that needs help in exercising their rights, which is twice as much as in 2016. Also, the number of those who do not accept that LGBT persons are an integral part of our society is falling. The vast majority of citizens (more than 80%) would try to help a LGBT person if they witnessed violence against him/her. However, it is important to emphasize that the share of those who would not do anything out of the conviction that members of this population deserve it is small, and that it has halved compared to 2019″, Željka Ćetković emphasized. 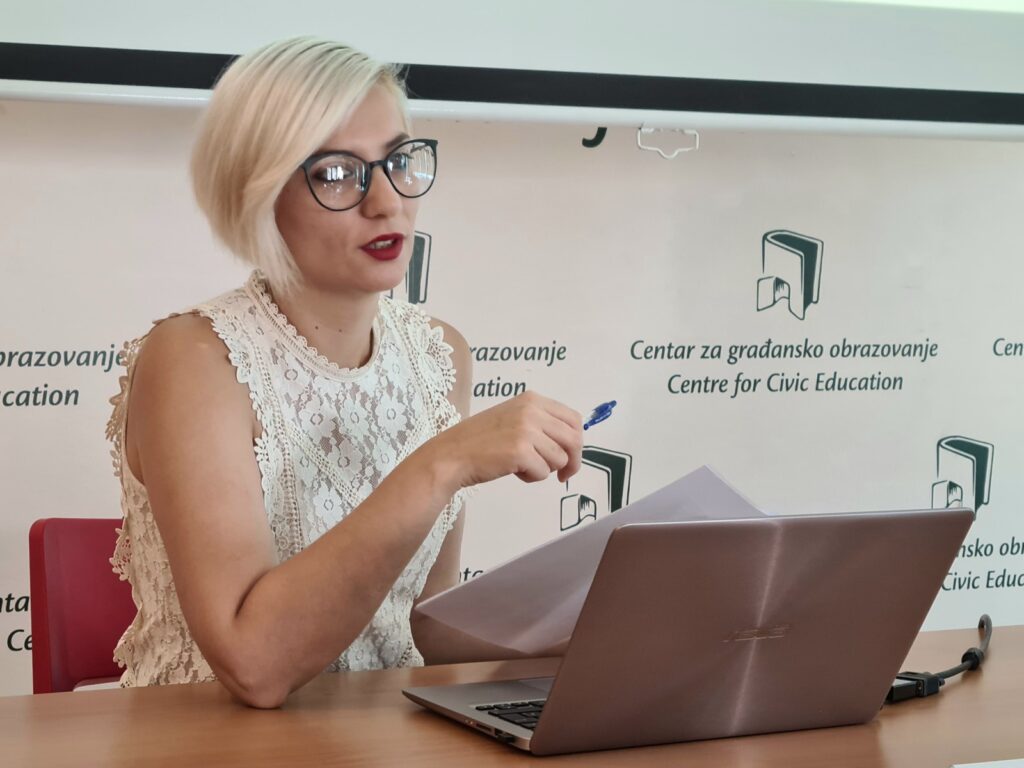 “Opinion on the possible homosexuality of politicians they support is similar to three years ago but far more tolerant than in 2016. Thus, slightly more than half of the respondents state that nothing would change in relation to the knowledge of politicians’ homosexuality, and there is an increasing number of those who state that they would have more respect for that person, because of the courage to be honest. The number of citizens who would be even more supportive of the political party they are in favor of if it were to deal with LGBT rights is growing. In that regard, compared to 2016, far fewer people would give up their political option if it started to be interested in the rights of people of different sexual orientations”, said Ćetković.

The attitude towards the Pride Parade is the same as three years ago, and more than half of the citizens believe that it is organized to point out discrimination against the LGBT population. This differs significantly from the public attitude of 2016, when every second citizen believed that the Parade was held to demonstrate sexual orientation.

Among the citizens of Montenegro, the prevailing opinion is that transgender persons (persons who were assigned different sex at birth in relation to the gender they feel as their own) should have the right to change their gender in personal documents only on the basis of self-determination (without surgical gender reassignment).

The Ministry of Human and Minority Rights and educational institutions are seen as the most influential institutions in reducing and suppressing homophobia in society, followed by non-governmental organizations and the prosecutor’s office. The work of the Ombudsman in the field of protection of LGBT rights was best evaluated, followed by the Ministry of Human and Minority Rights and the police. “We at CCE hope that these institutions will focus on this in the upcoming period, i.e. make stronger efforts to sensitize and inform citizens to prevent radicalization of attitudes and contribute to improving the position of LGBT people in Montenegro, but we also expect a greater degree of responsibility in making public decisions“, stated Ćetković. 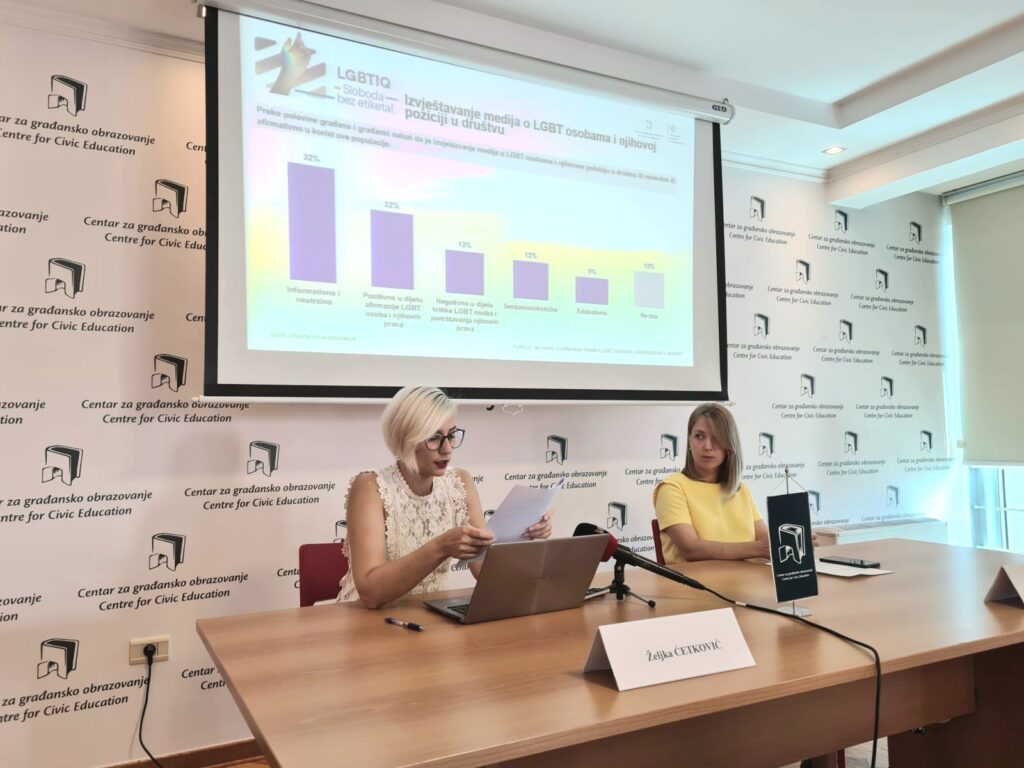 Three-fifths of citizens rate the work of NGOs in the protection of LGBT rights at least as good, and more than a third even as very good or excellent. A total of 60% give the best marks to the non-governmental sector, which is significantly more than 49% of the best marks given to the first-ranked state institution for its contribution to the protection of LGBT rights.

“Given the positioning of religious communities, in the last period, we were interested in whether citizens appreciate that their opinion should be taken into account when creating laws and policies related to this population. Positions are somewhat divided, but the prevailing view is that politicians and other decision-makers should not take it into account. This is very important, having in mind that the attitudes of religious communities are quite rigid and limited for the modern concept of human rights“, said Ćetković.

Expert support in the implementation of this research was provided by the Ipsos Strategic Marketing agency. The survey was conducted from 17 to 23 June 2022, on a sample of 1,012 adult respondents, in 17 cities in Montenegro.

The presentation was organized as part of the contribution to the marking of the International Pride Day of LGBT people, within the project “LGBTIQ – Freedom without labels!” implemented by the CCE with the financial support of the Ministry of Human and Minority Rights.