We got used to living with COVID19, we did not get the messages out or improve the legislative framework and practice, and there is a lack of responsibility as well as a lack of stories about heroes from the healthcare system during the pandemic, it was concluded at the second panel of the event “Montenegro and COVID-19 – thirty months of battling or coexisting”, organized today by the Centre for Civic Education (CCE) with partners as part of the SOLICO project, in the Europe House in Podgorica.

Siniša Bjeković, Ombudsman, in his commentary on the decisions of the Czech courts and the European Court of Human Rights on conditionalizing the enrolment of children in school with vaccination, states that this and other judgments must be viewed from the spectrum of convention law, which, in addition to the right to private life, provides optional restrictions that the state can apply. “At least two grounds – protection of public health and protection of the rights of others – served as an argument by which the European Court stated that there was no injury in relation to families, that is, that the higher interest is contained in the protection of the health and rights of others”, he explained. Bjeković pointed out that the restriction must be based on the law and have a legitimate goal. “At this time, we were champions in the inequality of the application of state authority and respect for the rights of individuals – neither did we have equality in all cases, nor was that equality expressed in legal or social standards. That’s why I think it is high time that we organize ourselves from a legal and strategic point of view and intervene more meaningfully and precisely when it comes to the legal basis”, said Bjeković. “The quarantine in Montenegro was a deprivation of liberty and that is the answer we received through expert analysis that helped us understand the essence of the quarantine”, he stated. He sees the responsibility for the fact that the complaints of seamen due to the determination of quarantine in some cases have not been resolved even after two years, in the state and believes that this requires the determination of responsibility. 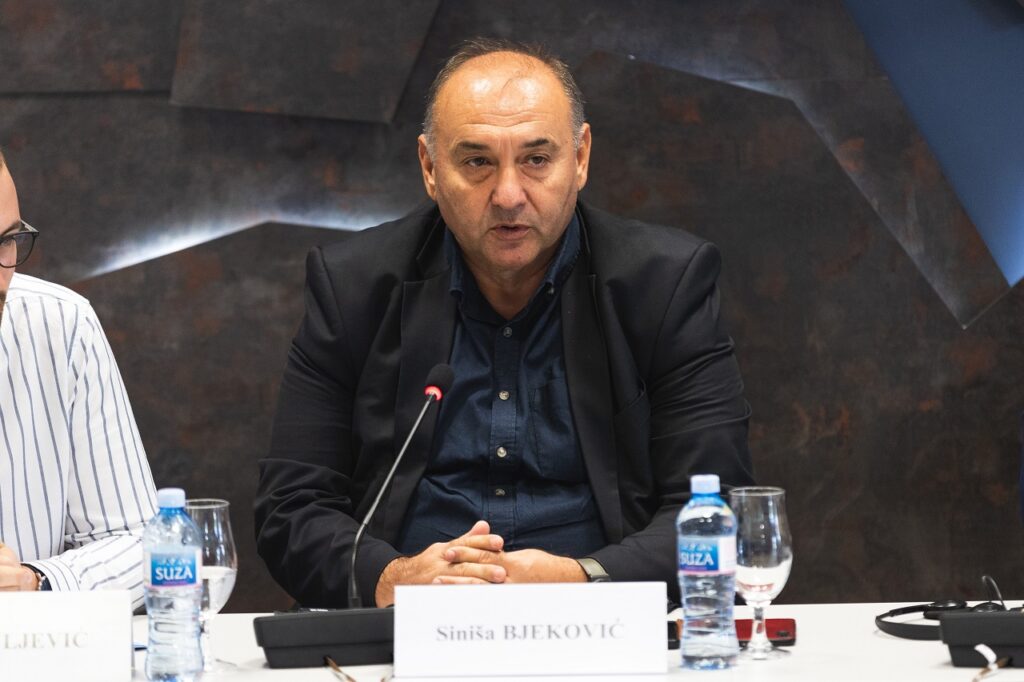 Andrija Vojvodić, Judge of the Court for Misdemeanours, reflected to the beginning of the pandemic, which introduced restrictions on the functioning of institutions and citizens. “We all remember that after the declaration of the pandemic, the Government called for compliance with the rules and measures to prevent the transmission of the virus. With these measures, the state limited our way of life by prescribing new rules, which led to the restriction of some of our rights. Primarily, upon the adoption of those orders, the violations constituted a criminal offence under the jurisdiction of basic courts and prosecutor’s offices. Many were sentenced to effective prison sentences, which I do not think were effective”, he said. He stated that during the pandemic, the misdemeanour courts worked at full capacity, scheduling and holding trials, without working from home. “Due to compliance with the measures, there were delays. However, I believe that it was not to the detriment of the citizens in terms of resolving the proceeding”, he said. He explained that conducting online proceedings, which the law allows, was not possible due to the lack of equipment. “In sanctioning, we considered that draconian punishments should not be applied, based on the idea that milder punishments and reprimands affect the persons who violated the measures, but also all other citizens” he concluded.

Slađana Vujačić, Deputy Mayor of the Capital City, believes that during the pandemic, the role of local self-governments, but also the citizens themselves, was underestimated, through dominant reliance on health authorities. “Local self-governments have a large number of people in their system, but also extensive communication with citizens, and there was no interest in our experiences and opinion about it. The pandemic required major changes that included the education of people from our administration and the use of equipment that was not available at one point, as well as the reorganization and maintenance of the functioning of the system”, she said. “Podgorica must have a general or city hospital as soon as possible”, emphasized Vujačić, in response to a question that was raised during the first panel. “Although local governments are not responsible for the construction of health facilities, and hence also city hospitals, the absence of which proved to be a major drawback in the pandemic, this is no excuse because we have a responsibility to improve the quality of life of citizens. However, despite the proposal to assign the plot to the health care system for these purposes, we did not receive an answer”, said Vujačić. 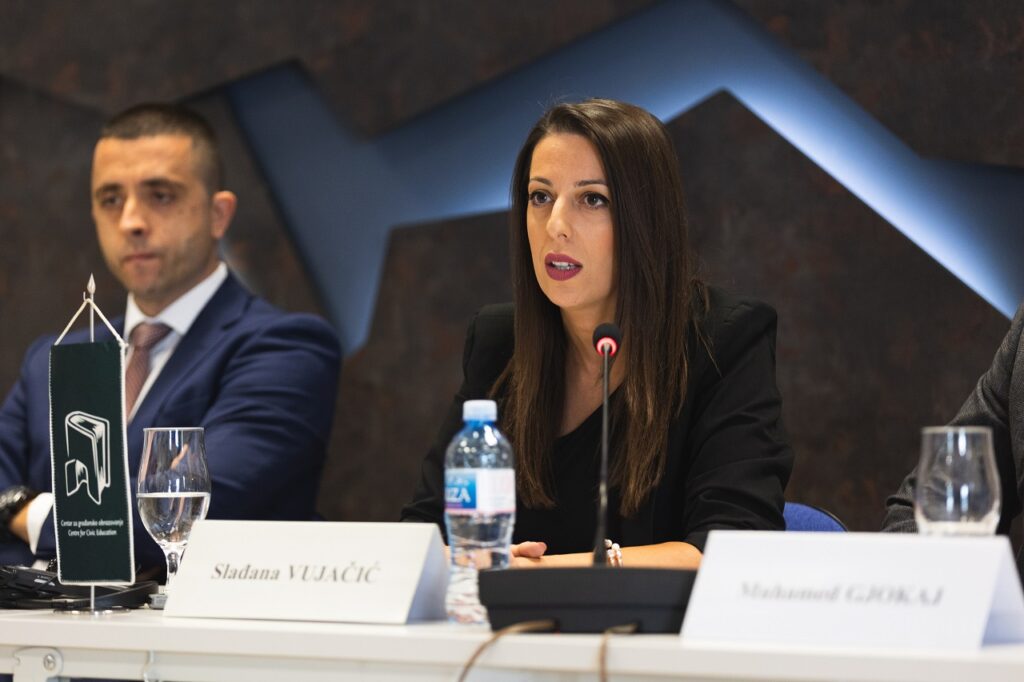 Nikolina Tomović, Teaching Assistant at the Faculty of Law of the University of Montenegro, pointed out that the faculty quickly responded to the change in the teaching model. “Both students and professors made joint efforts to hold classes in an online format. Certain challenges were noticed when it comes to the quality of teaching, as over time, a smaller number of students followed online classes, which only illuminated the earlier problem – that a small number of students also attend classes in amphitheatres. It seems that the capacity for online learning has now strengthened, but that there is a need for more of it to take place at the university. The balance between traditional and online learning methods is the optimal solution for improving teaching in the period to come”, she advised. On the question about why there is a lack of a stronger voice of the academic community concerning these topics, she assessed that “there are also frequent examples when the reactions, attitudes and opinions of members of the academic community were instrumentalized to achieve political points, which is why they also shy away from publicly communicating positions that ultimately do not result in essential appreciation”.

“The world has been facing the challenge of a pandemic, and so has Montenegro. There were difficulties in finding an adequate answer when it comes to the protection of privacy, i.e. human rights”, said Muhamed Gjokaj, member of the Council of the Agency for the Protection of Personal Data and Free Access to Information (APDP), commenting on the Government’s decision, based on the opinion of the APDP, at the beginning of the pandemic, to publish the full names and addresses of persons to whom the self-isolation measure was imposed by the competent inspection authorities, which was later annulled by the Constitutional Court. “There were difficulties in finding an adequate answer to the protection of privacy, i.e., the protection of personal data. The right to implement and respect human rights and the right to security and the fight against the pandemic are not contradictory but complementary. Simply, we could have applied, or at least copied the practice of the European Union or EU countries and found a solution to the problem of publishing names, and later to the creation of applications and publishing the geolocation of people in self-isolation, behind which we do not know who stands”, he said. 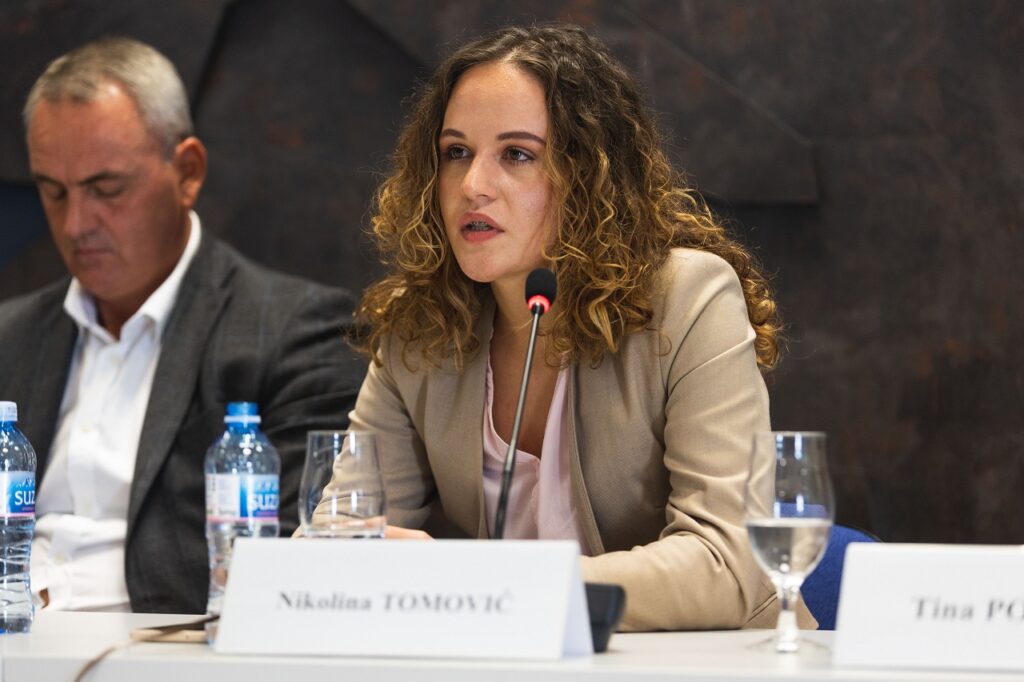 Tina Popović, Editor in the daily Vijesti, stated that the crisis also pointed to shortcomings within the media community. “In recent years, we have seen the expansion of social networks and electronic media with dubious imprints or without any, on which anything can be read, and which are available to citizens. Thus, in this crisis, everyone was their own chosen doctor, giving definitions of the virus and overshadowing those who tried to explain the seriousness of the pandemic and the importance of immunization”, she stated. Popović emphasized the impact of the pandemic on the selection of news to be published, including the publication of lists of people in isolation that her media company decided not to publish in order not to contribute to the stigmatization of those citizens. She assessed that speed was often ahead of quality in the media, and real information was behind verified or semi-verified information. “At the beginning, we reported on the impact of the pandemic from all aspects. However, as time passed, and especially in the last year, politics took precedence over all social issues, and attempts to reach citizens on the topic of immunization and health were lost. We forgot about healthcare workers, everything became easier and maybe as media workers we got used to corona life. On the other hand, the problem of citizens with the institutions was a higher priority than the stories about heroes from healthcare in the pandemic”, she concluded.

This event is part of the SOLICO project, implemented by Land Steiermark from Austria in partnership with ten other organizations from nine countries, among which is the CCE as a partner organization from Montenegro, with the aim of creating a space for discussion and exchange of experiences between different social actors about the consequences of the crisis caused by the COVID-19 pandemic. Also, the project strives for networking both at the national and, later, at the international level, in order to apply the lessons learned and promote good practices widely. Within the same project, events have been organized in Graz, Varaždin, Maribor and Szombathely, and after Podgorica, and a similar event will follow in Sarajevo. The project is supported by the EU programme Europe for Citizens.