There is no improvement in the living standard of citizens since July of this year, the number of those who consider that Montenegro is going in the wrong direction is increasing, and the Government of Dritan Abazović is rated worse than the Government of Zdravko Krivokapić when the first initiative for a vote of no confidence to that Government was submitted in the Parliament of Montenegro. More than half of the citizens state that the work of this Government is below all expectations, 46.9% of citizens do not trust Dritan Abazović at all, and even 58.2% believe that he often changes his positions, while the prevailing views are that the Government was determined by the party and not by the interests of the citizens, that ministers are mostly focused on self-promotion, as well as that the Government was more focused on the interests of the Serbian Orthodox Church (SOC) than the state of Montenegro, are the key findings of the MNE Pulse presented today, published by the Centre for Civic Education (CCE) and the DAMAR agency, with positive developments when it comes to the perception of the work of the Special State Prosecutor’s Office (SSP). 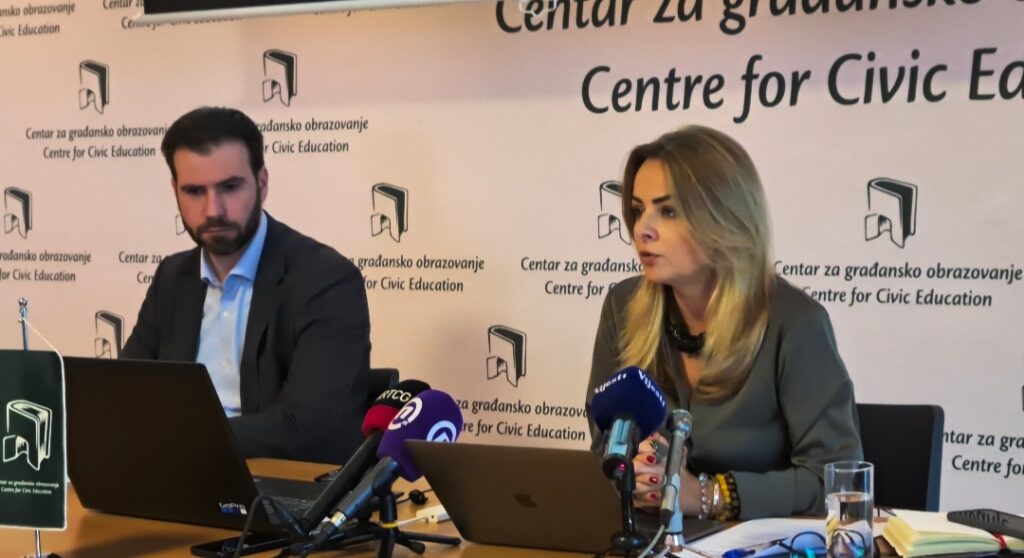 “Over three-fifths of citizens believe that Montenegro is going in the wrong direction, which is 6% more compared to July this year, that is, even 14% more compared to October 2021. On the other hand, 21 % of respondents consider that the state is going in good direction, which is at the level of July, but it is noted a decrease of 11% compared to the previous year”, said in reference to the results Vuk Čađenović, Executive director of the DAMAR agency.

“When it comes to trust in institutions, citizens trust the health system the most, then the police, and the education system. They have the least trust in political parties, and the Parliament and the Government of Montenegro are also at the bottom of that scale. The fact that the non-governmental sector is among the top five most trusted indicates a crisis in the legitimacy of institutions, because citizens are turning towards those who do not have institutional power”, Čađenović assessed.

The central focus of this MNE Pulse was the work and impact of the Government of Montenegro, which is in a technical mandate, hence measurements were made on a set of identical questions that were also used for the assessment of the Government of Zdravko Krivokapić in November 2021, which provided a comparative view.

“In general, the assessments of the work of this Government are worse than the evaluations we had in November 2021 concerning the Government of Zdravko Krivokapić, and that refers to the time when it had the first initiative for a vote of no confidence in the parliamentary procedure. Namely, the average rating given by the citizens to the Government of Dritan Abazović is 2.23, which is a slim two and even slightly worse than the rating for the Government of Zdravko Krivokapić, which had 2.28 in the November MNE Pulse. Additionally, more than half of the citizens state that the work of this Government is below all expectations, for a little less than a quarter is in line with expectations, while for only about 5% the impact of the Government exceeds all expectations. And this is a worse result compared to Krivokapić’s Government, with which were less disappointments in the period when it recorded probably the lowest trust”, stated Daliborka Uljarević, Executive director of the CCE.

There is not much progress in the field of transparency, so opinions remain divided, with 36.6% who assess that it is the same as before, 32.3% that it is worse than during the time of the previous government, and slightly more than a fifth (20.8%) state that this Government is much more transparent from the previous one.

“Total of 46.9% of citizens do not trust Dritan Abazović at all, a third partially trust him and only 5.5% trust him completely. Consequently, as many as 58.2% believe that Prime Minister Abazović often changes his positions, while only 17.4% believe that he is always sticking to the principles, whether someone likes it or not. Comparatively speaking, citizens had more trust in the word and consistency of Zdravko Krivokapić in November 2021, than in Abazović today, even though those results were bad for Krivokapić”, explained Uljarević. 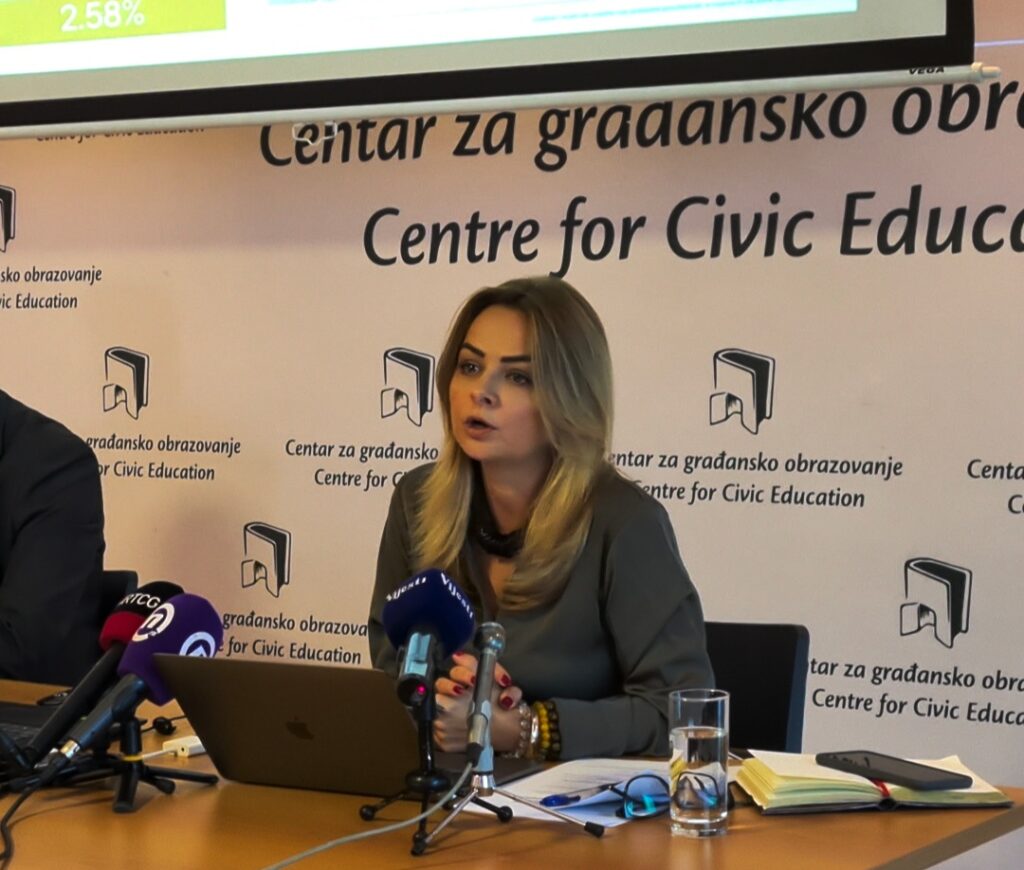 On the occasion of the appointment to the current position, the Prime Minister, in his exposé, listed five priority directions of action and promised that the Government he will lead will advocate for them. Citizens rated commitment to all those priorities, on a scale of 1 to 5, with less than three, whereas the fight against corruption (2.86) and freedom of religion (2.58) stood out the most, and the affirmation of children and young people (2.2) and sustainable development and environmental protection (2.21) being the least rated, while in between is a priority related to more sustainable investments (2.24).

“Over two-fifths (43.4%) of citizens believe that the Government should not finance private religious educational institutions, while less than a third (30%) have the opposite opinion, while 27% of respondents have no opinion on this issue”, said Čađenović.

“We asked the citizens how they see the way out of the current political crisis. The survey indicated that the majority of 53% believe that early parliamentary elections are the best solution, while 22% are of the position that President Đukanović should give the mandate to Miodrag Lekić so that he can form the Government, and about a quarter has no opinion on this issue’’, stated Čađenović.

Uljarević pointed out that the findings indicate a shift in confidence in the independence of SSP’s work, which she interpreted through the prism of an action that included a high-ranking official of URA and until recently the director of the Revenue and Customs Administration, Rade Milošević, as the research was conducted in a period when that action was known to the public.

“Thus, since the July MNE Pulse, the number of those who believe that the system started to work has increased from 12% to 17.3%, and the number of those who express reservations decreased from 37.4% to 29%. The trust that SSP can initiate proceedings against politicians who are suspected of having violated the law and that there are no untouchables for him has grown from 7.5% in July of this year to 18.2%, and the number of those who think that this approach is selective also decreased 49.6% to 44.1%, as well as the number of those who consider that SSP depends on politicians – from 24.6% to 20.2%. Also, in this context, bearing in mind the newly published EC report, it is worth pointing out that the EC sent an important message that “political leaders should refrain from statements that undermine the independence of the judiciary and the independence of the prosecution“, and I believe that this was directly addressed to the Prime minister and to actors close to him who are trying to create an atmosphere that they are the main in this fight, even though it is the job of other bodies and their competence is actually to ensure that those bodies work without undue pressure and influence, i.e. contrary to what was the approach of the Prime minister and his collaborators and this is recognized in Brussels. Such an approach by the Prime minister and his followers does not contribute to the public profile of the Prosecutor’s Office, and especially the SSP, as sufficiently independent and ready to do its job regardless of who may be the subject of the investigation”, concluded Uljarević.

“We also asked citizens whether, in their opinion, politicians enough address socio-economic problems. Even 80% of citizens believe that these topics are not in the focus of politicians, and only 8% have the opposite opinion, while 12% have no opinion concerning this issue“, said Vuk Čađenović. 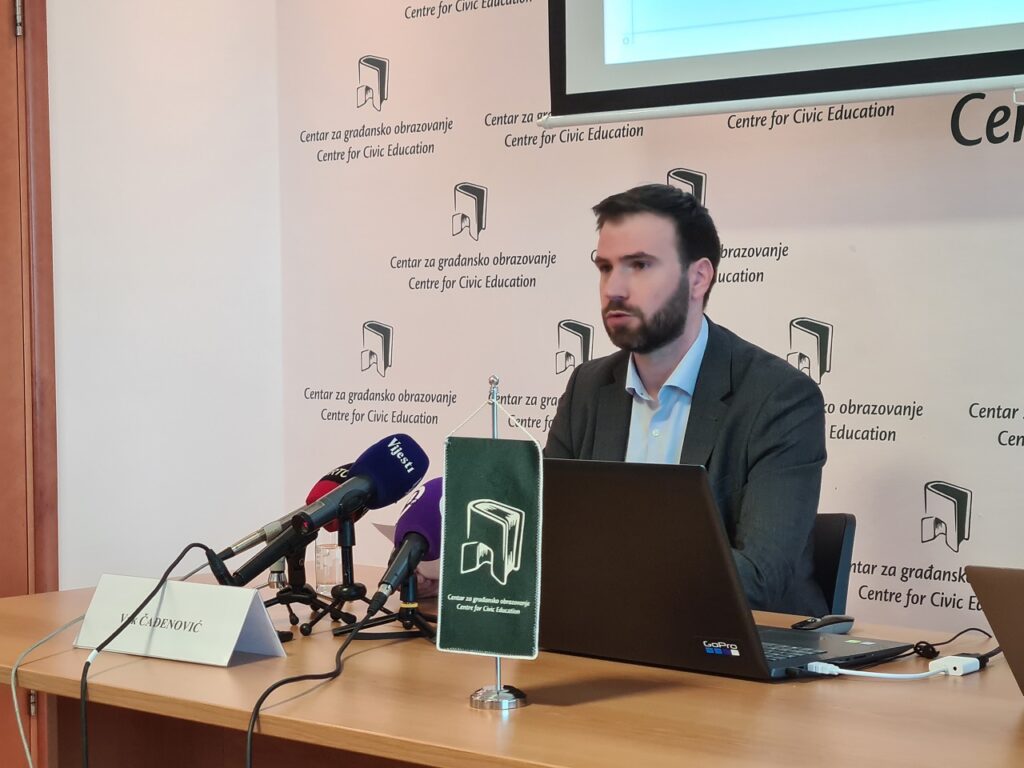 MNE pulse is a joint initiative of CCE and DAMAR with aim of using empirical data to help those who work on the strategic democratic shaping of society to make decisions based on reliable data and thorough analysis, keeping citizens in focus. In this way, the quality of public debate on important issues can be improved, but also the level of responsibility of all actors can be raised.

Data collection was done with the application of the CAPI method, from 1 to 10 October 2022, on a three-stage stratified random sample that included 1,022 citizens of Montenegro.