Citizens do not perceive developed accountability of politicians, they have divided opinions about the assessment of (un)constitutionality of amendments to the Law on the President, but they mostly believe there is no excuse for the violation of the Constitution. Getting out of the crisis is seen through early Parliamentary Elections, without mediation, while the Government of Dritan Abazović is supported by only 2.8% of respondents. EU stands as the key foreign policy pillar, and over a quarter of citizens have wish to leave Montenegro, mostly youth, who would mainly prefer to go to the USA or some of the member states of the EU. Lately, over half of our citizens have had direct experience or know someone from their surroundings who have faced a shortage of medicines, and a great per cent of them, almost a half, barely economically manage, these are some of the findings of MNE Pulse presented today, publicised by the Centre for Civic Education (CCE) and DAMAR agency. 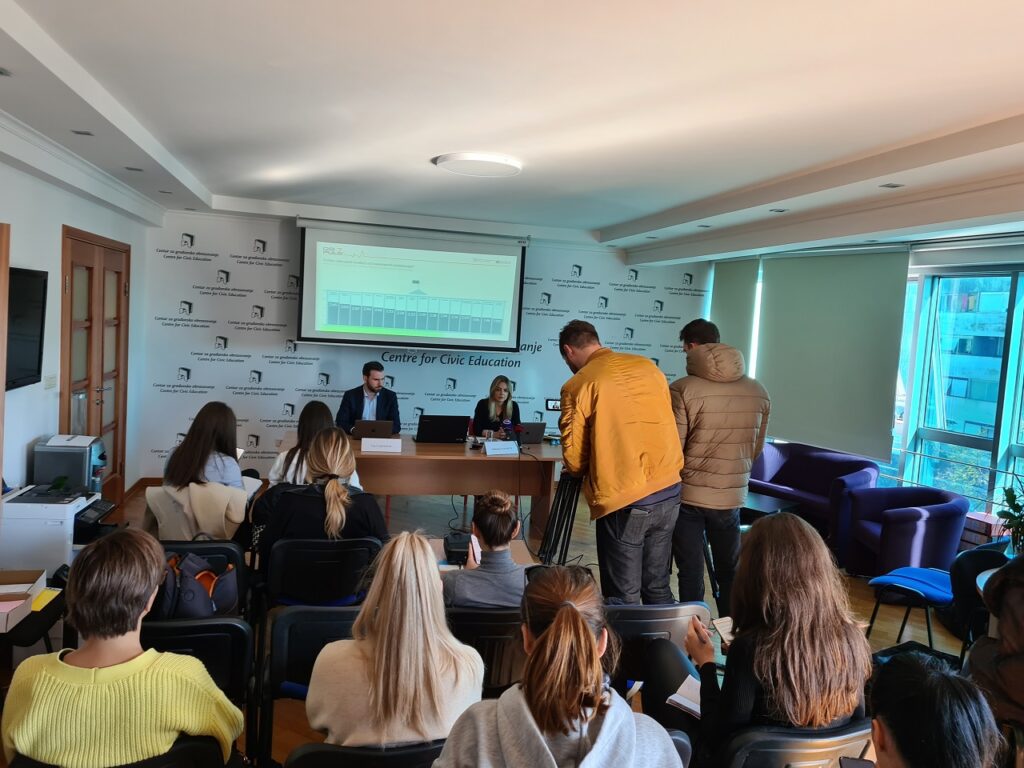 The latest MNE pulse points out that the confidence in the institutions in Montenegro is low, although it is somewhat better than in October, whereby the greatest confidence people have in the religious community (2.65), and the least in political parties (1.92). In that range, the order remains like earlier research, and, interestingly, the prosecution registers a slightly higher level of confidence than the judiciary compared to earlier waves of research.

„Responsibility is long-time lost category in our society, especially when we talk about politicians. Citizens recognize this, and they dominantly (76%) and beyond every difference based on gender, age, education, ethnicity and party affiliation, assess that politicians are not, completely or partially, ready to take on responsibility for their actions“, said Daliborka Uljarević, Executive Director of the CCE, in a more detailed reflection to the research findings, with the note that irresponsibility of politicians is estimated especially dangerous when it comes to executive power, that is the Government, then through party actions, and then in the Parliament.

“In the area of strengthening transparency and responsibility, the initiative that all of the business trip expenses of the officials, and exclusively of the members of the Government, are to be publicly announced monthly on the website of the Government and other relevant institutions, generates great support within citizens, so it is to be seen if the initiative will have a positive impact in the further communication with the politicians“, said Uljarević.

Even though the fight against corruption is one of the key goals proclaimed by the Government of Dritan Abazović in the technical mandate, there is a small number of those who view it as a sincere commitment or a reflection of the need for changes, while a significant number, more than a half, finds that this represents a wish for gaining party points or a mere revanchism towards the previous authorities.

“We were interested also in how would citizens of Montenegro vote at the referendum on the state and legal status of Montenegro, after 16 years of renewal of independence. That number is today higher than three-fifths (61.6%) of those who would support the independence, while around a fifth (20.3%) still supports the idea of a Union with Serbia, and less than a fifth does not want to take a position concerning this matter. As expected, those who declare themselves as Montenegrin, but also members of the minority people (Albanians, Muslims, Bosniacs) dominantly stand on a position they would vote for independent Montenegro, while the number of Serbs that support this standpoint is significantly lower. These numbers admonish that the consequences of the division based on ethnicity, the overcoming of which was not dedicatedly worked on in the past 16 years, but in accordance to the need of decision makers coming from different structures maintained and quite often are emphasized,“ explained Uljarević. 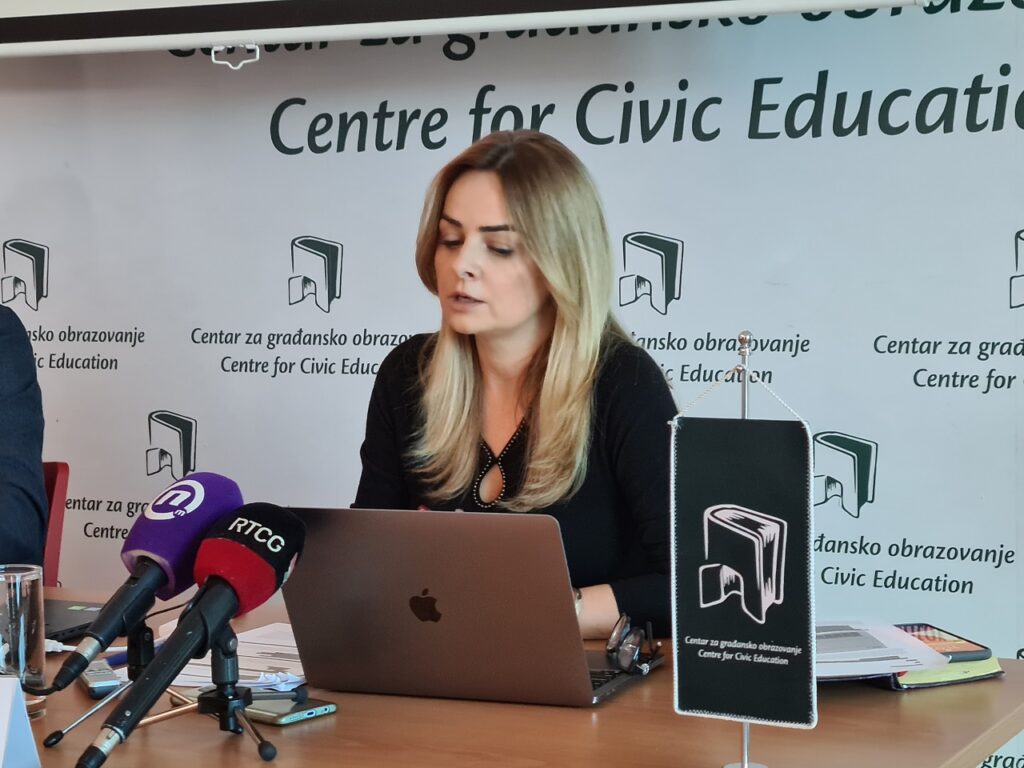 That the support for the independence of Montenegro is higher today than in 2006, indicates also the cross-section of the way the same respondents declared themselves on the referendum held in 2006, with a note that over a fifth of them have not voted in that year, and this mainly refers to the youth of different profiles who have not had the right to vote in that time.

“Voting the amendments to the Law of President by the Parliamentary majority from August 2020, which stipulate limitations to the jurisdiction of the President in the part referring to the procedure of electing the designated Prime Minister and appointing and recalling ambassadors, has been in focus for the past month. That decision was criticized as unconstitutional by a great number of domestic and international actors, while these amendments were defended by those who voted for them. Citizens have divided opinions concerning this issue, hence 37,9% of them stick to the line that the amendments are unconstitutional, and 33,9% stand on a position that these amendments are not unconstitutional. A great number of them (over 28%) do not address this issue based on publicly presented argumentation of the opposing sides. National affiliation and party preference significantly determine most citizens’ attitude about this issue, which indicates that this is one of those issues on which divisions in the country break down…“, stated Uljarević.

The majority of 46% stands on the position that it is not justified to violate the Constitution through unconstitutional laws when it is needed for some of the political groups who have the majority to conduct it in the Parliament, as the Parliament should be a barrier to the violation of the Constitution and all needs must be solved constitutionally and legally. On the other hand, 29.1% of the citizens consider that there are situations when it is essential to violate even the Constitution and that this has already happened before, while around a fifth (24.9%) does not have an attitude on this issue.

“The majority of citizens recognize early Parliamentary elections as the best model for getting out of the current political crisis – 33% of them, also, almost 30% of citizens believe that early Parliamentary and Presidential elections are the best model for getting out of the crisis, and the option of a new Government headed by a Government representative supported by DF, URA and the Democrats is supported by 19% of examinees. On the other hand, the current Government of Dritan Abazović is seen as the best model by only 2.8% of citizens,” stated Vuk Čađenović, Executive Director of the DAMAR agency.

“Interestingly, more than half of the citizens believe that an international mediator should not intervene in solving the political crisis in Montenegro, but that the politicians in Montenegro should find a solution to the current crisis themselves,” said Čađenović. “However, we also have 12.7% of citizens who believe that it would be good to involve a mediator from abroad, while 35% have no position concerning this issue. Of the 12% of citizens who believe that a mediator should be included, the largest percentage believes that the mediator should be someone from the USA and the EU (20.2% each), followed by Germany (17.6%) and Russia (15.7%),” he explained.

The main support from foreign political subjects for the majority of over 60% of citizens comes from the EU, while 14.7% believe that this is Serbia, i.e. 12.2% opted for Russia, and 8.9% for the USA.

“Within this MNE Pulse, some migration issues were also addressed, so we came across the data that the majority of 60.3% of citizens, of all profiles, see their future in Montenegro, while a little more than a fifth (21.4%) do not see it, and among them youth is dominant. Among the reasons for leaving Montenegro prevails a bad economic perspective (71.7%), but also the unstable political situation (19.8%) and other personal reasons (8.5%). Those who express a desire to emigrate mainly would like to live in the US or in one of the EU countries, especially in Germany, and the Nordic countries are also very desirable”, stated Daliborka Uljarević.

Half of the citizens believe that there are no objective and independent media in Montenegro and the majority consider that the media strengthen polarization and tensions in society through direct alignment with certain political opinions, as also indicated by the findings of this MNE Pulse. 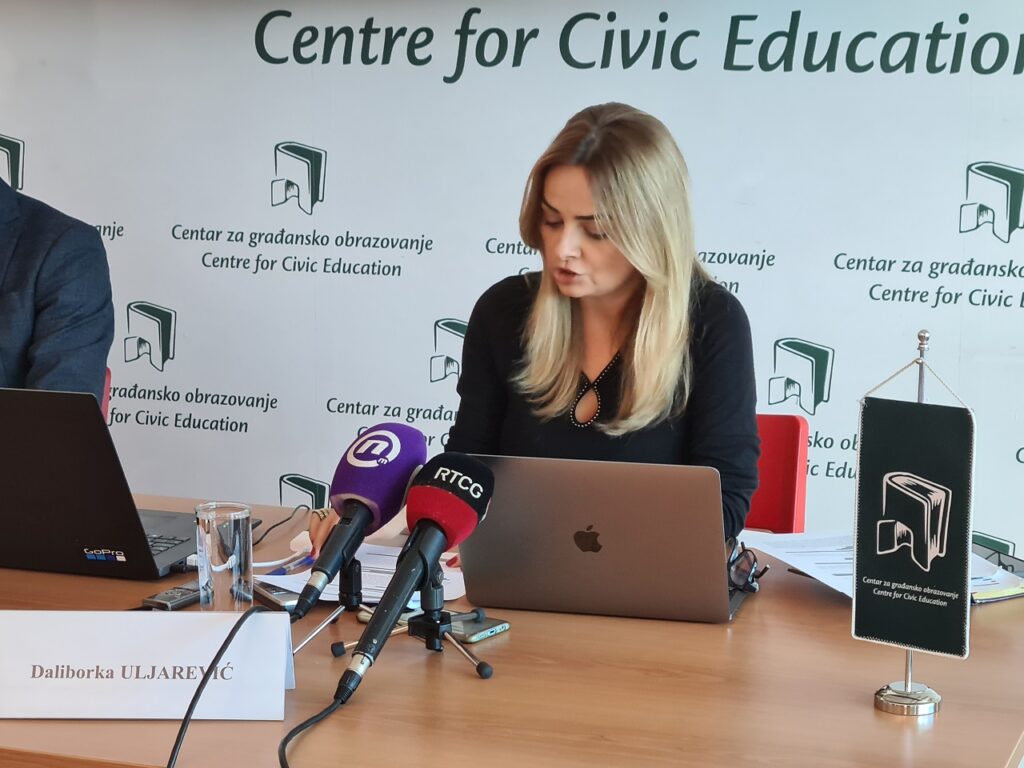 When it comes to living expenses and drug shortages, the largest percentage of citizens, almost half, barely make ends meet, and more than half have faced, or know someone who has faced a drug shortage.

“When it comes to the announced borrowing, the combination of bad politics in the country and global trends are most often seen as the cause. More precisely, 35% of citizens see it because of bad policy in the country and global trends, and 30% as a consequence of bad policy by decision-makers in Montenegro, while 23% see the global financial crisis as the cause of the new debt,” Čađenović concluded.

MNE pulse represents a joint initiative of the CCE and DAMAR aiming to use empirical data to help those who work on the strategic democratic shaping of society, and to make decisions based on reliable data and thorough analysis, keeping citizens in focus. In that manner, the quality of public debate on important issues can be improved, but also the level of responsibility for all political subjects can be raised.

Data collection was carried out with the application of the CAPI method, from 10 to 18 November 2022, on a three-stage stratified random sample that included 1007 citizens of Montenegro.